This is announced by election officer Prof. Murarilal Gupta at ABVP Central office, Mumbai. The term of both the newly elected office bearers will be for one year. They will take charge of their responsibilities in 60th National Conference of ABVP scheduled to begin from 14th Nov., 2014 at Amritsar (Punjab).
Dr. Nagesh Thakur basically belongs to Joginder Nagar in Mandi district of Himachal Pradesh. Since his student life, he played a decisive role in student movement. After completing PhD in physics from Himachal University, He is now working as professor there. He has deep understanding on various educational issues. Besides, this he is resourcefull over issues like Tibet, terrorism in Kashmir and Punjab, moral values & ethics among youth etc. he emerged as an ideologue in the hilly state Himachal by successfully defeating leftist movement through nationalist student movement. Under his guidence HP ABVP has set new standards in working method (Karya paddhati) & developing good workers. As a professor he is active in the field of research too. his research works in the field of physics have been published in 85 international journals. In your early life in ABVP, he had several responsibilities from university level to state level. he was elected as state president of Himachal Pradesh. & was also nominated as National vice president from 2004- 2007. he has been
elected as National President for this session.
Shri Shrihari Borikar is basically from Nagpur (Vidarbha region of Maharashtra) and active since 1990 from his student days. He has been very active in various student agitations while continuing his studies. He did B.Com & D.B.M. from Nagpur. Shrihari has played an important role in vidarbha taking ABVP & student movement at its rise, while he was state jt. organizing secretary of ABVP. To consolidate patriotic feeling among student especially in border and sensitive areas like Jammu & Kashmir (J&K), he spend more then 6 years in J&K as a organizing secretary. He fought for the  employment & educational rights for student against biased attitude of J&K government. He made sure the strong & active participation of students in Amaranth agitation against wrong full decision. Now since last few years he as a National General Secretary & Zonal Organising  Secretary for Whole North-East (NE) working in far flung areas. He has deep study on Bangladeshi infiltration issue. Shrihari visited victim & affected area of Bodo & nearby when they were under violence to help & serve  them. Same time he insured the help for thousand of NE students in different parts of country when threatened by communal forces. For recent historical change in the country, he played the important role in youth and students mobilisation. Now he is reelected for National General Secretary for this session. 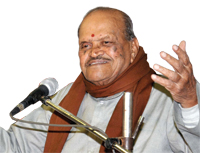