Bengaluru November 16:  RSS has two major works to do, firstly it will run a daily Shakha to create Swayamsevaks with a social vision, secondly through the Shakha it will bring social transformation in the area near by’ said RSS Sarasanghachalak Mohan  Bhagwat in Bengaluru on Sunday evening.

RSS Sarasanghachalak Mohan Bhagwat was addressing a gathering of select swayamsevaks at National Highschool grounds, Basavanagudi Bengaluru. The swayamsevaks (who are working professionals) selected through RSS Shakhas of Bengaluru were only allowed to attend the Bouddhik Varg. Nearly such 7000 employed swayamsevaks attended the event. Following are the excerpts from Mohan Bhagwat’s address:

“There was an expectation that a bhauddik should be organized for Swayamsevaks who are professionals. I would like to narrate an incident of Yadav Rao Joshi when he was visiting Nagpur. When he was asked as to what was the role of a banker in his bank, he stressed that the work of RSS is man-making.

He further elaborated that in Sangh there is a practice of building Swayamsevaks on the basis of their interests and intellect. The program they participate in helps them to grow in the sphere of their interest and it will also help Sangh in turn to get the best out of the Swayamsevaks. The qualities that a SS inculcates in the shaka is to be passed on to his family and the family values have to be instilled in the Swayamsevaks too.

A swayamsevak who is working as a professional is various professions also has duties to perform. He can certainly involve his colleagues in Sangh work by engaging them in a shakha and also introduce them to our work. In turn such professional Swayamsevaks also need to put the best practices they learn in Sangh in their working spheres. For example, Swayamsevaks who were working in RBI branch used to donate a part of their salary for Vanavasi Kalayana Project. You too can contribute similarly.

If a swayamsevak in any profession works diligently, promptly and earnestly he can contribute immensely in the growth of his company/organization. Professional Swayamsevaks can discuss, request people to read sangh literature, etc. I recalled this incident of Yadav Rao Joshi when I was told that this bhauddik for professionals was being organized.

Swayamsevaks of RSS are 24/7 swayamsewaks. Though they attend a shakha just for an hour, they values they inculcate is to be implemented always. One of the continuing task is to familiarize with a new person, build relationship them and involve them in Sangh work. Being a swayamsevak does not end when the nikkar is hung after returning home after Shakha.

People wonder that even small kids are part of Sangh whose member has become a Prime Miister too. The values that the kid inculcates in a shaka is appreciated by all. People see a swayamsevak and gauge them by the way they behave with the others everywhere. Sangh is involved in man-making and through such man-making aims to create a similar atmosphere in the place of residence. Founder of RSS Doctor Ji did not have any riches or huge backing of people. When he started a shaka, people wondered instead of protesting, or addressing people and getting arrested, then how would playing games in a shakha help the nation.

RSS has undergone 5 generations and is in a new era. Today there are young swayamsevaks who have not even seen our previous Sarsanghchalak Sudershan ji.But the task and challenges remain. It is the duty of each swayamsevak to create a favorable atmosphere in their area of residence and thus transform the society. Several years ago, there were hardly few people who believed that Sangh could change the society or bring about a favorable change in politics. People still wondered how could playing games, exercising at a shakha or arranging chairs at events bring about a change in society.But it’s the same Swayamsevaks who have taken up several society-changing projects all over the country. For example, many Swayamsevaks work in seva bastis and bring about a change.

A swayamsevak takes the responsibility of a shakha and builds his shakha but also contributes to turning around the area of his residence towards discipline, truthfulness and being non-corrupt.Whatever may be the age of the swayamsevak, whatever is their medical conditions or preferences to dress, each can contribute in one or the other way to the society. For example anyone can contribute towards Kutumb Prabhodan at a Seva Basati or other forms of trainings to the people here. We need to be aware of what and how we can contribute. We are now entering the next phase of our work.

In the first phase, as Doctor ji envisioned, it was to organize the Hindu society and help it come of the decay it had undergone and defend itself against external threats. This has been happening during the years of our previous sarsanghachalaks.Now in the next phase, we need to take sangh’s work to a larger audience in various sections of the society and take the task of man-making to the last man in the country. This is a challenge we need to take up. This can happen by ourselves inculcating the values from the shakha and then inculcate these values in others in the society. The Swayamsevaks need to take this responsibility and involve everyone in this man-making mission.

There is an interesting story of 3 stone breakers. Once an old man asked them what they were doing. One of them said he is just breaking stones for work, second one said he is getting paid and is not concerned about anything else. The third one said he is building a grand temple. Next day their owner asked them that each should have a goal and take 25 people under them and work towardstheir goals. A Swayamsevaks work is also similar. Not just contributing ourselves but also involve more and more people in our society. This is also Sangh’s work to organize the society and also to make the future path easy for the society to grow further.This event for professionals is also in that direction of involving people from every section of the society.

Sangh’s work has to be taken to each village and residential localities and not miss out on anyone. The expertize required to implement this task is inculcated in a shakha were more experienced SS can train others. This task is not difficult and we can achieve it for sure.Assaid in the Bhagavad Gita,a swayamsevak has to be aware of the 5 aspects while working towards a goal. They are the goal itself, the person who is pursuing that goal, the tasks required to achieve that goal, being aware of other influential factors and the will of the divine. Only such Swayamsevaks who imbibe these values can organize a Hindu society that can work towards paramvaibhavam. This is the need of the hour and I wished to convey the same to you.” 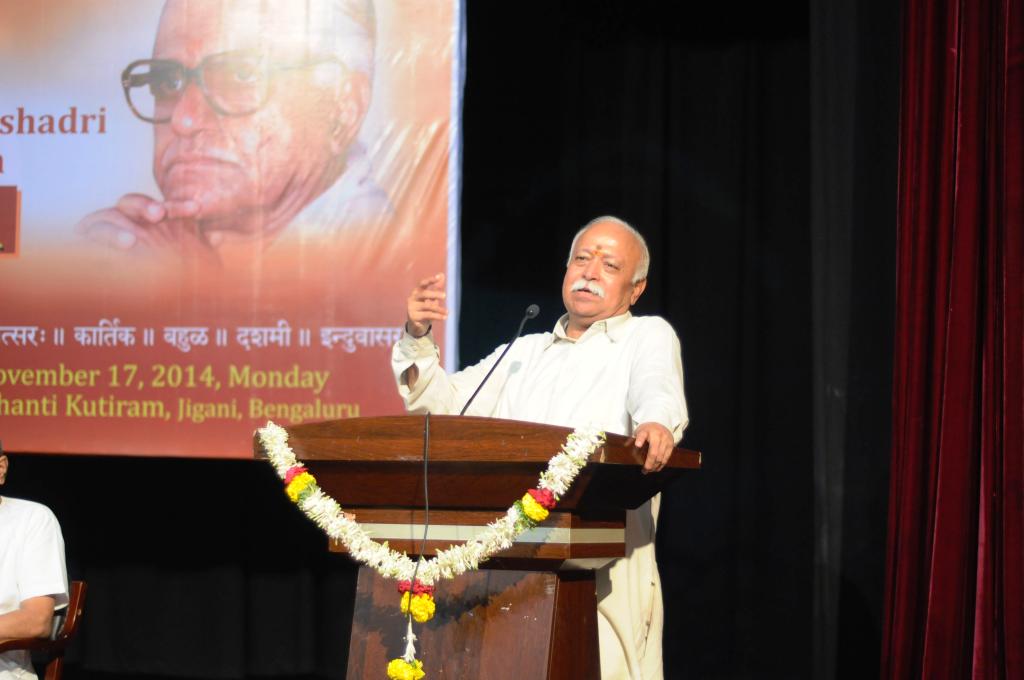