Pune: “Balasaheb Deshpande was a Samaj Shilpi, who not only served the Vanvasis, but also united them with complete honesty and integrity. He brought many nationalist and dedicated Vanvasi leaders like Hipson Roy, Anderson Mawari, NC Zeliang, Workle Dindopugh, etc to the Kalyan Ashram fold,” said RSS Sahsarkaryavah Shri Dattetreya Hosabale, while speaking at a function organised in Pune on January 19 to celebrate birth centenary of Kalyan Ashram founder Balasaheb Deshpande. Shri Dattatreya further said that on the invitation of Deshpandeji, Rani Maa Gaidinlu attended the Kalyan Ashram’s first Akhil Bharatiya Mahila Sammelan in Bhilai as chief guest. She was so much impressed with the Kalyan Ashram’s work that she became a part and parcel of it. She then helped in starting the Kalyan Ashram work in the remote areas of Mizoram, Meghalaya, Manipur, Arunachal Pradesh, Andaman Nicobar islands.

Shri Kripa Prasad Singh called upon the workers to expand the work in all 374 districts of the country. He appealed to the young graduates, post graduates, doctors and engineers to donate time for the cause. He said Kalyan Ashram runs a total of 16,221 projects across the country. He pointed out that the Kalyan Ashram activists planted 14,97,600 saplings from June 15 to September 15, 2013 and the pictures and message of Swami Viveknanda were taken to 42 lakh house.

Another function in Satna

Wed Feb 5 , 2014
Bharuch, Gujarat: The 129th meeting of the Bharatiya Mazd-oor Sangh (BMS) executive was held in Bharuch, Gujarat, from January 4 to 5. The meeting decided to take up some issues prominently in near future. On top of the agenda is social security to all workers, amendment in MGNREGA Law, control on price […] 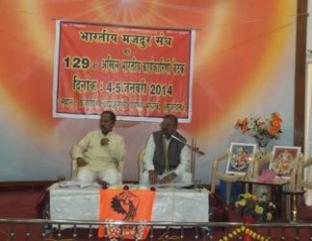