Chennai November 26: Today (26.11.14) morning while Triplicane Bhag Karyavah Rajkumar (local unit Secretary) was going to Office, he was brutally attacked by anti-national elements by iron rods and lethal weapons on a public road.  Luckily Rajkumar entered a house and got escaped. He was immediately taken to a Government Hospital with serious injuries at head and back. What actually happened?
On 23.11.2014, around 7 p.m. near Thiruvateeswararn temple of Triplicane, Muslim youths misbehaved with a family woman on the road.  The Muslim youths ran away after misbehaving. The lady ran behind them and the youth was caught by the police who were patrolling on the road. Immediately, the relatives and friends of Muslim youth numbering 50 came near the police vehicle, slapped the police vehicle with chappals and took the youth away to their home. Following this, the lady also lodged a complaint against the Muslim youth. Hearing this, around 50 Muslims abused and retaliated the Hindu family. On hearing the news, Hindu Munnani intervened and raised their voice for family with the police. When Hindu Munnani intervened, Muslims came to police station and started attacking Hindu Munnani cadres.  Police filed case against 5 Muslims and also 5 Hindu Munnani cadres.

Report by THE HINDU:

The injured has been identified as M.K. Shinoj (29), a resident of Illathuthazhe at Thalassery. Having suffered the stab injuries in his arms and legs, he was admitted to the General Hospital at Thalassery.

The police said that Shinoj, an autorickshaw driver, was attacked at around midnight when he was on his way home. The BJP alleged that the local CPI(M) workers were behind the attack. —Special Correspondent. http://www.thehindu.com/todays-paper/tp-national/tp-kerala/rss-worker-stabbed-at-thalassery/article6632005.ece

Wed Nov 26 , 2014
Seva Barati Purbanchal, Assam has been doing great service in the health sector too. They run annual health checkup camps in remote areas of North-East. This year too they plan to conduct such a program but they are in need of medical kits for the volunteering interns. Each kit of […] 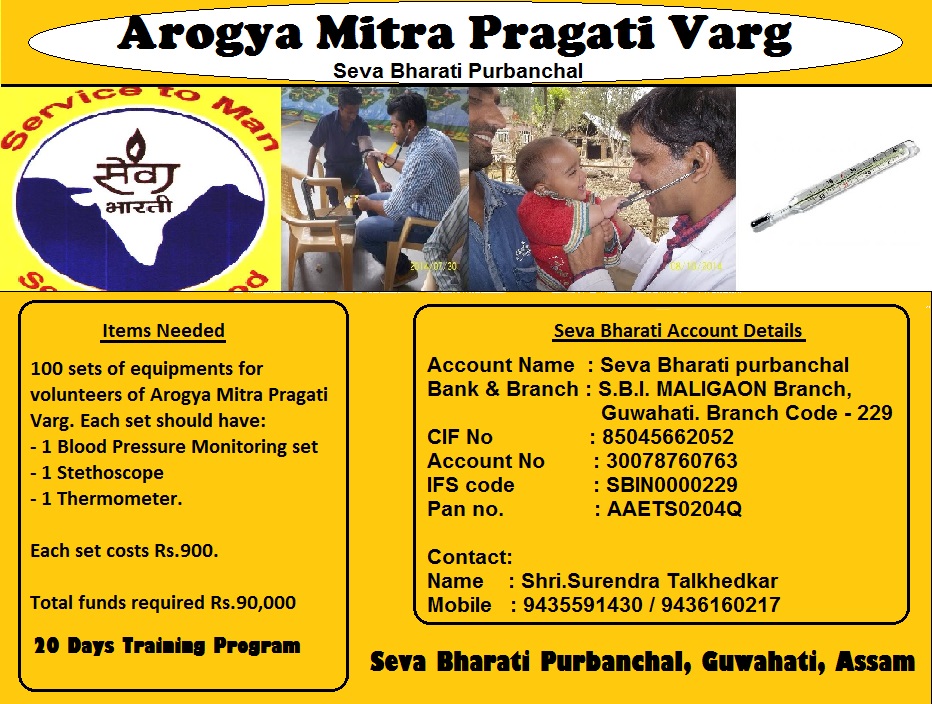