Skip to content
Jabalpur Jan 05: Sarasanghachalak of Rashtriya Swayamsevak Sangha (RSS) Dr. Mohan Rao Bhagwat on Sunday made a candid statement that’ Only and only common man in this country can bring to the nation its pristine glory’.
Bhagwat also said that the RSS has been striving to bring such a change in the society for past 88 years. Dr. Bhagwat was addressing at the concluding ceremony of the ‘Sankalp Mahashivir’ of the Mahakoshal Prant of RSS, in which 33, 260 RSS swayamsevaks had participated for 3 days.

He said, Nations can not be built on behest of one person, or a political party or an organization. The nation needs a motivated, dedicated, organized society for that. The electrifying power of such an organized common man only can bring the desired change in the society. And that is the very reason why RSS has dedicated itself to the cause of organizing the society for last 88 years.
Dr. Bhagwat said that RSS has endured both, praise and brickbats, during all these years in pursuing its cause. He appealed the Swayamsevaks to accept the society as it is, i.e. irrespective of whether they get praise or the brickbat, as without doing so, it would be difficult to bring the desired changes in the society.
Dr. Bhagwat also appealed the people present at the occasion, that they too join the efforts of national revival. He said, only praising the RSS won’t work. Everybody who wants our society to be changes should start working towards the goal. Everybody should work according to individual taste but the efforts should be directed towards the one goal of national revival. Only such an action will see a strong, united nation. He added that the world at this stage needs such a united, strong India to lead it.
Dr. Bhagwat began his address by enumerating the challenges posed before the world. He also shed light on the thought process with which the RSS was formed. He said, patriots like Yogi Aurobindo, Subhash Chandra Bose, V. D. Savarkar were all of the opinion that there are certain ills in our society which need to be done away with. That is why Dr. K. B. Hedgewar started RSS to unite our society.
RSS was started in 1925. The conditions had so deteriorated before that, that people were wary of calling themselves Hindu. The word Hindu had turned into a derogatory word. Today, the condition has improved a lot. A common man can hold his head high and proudly say that he is a Hindu. This is the outcome of the tireless efforts of numerous Swayamsevaks who worked in various fields of life all these years, Dr. Bhagwat said.

Mon Jan 6 , 2014
Addressing the meeting, Vishwa Hindu Parishad leader Gopalji said, “Dharma is the soul of Bharath, Hindus see god in each particle in cosmology, and therefore tree, cow, nature, and stone are worshipped. This is a basic belief of man. We taught about the importance of nature to the world, and […] 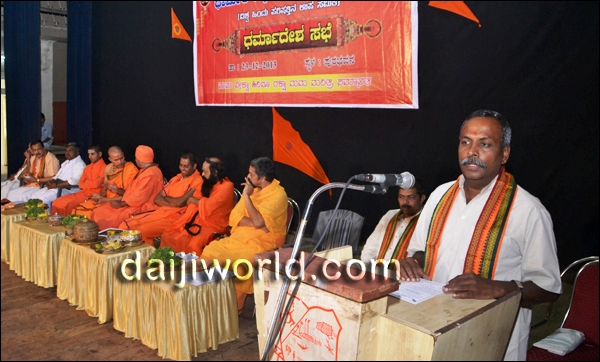