Tulsi Gabbard, the first Hindu member of the United States Congress was there in Bangalore for an interaction with citizens a function jointly organised by City based intellectual forum ‘Manthana’ and Indic research organisation ‘Mythic Society’ Tulsi Gabbard started her much awaited speech with Aloha and Jai Shri Krishna. The excited Bengaluru crowd joined her in Jai Shri Krishna loudly. This was just minutes after she got a royal welcome in a jampacked hall with traditional aarti.

She stressed gracefully on the Hawaiian welcome Aloha and its deep philosophical meaning quite similar to Hindu Namaste.

She narrated why she felt so deeply for the environment as a teenage girl even when surfing kept this beach girl busy. She founded a clean Hawaii Non profit and campaigned throughout the state with her dad to not litter. The crowd attached this with Modi’s swacch Bharat and rejoiced. Then Tulsi dwelled into the dilemma she faced in 2004 when she stared at an easy reelection to Hawaii legislature while 3000 of her fellow home guard people were going to Iraq. She made a tough decision to quit her lucrative political position, and go serve the war against Islamic terrorism. Bengaluru crowd cheered her for her commitment to fight terrorism.

She really went into deep meaning of soul, karma Yoga and the temporary nature of this body, giving a very unique mix of Bhagavad Gita and her daily dose of war victims’ take caring as a conflict zone army medical team. She has really understood Krishna’s philosophy fighting a tough war.

She ended her speech talking about why she chose to become the Congresswoman. This us because Congress (one of the 2 houses of US Parliament) decides on wars. She stressed that leaders with deep understanding of spirituality are very much in need in today’s world.

Sun Dec 21 , 2014
Bengaluru Dec 21: Tulsi Gabbard, First Hindu Congresswoman of USA was in Bengaluru on Sunday, interacted with Bengalurians on Sunday evening. In an event organized by Manthana, an intellectual forum at Mythic Society in Bengaluru, Tusli Gabbard shared her views and experiences being a ‘Hindu’ congresswoman.She said, she is greatly inspired […] 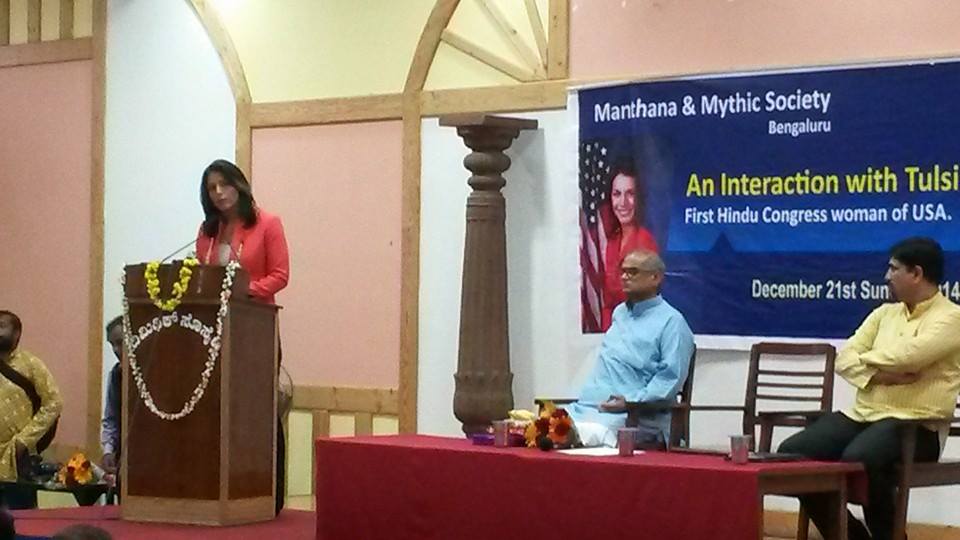