Kochi: ‘Dharma Raksha Samgam’ a unique massive gathering of Hindu organisations was held at Kochi in Kerala last week. The event was organized by Sanghparivar Organisations on the background of efforts of defaming Mata Amritanandamayi.

The reason for this movement, even though to give a strong answer to the Anti-Hindu political and Semitic front, but it was a necessary for the Kerala Hindus and Religious Institutions who were individually made compartmentalized without any reason. Now everybody has been realized the fact that only Sangh has the answer to save all Dharmic Culture of our country. Here it is so evident that for the up-coming election this Hindutwa movement will make a very strong impact on the Kerala Politics which always sidelined all Hindu Organisation.

The Dharma Raksha Samgam created a History after 1982, in that year the first Hindu Samgam has been organized by Sangh Parivar in Kerala, which was a trend setter to the Hindu community of Kerala who were totally confused due to bad effects of Communist politics of more than 30 years. At that time Hindus who were neglecting the traditional rituals and even Ramayana Tradition of common households also came back on the right path.

Dharma Raksha Samgam has been Inaugurated by Swami Viswesara Theertha

Dharma Raksha Samgam has been inaugurated by Swami Viswesara Theertha of Pejavar Mutt and presided by Swami Prakasananda of Sivagiri Mutt. Ashok Singhal, the chief patron of Vishwa Hindu Parishad made the Key note address in the presence of more than 20 Saints, who were religious and Dharmic Heads of Different Ashram and 40 Hindu Community Leaders and RSS Pranth Sanghchalak PEB.Menon and Swami Poornamruthanandapuri of Amritanandamayi Mutt, Swami Chidananda Puri, and Swami Vivikthananda Saraswathi of Chinmaya Mission. The Function started with an introductory speech by K.P.Sasikala, the president of Hindu Ayikyavedi.With Vedic Chanting by the students of Thantra Vidya Peetom. The organisers welcomed all Saints, Religious leaders and other leaders of Hindu organizations and Different Community with all respect. After that Krishnachandran, famous singer done the Prayer by reciting Daiva Dasakam of Sree Narayana Guru (This year is the centenary year of Daiva Dasakam- the bunch of 10 sloka).The general Convener of Dharmaraksha Samgam S.J.R.Kumar welcomed all Saints and E.S.Biju of Hindu AyikyaVedi welcomed all Cast and Community leaders. In between the program RSS Pranth Karyavah P.Gopalankutty master lead to take the Dharma Raksha Pratigya (The Pledge). Kummanam Rajasekharan of Hindu Ayikya Vedi made conclusion of all efforts and said vote of thanks.

Glimpses of all speeches

It is truly a repetition of Ramayana that, how the soldiers of Sri Ram who were gathered in Rameswaram Sea Shore and made arrangements and took the pledge to fight against Ravana. Here in Kerala we are now at a sea shore in Kochi to save AMMA and Hindu Culture. –K.P.Sasikala,the president Hindu Aykiyavedi kerala.

In Kerala we lacked lot of Hindu Culture. We don’t know how to respect our Sadhu-santh dynasty. We were treating them as street dwellers. All politicians are using disciples and followers of dharmic organisations for their purpose. Nobody is responsive, that was happened when Sankaracharya of Kanchi has been arrested. Those same tactics are now using against AMMA using a foreigner and her baseless Book who left the Ashram 20 years back. The so called liberal-social and Neutral Media never ever asked about 3 books which has been written and published in Kerala by Christian Catholic Nuns by revealing the immoral incidents they have faced during the period they served the Christianity. Here in Kerala Anti-Hindu politicians and Government illegally using Hindu Institutions and Temples and also taking away the wealth and also depositing it in Christian Banks like Catholic Syrian banks. Sasikala concludes by giving Message that the incident against Amma should be the last in this series in Kerala.

Viswesara Theertha was so clear in his stand and said those Saints who were assembled here, actually doing the ancient dharma samrakshana of Rishi Valmiki, who saved Sita Matha from the continuous de-moralisation by certain persons in Ayodhya. Here in Kerala Mata Amritanandamayi is now in the position of Sita Matha. Even she is doing lot of sacrifice to the society, helping everybody, running so much service institutions she is also under the wicked eye. He also said that Bhkathi is the only thing which unites all human beings apart from wealth, cast and creed. I came from that place of Madhwa Charya who has born in Uduppi and who taught us what is real Bhakthi.We should also realise that in every time since ancient period India witnessed humiliation of Santh and religious Saints who were so dedicated to society.

By paying homage to Veer Bhgath Sigh’s Martyr day in the history of Indian Independence movement  Ashok Singhal ,the chief patron of Vishwa Hindu Parishad put light on one incident on 2004,that one Greek lady who once a devotee of Satya Sai baba and also a good friend of Sonia Gandhi. Ashokji said that that lady said about the attitude of Sonia about Indian culture is so wrong that she want to prevent all fame which is getting to Satya Sai baba and other Saffron woring saints in India. She wants to de-moralise our saints and exactly that was happened in the life of Kanchi Sankaracharya. Here it is the question that who is going to react? We should have a firm belief that our Saints and Santh parampara is so pure as Ganga. Ganga still flowing even though, 11 crores of Hindu pilgrims used it on Maha Kumbhamela. We have to realize the present threat present threat on AMMA. Here in our country lot of atrocities are going on against Saints. Even after 6000 page reports are not saying a single word against Pragya Bharathi she is still in custody and also treated very body and now she is so weak in her health. The answer is simple to all these.

Unite all Hindu organisations in one platform of Hindutwa. Make strong our heart toward each other. Make our society more vibrant and vigil than ever. All these atrocities are not only to tarnish AMMA but against 100 crores of hindu, he added.

It is the clear plan of Jamet –e- Islami and CPI (M), said Swami ChidanandaPuri.

All plans are not a hidden agenda and it is so evident that the Islamic terrorist backing Jamaeth-e-Islam based Media-One channel and their News Paper Madhyamam and Communist party backing TV channel Kairali. We should realize the clear political motif which running Kerala. On this election we should have to support those who will strengthen Hindu Tradition, nothing more than that. We want all type of security to save our Saints and society. We need that surety from politicians. Now Hindus in Kerala is watching like a Compos. Because we all know Northern Kerala is deciding Kerala politics that is only because Islamic politics are now deciding who should govern the Ministry. We all know this situation. So do the Wright for Dharma he strongly added.

I am so proud that I am Hindu – Vellappally Natesan

SNDP Yogam General Secretary Vellappally Natesan has said that it is due to the reluctance to declare oneself as Hindu; attacks are being carried out against Hindu saints and mutts. Natesan (The most powerful cast leader from Ezhava community in which Sri Narayana Guru took birth) was speaking at the Dharmaraksha Samgamam organised by Dharma Rakshavedi on Sunday. Vellappally said that there have been attempts from various corners against the Amritanandamayi Math to tarnish its image so as to destroy the religion as a whole.

“It is high time that the Hindus stood united. Unity from Nayadi to Namboothiri (two divisions in Casts of Kerala Hindu) should be our motive.” The Yogam won’t be going back from the agenda, even if “many from Changanassery (The NSS Cast Leadership centre-always reluctant to go with Hindutwa movement) abandon the move”, he said taking a dig at the NSS.

In Kerala it is the condition that every politician are like a doll in the hands of Christian Bishops and Islamic Maulavis.He also criticised Idukki Bishop regarding his remarks against Minister Adoor Prakash and for insulting UDF candidate Dean Kuriakose in Idukki.

“People respect the laity just because they are dressed in holy attire. When VT Balrama a Hindu MLA criticised Amma on face- book no one replied. But when he crticised Idukki Christian Bishop everyone in Kerala protested against his remarks and Balram was forced to apologies. It is surprising to note that a community having just 36 percent members in the Idukki constituency is claiming to be the deciding factor in the election,” Natesan said. Natesan also lauded the stance taken by Opposition Leader V S Achuthanandan (CPM opposition leader) made right comments on Amma issue. 'Governments failed to implement Democracy in an Ideal Way': Ram Madhav at Kozhikode

Thu Mar 27 , 2014
Kozhikode(Kerala): To implement the democracy in an ideal way, our governments were failed utterly, said by RSS Akhil Bharatheeya Saha Sampark Pramukh Ram Madhav. He was talking in a seminar on a subject ‘The Democracy, Development and National organized by Bharatheeya Vichara Kendram. It cannot be expected that all problems can be […] 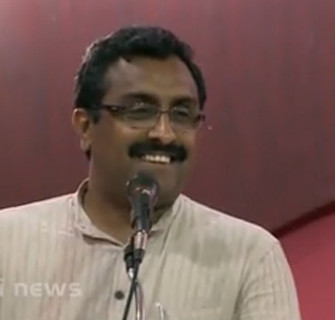