RSS Sarasanghachalak Mohan Bhagwat delivered key note address. ‘Bharat is the source of universal spiritual unity. I request all Swamijis here to analyse and discuss the values of spirituality to be filled in life of each citizen of Bharat. We need to discuss are the programs to be organised and steps to be taken to implement these values by which the one is misguided (Pathabhrasht) should be corrected and guided properly.This task has be done only through Swamiji’s efforts. RSS-VHP will be there in the supporting background with our social activities. If Sant-Swamijis are leading the society, we will be there following the religious leadership’ said Mohan Bhagwat.

‘We are the believers of Vasudhaiva Kutumbakam concept. For an Hindu no one is Paraaya (outsider) in Hindu society. Each religious sector of India should make this concept clear amongst themselves. They should educate everyone in their community about this wide concept. From the minds of the people, the narrow thoughts of casteism should be eradicated. We need show a mirror which images the unity to each Hindu. Such a task can be effectively taken by Sant- Swamiji’s of the Hindu Society’ said RSS Sarasanghachalak Mohan Bhagwat.

Sri Sri Ravishankar Guruji of Art of living expressed his concerns on growing religious conversions across jails in India. Sri Sri opinioned that there should be effective measures should be adopted to stop conversion He also told that ‘population in India is not a curse but a boon. The society should seriously come forward to eradicate social evils like blind believes, casteism”.

The tw0-day Sant Sammelan will conclude tomorrow on Wednesday Nov-12, in which VHP Veteran Ashok Singhal will address the valedictory. 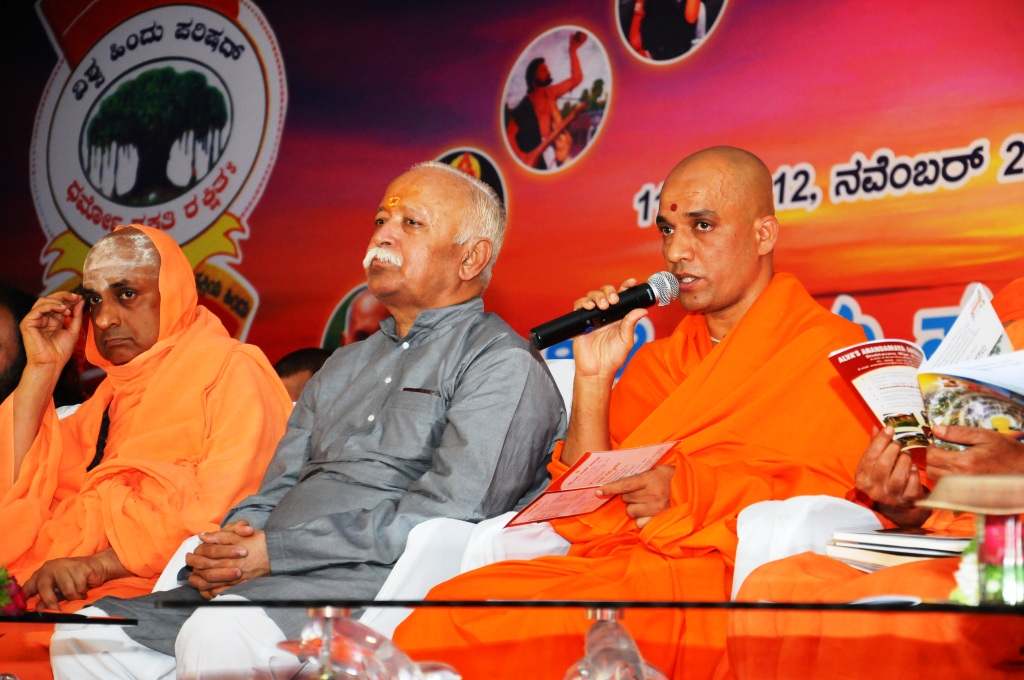