Mangalore – Udupi Jul 22: Thousands of students from colleges across the coastal cities on Tuesday July 22 gathered in front the deputy commissioner’s office here and staged a protest against the recent crimes against women and children in the state and lambasted the government for not taking adequate action against the culprits. The protest led by ABVP after a protest rally from Dr Ambedkar circle to DC’s office.

During the ABVP protest, Ashwini of University College said, “Rape cases are repeating and every day women are facing sexual assaults. There is no adequate protection for women. When the issue of sexual crimes was discussed in the Assembly, the chief minister was caught sleeping. Even the women and child welfare committee is silent. ABVP demands stringent punishment for culprits. Till the victims get justice our struggle will not end.”

Ramesh, state secretary of ABVP said, “From the past several years rapes have been increasing in state. There is no protection for women and students. The state government is providing bad administration. After the Bangalore rape case, ABVP protested but the government tried to curb our protest with lathi charge. But we will not stop our agitation till we get justice.

“Even the district has witnessed many rape cases. The government should frame appropriate laws and stringently punish the culprits. Instead, it is playing political drama. ABVP condemns this. Though we have conducted many workshops and seminars to show direction to the government, our suggestions have not been implemented. Instead they are using lathi charge against us,” he lamented.

Shivakumar said, “Parents fear to send their children to schools and colleges. From past two years 12,000 rapes cases have been reported. The government should feel ashamed about this. Though rape cases are repeating, the government has failed to take a firm stand. The government should at least wake up now.” Shyam Bhat, Akshata, Rakshita, Yathish, Anushka and others also spoke on similar lines.

Around 3,000 students took part in the protest. The ABVP submitted a memorandum to the DC on the occasion. Udupi, Jul 22: Frustrated by the increasing number of rapes in the state, thousands of students staged a protest in the city on Tuesday July 22 near the clock tower here.

Nagaveni, a student said, “We do not enjoy freedom and equality in this male-dominated country. The corrupt government has surrendered to the rich people and the politicians are their puppets. Any official work can be done only by bribing them.”

“Police department should punish the culprits without delay. Government should wake up and the court should provide justice to the victim’s family,” said Shivanand Nayak, an ABVP member.

Students were unanimous in their demand for justice. They also said that they had waited enough for the police to act.

The students also demanded ban on drugs in colleges and called for a separate law to punish the culprits.

The students shouted slogans demanding a complete stop to cases of harassment and also urged the government to provided adequate security to women.

Abhishek, a student, said that night clubs should be shut down. 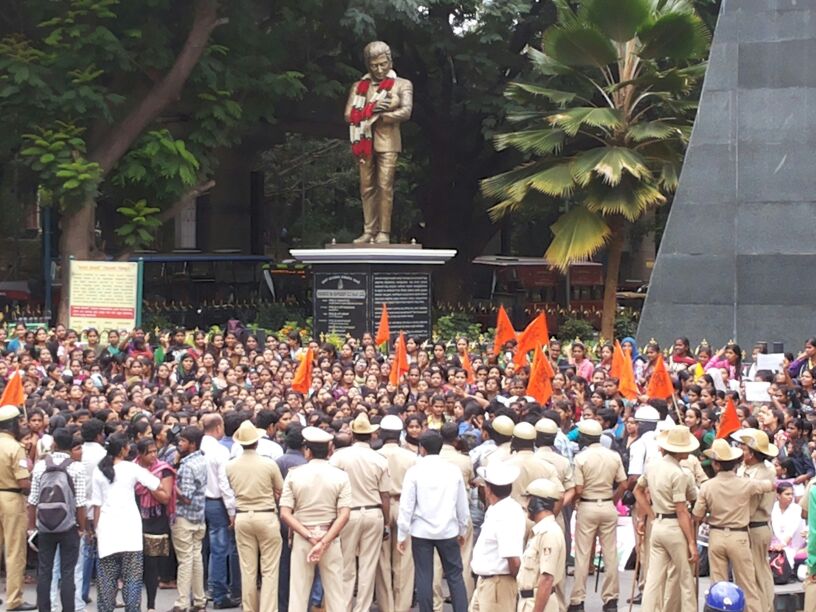