More than 2036 Svayamsevaks took part in the attractive pathasanchalan held.

Bagalkote Karnataka October 6:: Even after then Home Minister had clarified that RSS had no role in Gandhiji’s murder, chief minister Siddaramaiah is hiding the fact, and time has come to make him understand the truth, said Santosh BJP’s National Joint General Secretary-Organization.

While addressing a huge gathering at a public function at Basaveshvara College ground organised on the occasion of annual Vijayadashami celebrations of RSS he told, the attitude of Chief Minister who didn’t open his lips on antinational remarks of the likes of Akbaruddin Owaisi and criticizing patriots like Sulibele Chakravarthy is not appreciable. Society itself should take the task of making him understand the truth. The Britishers went on destroying the culture. Alexander wanted to conquer the world but he could not conquer Bharata. Even though, RSS founder Dr Hedgevar understood that Indians were sleeping, by initiating RSS he started the work of Nation building and asserting Hindutva. Those Svayamsevaks who understood that country will not develop just by heritage and king’s courts, but it will progress by organized efforts of society and made sacrifices for country ignoring their own suffering built the brigade of Svayamsevaks. That’s why in difficult time of the Nation two Khakis are remembered one the soldiers and the others the RSS Svayamsevaks- he stated.

Telling that, to oppose Britishers or Pakisthanis no need to shout the slogan Bharat Mata Ki Jai, but we always need a mindset of worshipping Bharatmata, he said, opposing  the conspiracy to keep the Adivasis outside the mainstream of society, the RSS is working towards bringing tribal people of 40 thousand villages to mainstream and instilling patriotic spirit in them. This is a silent, noiseless good work and it is the motto of RSS. Mon Oct 6 , 2014
SevaSanghik-  An initiation of RSS swyamsevaks of Manjeshwara: Manjeshwar October 06: On Sunday, October 05th, Main road connecting Kerala and Karnataka was repaired as a part of Seva Sanghik  organized by local unit of RSS at Manjeshwar . A total length of 13 KM of road was repaired by  Swayamsevaks of […] 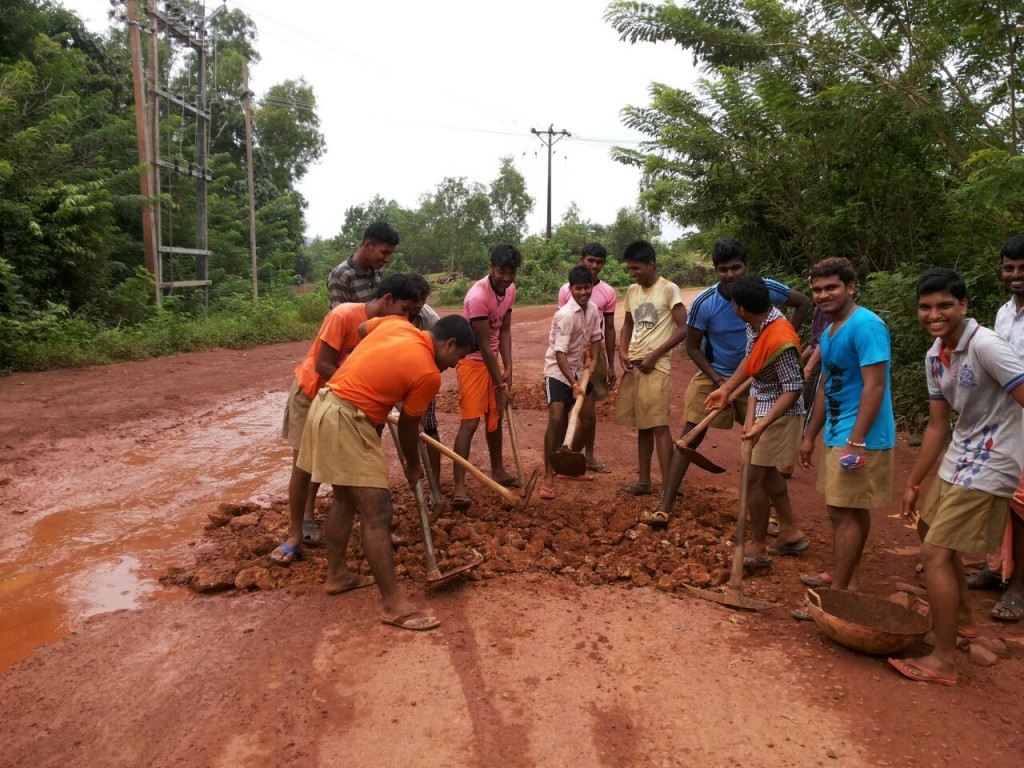