Bengaluru 7th March, 2014: Akhil Bharateeya Pratinidhi Sabha (ABPS) was inauguarated today in Bengaluru at the Rashtrotthana Vidyakendra, Thanisandra by Sarsanghachalak Mohan Bhagwat Ji by lighting the lamp. The ABPS will be held for the next 3 days I.e from 7-9th March. Below is a short report presented at the ABPS.

The ABPS paid homage to those who departed in the last year. Those who were paid homage were Sri Vilasji Phadnavis, former Paschima Kshetra Karyavah, whose very life was dedicated to the Sangh work and its philosophy, has left us forever, battling against agonizing physical ailments. Sri. Rajaramji, who was engaged in the mission of protecting cows in the Punjab, fell a victim to cardiac arrest and departed quite unexpectedly. Sri. Dinanthji Mishra, ex M.P. and journalist, who had acquired fame for his clarity of thoughts, has also left us.

Mananiya Shivakumarji Bharatiya, Saha-Vibhag Sanghachalak of Champaran, Sah Vibhag Sanghchalak of Sawai Madhopur Dr. Haricharanji Sharma, Sri Arunda Chakravarthi, Mananiya Sanghachalak of Howrah South Bhagh, Sri Gujransingh Thakur, Senior Pracharak of the Kashi Pranth,Man. Sanghchalak of Amrutsar district Sri Santok Sinhji, Sri. R.N. Venkitaraman, a Vanaprasthi, who was active as the Karyalaya Pramukh at the Chennai Karyalaya, who was also karyalaya pramukh of Vivekanand Sheela Smarak Samiti in its initial phase, and Sri Maneklalji Patel, former Mananiya bhag Sanghachalak of Karnavati Mahanagar, are also not with us now. Sri. Aravind Harshe of Pune, Sri. P.T. Rao of Kerala, who was looking after the work of the Bharatiya Mazdoor Sangh as a Vanasprasthi, Sri.K.S. Murthi of Hyderabad, who was the Vanavasi Avaas Pramukh of Andhra Pradesh and Sri. Prabhakarji of Hyderabad, who was the Kshethra Karyadarshi of the Bharat Vikas Parishad, are also no longer with us.

Sri. Namdeoji Dhasal, the celebrated author of Maharashtra and Sri Rajendraji Yadav from Delhi who have expressed the pains of the society, especially of the deprived sections. Sri.Deepchandji Gardi, an industrialist and philanthropist of Mumbai, His Highness Srikantadatta Narasimharaja Wadiyarji, the Maharaja of Mysore, who had made grate contributions to promoting the work of Viswa Hindu Parishad and Hindu thought, and His Highness Uthradom Thirunal Marthanda Varmaji, the Maharaja of Travancore, a Sanskrit scholar from Mysore, Maha Mahopadhyay Sri Ranganathji Sharma, President of Hindu Mahasabha Sri Vikramji Sawarkar and Famous Kannada Poet from Bangalore ‘Rashtra Kavi’ Dr. G. S. Shivarudrappaji have also departed.

Sri. Eswardasji Rohani, the Speaker of the Madhya Pradesh Assembly, Sri. Muralilalji, the Member of Parliament from Chattisgarh, Sri. Sheeshramji Ola of Rajasthan, a former Union Minister, Sri Bangaru Lakshman Ex. M.P. and Ex. National President of BJP are also no more. Padmashree recipients Dr.Vikramji Marvaha of Nagpur and Sri Vijayadanji Detha (Bijji), a famous writer of Rajastan, film artistes Srimathi Suchitra Sen and A. Nageswara Rao, Nelson Mandela of South Africa, Syedna Mohammed Burhanuddin, the spiritual head of the Dawoodi Bohrah Community, also have left us. Their memory will ever linger in our minds for the contributions made by them. Pujya Kripaluji Maharaj, who had displayed tremendous capacity in guiding the lives and thought of others through his

spiritual insight and sweet discourses, has attained Mukthi. Many devotees and pilgrims, who had reached Uttarakhand from different states of our country, became victims of an unprecedented natural calamity, so that they could never go back to their near and dear and all of them have attained to their final adobe.

According to the available statistics, all over the country, 44982 Sakhas are being conducted at 29624 places. Saptahik Milans (weekly congregation) are being held at 10146 places, whereas work is being carried out in the form of Sangh Mandalis (monthly congregation) at 7387 places.

“Akhil Bharateeya Pratinidhi Sabha (ABPS) of RSS starts today in Bengaluru. Sarsanghachalak Ji inaugurated the ABPS by lighting the lamp. The APBS has been organized thrice earlier in Bengaluru and twice at other places in Karnataka, at Puttur and Mangalore. Around 1385 delegates from all over the country are expected in this annual meeting of the Sangh. The ABPS reviews the past one year of Sangh’s growth, its various activities, its impact on national life and considering the present national scenarios decides on the direction of Sangh work for the next one year. The ABPS will also plan for the training activities of the Sangh Swayamsevaks and related activities. The ABPS will also deliberate on Sangh’s work in other areas other than Shakha work like seva, samarasata (social harmony), and others where sangh works in co-operation with the common populace of the country.

In the last 3 years of continuous work, Sangh shakhas have increased by 2000-2500 shakhas. The expansion of Sangh work has been planned in 3 phases; First phase till 2015, second till 2018 and third till 2025. Giving the trend, by 2015 we feel that we will grow by 10-12% in all our work areas. There has been an increase in the participation of youth in Sangh activities in all spheres of Sangh work, especially in Seva related activities. Since January 2013 to this January of 2014, Swami Vivekananada 150th year celebrations (SV 150) was organized all over the country. This was held under the aegis of Vivekananda Kendra of Kanyakumari and Sangh and its swayamsevaks gave full co-operation in organizing these events all over the country. Swami Vivekananda’s relevance and message was conveyed through ‘SV 150’ celebrations that happened all over the country and the youth have been very much inspired and this was evident by the response the SV150 celebrations received from the people esp. youth of the country.

In one such activity, about 15000 college students in Nagpur vowed to take up some social activity in their college life and after, like rural development, social upliftment Sangh has also grown in Samarasata (social harmony) related activities during this year.

In an other major activity as part of SV150, a conference of Vice Chancellors of universities was held in November last year. More than 105 Vice Chancellor’s and those equivalent to them participated in the conference. Due to the impact of the SV150 celebrations, they planned to introduce Swami Vivekananda’s message in their syllabus, through which they wished to give their students a kind of social internship which will give them a social orientation. The response for this initiative has been great.

There has been wave of transformation in the country. When a major event of our democracy is about to happen, everyone should be active in this process. Sangh Swayamsevaks are active in this sphere also which will strengthen our democracy. Sangh is also observing Nagaland’s queen Gaidinliu’s centenary this year. She had fought against the British rule at a very young age of 16 and was jailed by the British. After he release she had also worked against conversions of the local populace. A statement in this regard and other topics will be released.”

Following is an extract of Saha Sarkaryavaha’s Q&A session with the media.

Question: What is the role of Sangh in the transformation wave in the country you mentioned? What is Sangh’s view of Modi?

Answer: Sangh view is that youth should get good opportunities. In view of the SV150 centerary, our wish is also that the youth inspired by the ideals of Swami Vivekananda will help in this effort. There have been non-governmental effort towards this and this is our strength. Sangh only wishes that any government should provide good governance and administration. Regarding Modi, we are of the view that he is Sangh’s swayamsevak and is ofcourse a very capable person who has proved himself in Gujarat.

Q: With AAP gaining ground, how does Sangh view AAP?

A: In a democracy, many parties are formed. Some stay and some go. But we need to review their performance, their experience and we saw what AAP did in Delhi in the 49 days they ruled. Hence, be it AAP or any other party, their performance should be evaluated by the people and media is also a witness to it. We hope the people will take judicious decisions on who can govern better based on their wisdom and the party’s performance.

Q: What will be the Agenda of this ABPS?

A: As mentioned at the beginning of the press conference, the agenda of ABPS will be to plan for the further work of Sangh and review the work of the last one year. Issues related to poverty, national security related issues, economic policies, price rise, developmental model, etc will be discussed.

To another related question he answered, “There are many issues like minorityism, Communal Violence Bill, Ram Janma Bhoomi, terrorism and formulation of Equal Opportunity commission which provides deceptive equality, etc. which we feel are detrimental to the nation will be presented before the society but not necessarily discussed as part of every ABPS”

A: Sangh has never called for retirement of anyone. New faces and the new generation should be given opportunities not just in politics but in all walks of life is the view of Sangh.

Q:  Is work of Sangh in NE based on its current political compulsions as BJP is currently weak there?

A: Sangh has been working in the North-East since the last 5 decades. Lot of seva activities by Swayamsevaks have been undertaken in the NE. For example, ‘Arogya Mitra’ is a Sangh project that has been ongoing to provide quality healthcare to the people there. We run several hundred schools and these are not undertaken due to political compulsions but for service. There has been a psychological gap between mainland and the North-East, which has to be removed. Sangh is working towards this for long and hence our work there is no political agenda. It is purely for the cultural unification and unity of the nation. Our work is for the development of the NE regions which are long overdue.

Q: Has RSS given its nod to Modi centric campaign by the BJP? Has Sangh moved away from its principles by backing such personality based campaign?

A: The selection of candidates is the party’s prerogative. Sangh only conveys its concerns in the nation to the society based on which the party can choose to prepare its manifesto.

Sangh does not give directions to BJP in selecting candidates. Sangh only expects higher voter turnout which will help in the democratic process, keeping the country’s interest at the highest. 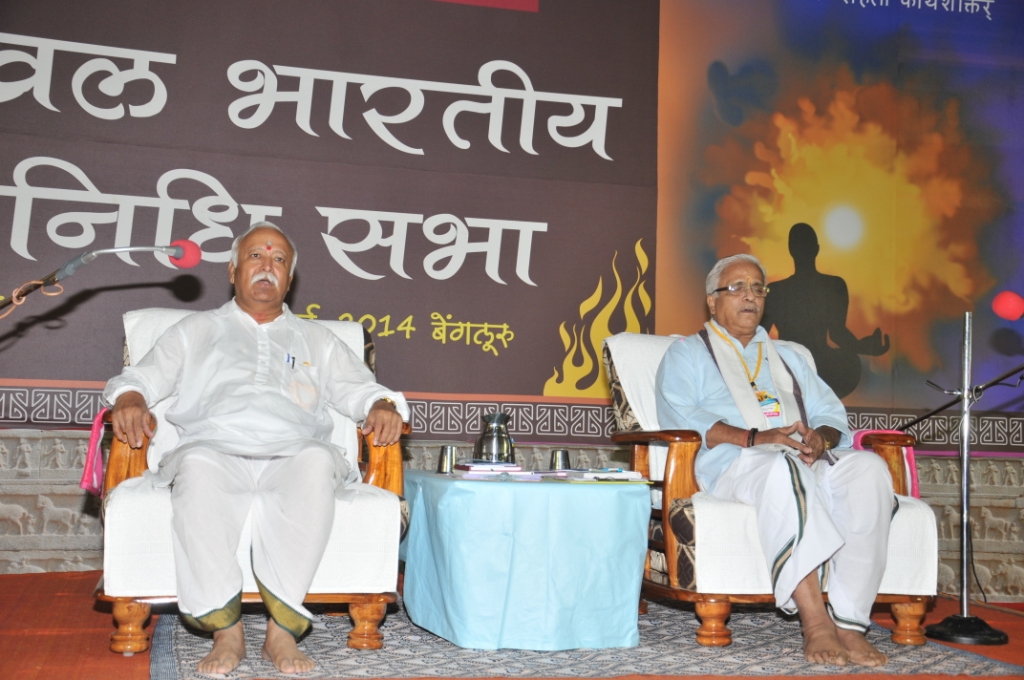