Following is an extract of his address to the media:

“I would like to thank the media for covering the events at the ABPS during the last 3 days and taking the message to the people. We meet at the ABPS to review and deliberate on Sangh’s activities over the last one year. Many senior functionaries are also at this meet.

Go Raksha and Go Seva are two other prominent issues which Sangh feels are a necessity ofr our nation. Sangh would like to take the message of importance of Go Raksha and Go Seva to the people of this country as the economic and cultural ethos of our nation are tightly coupled with it. Many organizations, including Sangh’s sister organizations, are working towards the cause and we hope that we will be successful in our endeavor. They have been successful in establishing more than a 1000 Go Shalas.

Gram Vikas is another sphere were Sangh has been working continuously. Villages are our backbone. But after 1947 people in our Villages have been kept away from basic developments that are most required, if not all which is available for our cities. Though we expect the governments to do more towards our villages, Sangh is also working towards it. Sangh is working in more than 200 villages which are becoming energy centers of our country.

It is true that a family is a basic unit in our society and Sangh also believes in it. But due to several reasons which are economical and cultural, there has been a threat to this structure. To keep the Family system intact, Sangh has taken up several initiatives like ‘Kutumb Prabodhan‘, which aims to re-introduce the values and importance of a Family in our people.

There has been an increase in the number of shakhas in the country. A detailed report regarding this and other Sangh activities has already been provided to you. Sangh shakahas run is about 55,000 villages in the country today. But Sangh’s work, through various other activities including service, has reached more than one lakh villages.

We have been successful in most of our endeavors and we wish to keep going in the right direction. Though it is difficult to achieve all our goals within a time frame, as this needs a change in the psychology of our people and the work involves common people from our society, we will keep striving for success in our work.” Following is an extract of his Q&A session with the media:

Q: Has there been a discussion on Homosexuality and the laws regarding the same? What is Sangh’s view on this?

A: Though we have not discussed on this topic, we are of the view that anything which is detrimental to the health of the society should be detested.

Q: Will Sangh interfere in BJP’s selection process when they are unable to reach a conclusion?

A: Sangh will not interfere in the internal affairs of the party as we feel that the leaders of that party are capable enough of dealing with such situations.

Q: Dalai Lama has supported live-in relationships. But he has also supported Sangh earlier. Now, how does Sangh view his statement?

A: It is his personal view and he is entitled to it. But we will try to engage him on this convey our viewpoint on it.

Q: Where there any resolutions in this ABKM?

A: No resolutions but have taken in this ABKM but we have released two press releases. One regarding, the sinister ploy to discredit Amma which we feel is a planned effort by several people and organizations and we condemn it. The second is regarding the centenary celebrations of Nagaland Rani Gaidinliu, who fought against the British and was also awarded the Padma Shree. We have invited everyone to involve in these celebrations.

Q: Sangh had earlier called for retirement of old politicians. What is its view on several old politicians who are still active and want to contest elections even now?

A: Sangh does not give directions but is of the view that new generation should get an opportunity. It is also true that we require the guidance and experience of the older generation. Keeping this in mind we need to make the right choices.

Q: What is the view of Sangh on Corruption and Anti-Corruption movements?

Q: With the emergence of AAP on the political scene, how does Sangh view AAP?

A: We too see AAP as you in the media do. New parties are formed in a democracy and time will decide who is right and who is not. Their performance has been visible. But if they are indeed capable of fighting corruption Sangh will surely support them too.

Q: What is Sangh’s view of Rahul Gandhi call to regard Jains as a minority community? Also how do you view his accusation that RSS members killed Gandhi?

A: Sangh has already said it does not support any move to divide the society as majority and minority. Jains are a part and parcel of the Hindu ethos, history and culture. Few of our traditions and rituals might be different but every culture of this land are Hindu.

Regarding Rahul Gandhi’s statement at a rally, we have complained to the Election commission and hope that they will take appropriate action.

Dr.Manmohan Vaidya, Akhil Bharatiya Prachar Pramukh was also present on the dais. Radhakrishna Holla of Vishwa Samvad Kendra welcomed the delegates from the press and introduced the speakers. 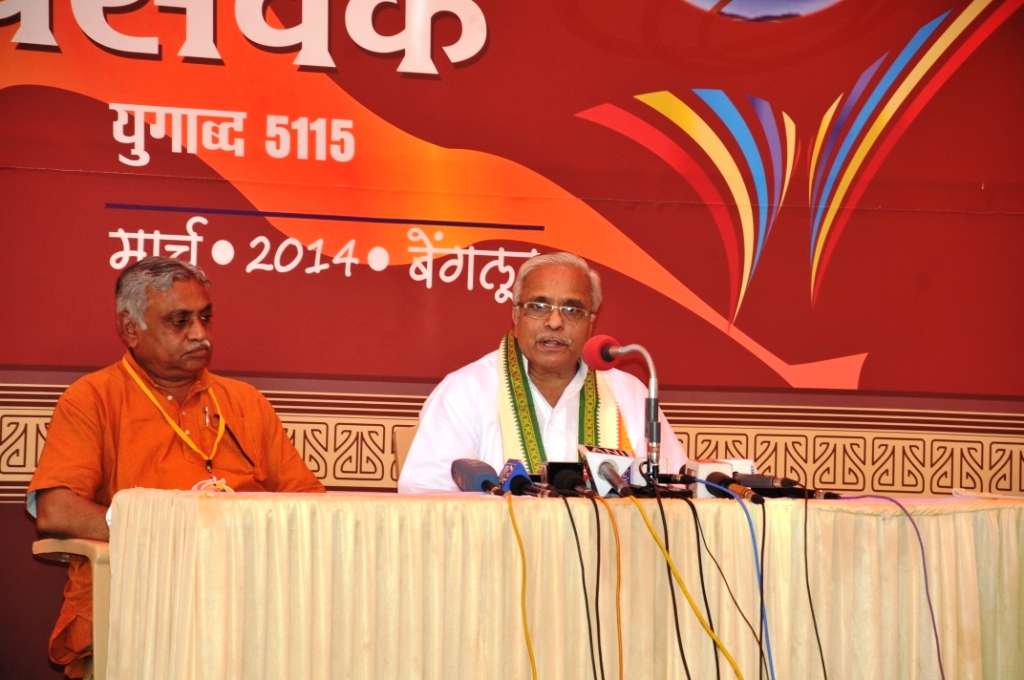