Prof Yellapragada Sudershan Rao, serving as President of Itihas Sankalan Yojana and heads its Andhra Pradesh chapter. (Akhil Bharatiya Itihas Sankalan Yojana started in 1978 is the brainchild of RSS leader Babasaheb Apte and Moropant Pingle. The idea behind the project is to write history from nationalist perspective and popularize Sanskrit. Operating out of RSS Keshav Kunj office in Delhi, ABISY is working on Saraswati project as well as various aspects of ancient and medieval Indian history. Historians from many universities are part of this project.)

He is currently involved in a project that would fix the date of Mahabharata war. At 67, he looks young and agile exuding keen interest in reading and writing. YS Rao Hailing from Kolhapur of Mahabubnagar district, Mr. Rao began his teaching career at Kakatiya University. After retirement, he settled down in Hanamonda. He guided eight PhD and 15 MPhil students besides editing numerous books and contributing to the AP History Congress. He said he would strive to separate the history of Telangana region from the volumes brought out by the AP History Congress on history of Andhra Pradesh. He had earlier served as the member of ICHR and was conversant with the functioning of the council. Rao, who taught at Kakatiya University, Warrangal is an expert on ancient Indian culture and heritage with special reference to the history of Hindu religion, religious and social history of South and South East Asia. Rao is currently involved with Mahabharata Project, sponsored by Sanathana Dharma Charitable Trust, that critically examines the Puranas and Itihasas to trace the history of religion, dharma and culture of South Asia from Vedic times to the beginnings of historical period. Under the Mahabharata project, puranic genealogies are being studied. Rao’s bio-data says, “Considering the Mahabharata War as the sheet anchor for the History of Bharat, an attempt is made in this project to review the original sources- Astronomical, Puranic and Historical – for fixing the Date of the War.”Another research project he is involved is ‘Project India’ sponsored by the Sivanandaguru Educational and Cultural Trust, Warangal and plans to document visual and literary sources on major sites of religious and historical significance as original source material for further research. ·Rao is also working on Tribal Research Project sponsored by Bharatheeya Itihasa Sankalana Samithi, Hyderabad to document the culture and beliefs of Chenchus, Koyas and Gonds. (Inputs from TOI an The Hindu)

Thu Jul 3 , 2014
Chennai July 03: Another massive protest demonstration was organized by Hindu Munnani and parivar organisations on 2nd July, 2014 calling upon the Tamil Nadu Government for speedy action and arrest of the killers of Hindu leaders in the State. Recently, Sri KPS Suresh was suddenly attacked and murdered by unidentified gang causing […] 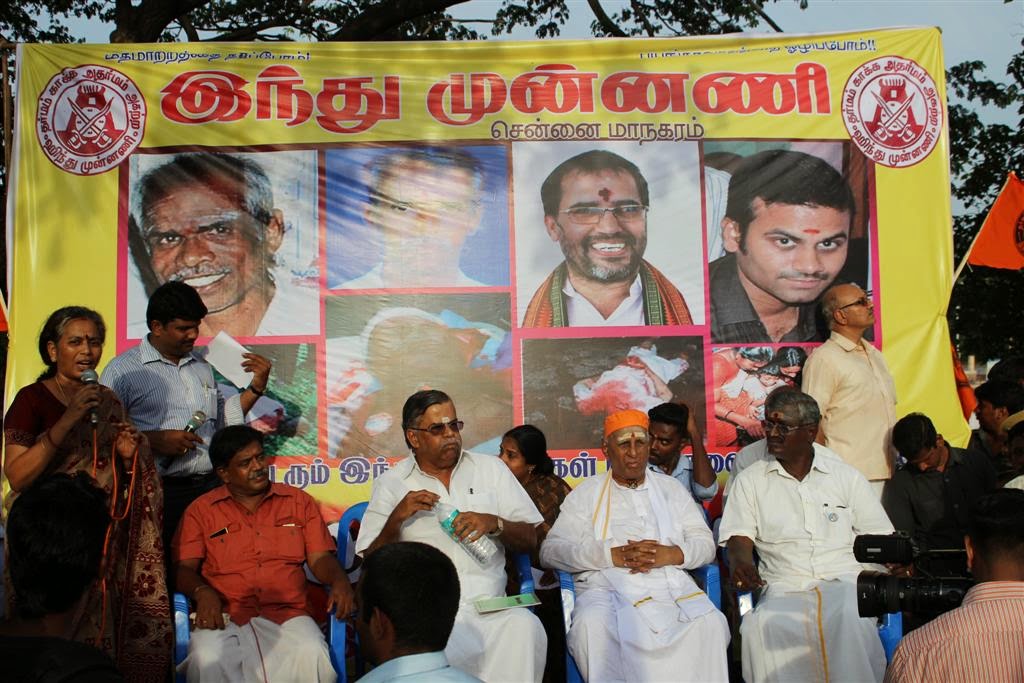