Bengaluru November 01: International Intellectual forum of Bengali Hindus (A worldwide organization for the Justice of Bengali Hindus) organized Sri Sri Kali Puja for 4days from 23rd Oct to 26th October 2014 at SMC Kalyana Mantapa, No 4, 7th Cross 4th Main N. S. Palya, B.T.M 2nd Stage, Bangalore 560 076 to get the blessing, courage, Strength and happiness from the divine God and to bridge the gap between Bengali Hindus and local Hindus of Bangalore by this kind of public festival, so collaboratively Hindu force can work in reconstruction of our nation and to sustain and propagate the Hindutva to the next generation of Hindu society. The puja was organized grand way for 4 days with various program like speeches, discourse along with various food, cultural programs and competition to develop the patriotic essence among our young generation.

On day-1 23rd the puja was inaugurated by the Chief guest Mr. M. Krishnappa honorable MLA of Bangalore South by lighting the lamp. In his Brief speech he has requested to the public to follow the Modi’s path and to join Wholeheartedly “SWACHHA BHARAT” program, he has call the people to clear fireworks leftovers in front of our houses and to keep our country clean.

RSS Pranth Karyavah of Karnataka State, Sri N Thippeswamy in his speech told that Bengal should be a model part of the country. He explained one of his personal experience in his recent visit to Kolkata to the public, he said, recently when he was at Bengal and was travelling in an auto and asked the auto-driver “how is the Govt ?….. the Auto driver replied back “where is the Govt….” . as per him the main Problem in Bengal that there is no Growth in Bengal for last 40 years and it is the challenge for real patriotic educated Bengali Hindus to take it forward. He appreciated very much the initiative taken by International Intellectual forum of Bengali Hindus, and emphasized the need of conducting this kind of program more frequently to bring back the educated and young Bengali on the track of Hindutva.

Bharath which was # for 1000 years and # 2 for 200 plus years why has it come down on financial rating???,Is mere winning a IPL match by a so called team called KKR (which is just a Cricket Match) integrate bengalis for “NATIONAL STREAM”, THE LAND THAT PRODUCED Greats like Swami Vivekananda, Ramakrishna Paramahamsa, Shyama Prasad Mukerjee, Bankim Chandra Chatterjee, is where now ??? Why has this degradation happened ??.How Come Bradhaman Blasts have been taken in such “lighter context”, Why has so many Madrassas mushroomed in Bengal and today U have a situation where almost 30% of population is Muslims??.What are the agendas of Steve Waugh and Company in Bengal or Microsoft’s head Bill Gates so called CSR initiatives in Bengal. Is there a thought of Dis-integartion process of Bharath.

Solutions in Me (SIM), We must integrate…Be part of National Mainstream activities that are on to “PROVOKE” Bharatiya Feelings and work with those forces, RSS,VHP forces should be strengthened and thrust on ideas of “NATION FIRST”. Work closely with Political parties who are setting up for 2016 elections and make sure BHARATH identity based political “thought process” parties are supported.Each of us if we can “JUST” connect to 05 people in a day by mail,sms, campaigns etc… We have already set up the process…

Bengal which is the first originating point for surya deva or Surya Kiran for/to Bharath should be protected ….Yes, we must make Bengal RASHTRA GURU for Bharath to head towards VISHWA GURU….

RSS Pracharak, Sri Suresh of Hindu Seva Prathishtana (HSP) brief…We have to make SANATHANA HINDU DHARMA strong, We have to have such meetings more regular and get to know each other….We have to be be like”one family”.Deepavali is a festival of good over evil…let’s make that happen in our lives as well

In the day -2 main speaker – Shivaruda Swami of Belli Mutt , Bangalore, has been a senior member of Central Marga darshan mandali of VHP and has been Associated with RSS from last four decades.

After speech Khichdi-Bhoga (prasadam) was distributed to the devotee . The turnaround during Baudhik was around 300~350. However, total turnover was more than 1000, and IIFOBH have distributed Bhogh (dinner) for them till mid-night ..

Summary of the speech

It is a great initiative by Bengali Intellectuals to unite all Hindus especially the Hindu Bengalis to re-establish the Hindutva in Bengal.

The recent unrest in west Bengal is happening for a positive change. As partition of east and west Germany did not last for long time and finally two parts of the Germany got united into a strong and developed nation, Similarly, The division of Bengal won’t be long lasting and two parts of Bengal will merge together in near future and an united Bengal will emerge as progressive state in Bharat.

Looking at the Map of our mother land Bharat and visualizing the great idol of Bharat mata, Karnataka seems to be exactly placed at the lap of Ma Bharat. Sitting on the lap of Bharat mata (at Bangalore) our honest efforts and hearty pray to unite the Bengali Hindus to save the land of Bengal would really be blessed by Ma kali and would be Successful. From today Bangalore will be BENGALURU, Hubli will be Hubballi, 12 Cities of Karnataka renamed

Sat Nov 1 , 2014
November 01 BENGALURU: Yes, what you just read is the new name of Karnataka’s capital. From today, Bangalore and 11 other cities have new nomenclature. The state government issued a notification to the effect on Friday evening. The renaming coincides with the Kannada Rajyotsava celebrations. Bangalore is the latest city […] 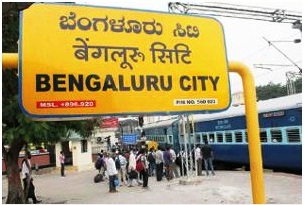