Thiruvilwamala Kerala December 02: RSS Swayamsevaks helped the devotees during the annual Noozhal (Malayalam word means crawling in a narrow space) or the popular Tunnel Crawling Festival at the Punarjani Guha, a natural tunnel in a rocky cliff in Thrissur district of Kerala. RSS inspired forum ‘Seva Bharati’ offered food, water and timely shelter for the devotees.

Punarjani Guha is a natural tunnel 150 meters long in a rocky cliff in Thrissur district of Kerala. Punarjani Guha is situated 2 kilometres from the Thiruvilwamala Temple where the chief presiding deity is Sri Rama. The “noozhal” or Tunnel crawling is a challenging task and not all can perform this ritual. Most people need about half an hour to finish the ritual.

The movement through the cave demands all kinds of bodily postures like standing, sitting, creeping, crawling etc, yet every year thousands of men flock to this place on Ekadasi day to avail themselves of a chance to escape the cycle of rebirth. Attended by vegetable vendors, here is an exemplary RSS Shakha at Anandapalli in Telangana

Wed Dec 3 , 2014
New Delhi December 02:  May be the drenching rain or cold waved winter or the hot summer season, here is an example how much committed the RSS Swayamsevaks are, who attend a daily shakha at an very odd time, when all other sections of society are at their heaviest sleepy […] 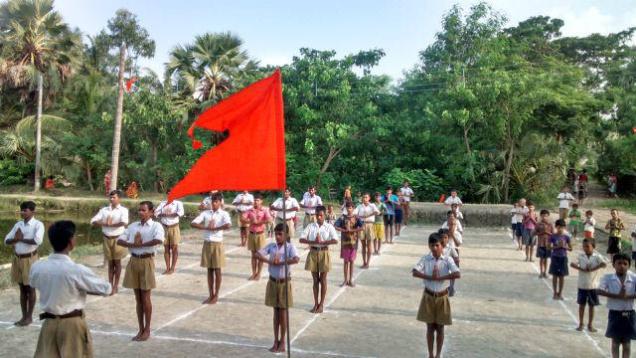