During his speech RSS Sarasanghachalak Mohan Bhagwat stressed on the need of spreading the  ‘values of religion’.

Noted Spiritual leader and Ayurvedic physician from Karla, Balaji Tambe, who attended the function along with Bhagwat. “A Hindu is the one who does something passionately, without seeking anything for self. That becomes his puja.” said Balaji Tambe.

Vasudevanand Saraswati Maharaj expired on Tuesday, Nakshatra Ardra, Ashadh Shuddha Pratipada in 1914. This year it is the 100th death anniversary. His body was immersed into the Narmada River. His samadhi(tomb) has been built on the river bank at Garudeshwar, Gujarat. There is a famous Datta Mandir in the same place.

RSS chief Mohan Bhagwat is on a four-day-visit to Gujarat from June 27 to June 30.

On Sunday June 29, Mohan Bhagwat will inaugurate a Madhav Vidyapeeth — a school by the RSS education wing Vidyabharati for the tribals in Kakadkui village in Bharuch. On Monday, Mohan Bhagwat will proceed to Mehsana where he will interact with RSS Swayamsevaks.

His parents were devotees of Lord Dattatreya, his father Shri Ganesh Bhatt Tembe spending years together in the remote Ganagapur temple of the Lord in Karnataka. His mother Ramabai also spent her time in religious pursuits like japa (recitation of mantras), pradakshina, path, atithisatkar (hospitality) etc. After a particularly long stay of 12 years in Ganagapur, Lord Dattatreya appeared in a dream and instructed Shri Ganesh Bhatt to return to Mangaon and lead the life of a householder, promising to incarnate as his son. It was after his return from Ganagapur that his eldest son Vasudev was born on Shravan Vadya 5, Shalivahan Shaka 1776, 26 ghatika after sunrise (4 – 4.30 pm) at Mangaon, near Sawantvadi, Maharashtra to this Karhade Brahmin family.

At the age of three years, Vasudev started attending the private school held in the Yakshini temple in the village. He had to learn writing with his fingers on a layer of dust, a very tiring and painful practice. Apart from the secular education in the school, Vasudev also received traditional oral education from his grandfather Hari Bhatt Tembe. With his sharp intellect and quick memory, Vasudev soon mastered the basics of Sanskrit grammar and poetry.

In 1875, at the age of 21 years, he was married to Bayo – later renamed Annapurnabai- the daughter of Babajipant Gode from Ranjangad.

He established Shri Datta Mandir in Mangaon in 1883. The construction of the sanctum was carried out with his own hands. The Datta idol in the temple was given to him by a sculptor at Kagal, who said that Lord Dattatreya had appeared in his dreams and ordered him to make the idol for Maharaj as per his specifications.

He was an expert Sanskrit scholar right from his childhood. He travelled across the country for 23 years, strictly following the harsh discipline of the Sanyas Ashram. All people had equal access to him. There was no discrimination in spite of his personal strict code of purity. People of all castes were the recipients of his grace and he was very sensitive and listened sympathetically to their sorrows and grievances and provided counsel which, if followed, would remove or relieve their sufferings.

The holy book Shri GuruCharitra was not supposed to be read by women according to Maharaj. Hence, for women to gain knowledge of the book, he wrote The Saptashati Gurucharitra Saar, a short version of the Gurucharitra.

He took sanyas 13 days after his wife’s death in 1891, at the banks of the River Godavari, when a Sanyasi appeared from across the river and administered the vows of sanyas. Later, he was given the ‘dand’ (monastic sceptre) by Shri Narayanand Saraswati at
Ujjaini.
Accordingly, as soon as the Amavasya gave way to bright Pratipada of Ashadh, Shri Maharaj sat up facing the Lord to the west, performed Tratak (steady gaze), controlled breath and quit the body with a loud chant of “Om”. The day was Tuesday, Nakshatra Ardra, Ashadh Shuddha Pratipada.

His body was immersed into the Narmada River. His samadhi(tomb) has been built on the river bank at Garudeshwar, Gujarat. There is a famous Datta Mandir in the same place.

Govt's campaign against Maoists: An analysis by Ram Madhav

Sun Jun 29 , 2014
by Ram Madhav, RSS Functionary. Home Minister Shri Rajnath Singh’s statement that the government wouldn’t hold any talks with the Maoists is a very welcome position. One can understand the unease of the Maoist-apologists. It has been a bread and butter issue for them. Perpetuate Maoist violence, force the government […] 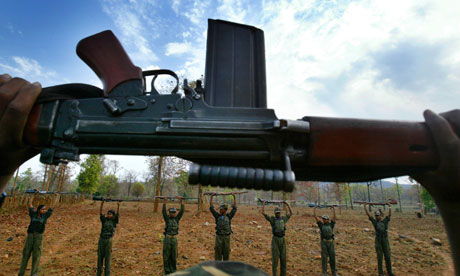