Bangalore March 11, 2014: Rashtriya Swayamsevak Sangh (RSS) has clarified today on the interpretation in some section of media about the concluding remarks of Sarasangchalak Mohan Bhagwat in Akhil Bharatiya Pratinidhi Sabha (ABPS) of RSS recently held at Bangalore and said such an analysis is ‘totally wrong’.

However, RSS has strongly denied the above report.

In his press release  RSS Akhil Bharathiya Prachar Pramukh Dr Manomohan Vaidya on Monday evening clarified that the interpretation in some section of media about the concluding remarks of Sarsangchalak Sri. Mohan Bhagwat in ABPS of RSS recently held at Bangalore is ‘totally wrong’. He also briefed the same to reporters at RSS ABPS venue of Bangalore’s Rashtrotthana Vidyakendra, Thanisandra.

“RSS has already made it clear that, this election is crucial for the nation. For a strong democracy, hundred per cent voting with national issues in mind is very much important. RSS workers will try to ensure maximum voting and conduct programs creating awareness about national issues. It is natural that BJP shares the views of RSS in many national issues, hence it may be naturally benefited by this campaign.  What Sri Bhagwat has emphasised in his concluding remark of ABPS is that RSS workers should keep in mind that they are not working for any political party but for national interest. And after the electoral process is over, they should concentrate on their chosen work of nation building” said Dr Manmohan Vaidya.

While replying to a question, Dr.Vaidya clarified that in present times, icons are important in election campaign. It is the prerogative of the party to choose their leader to lead the campaign and BJP has chosen their leader accordingly. 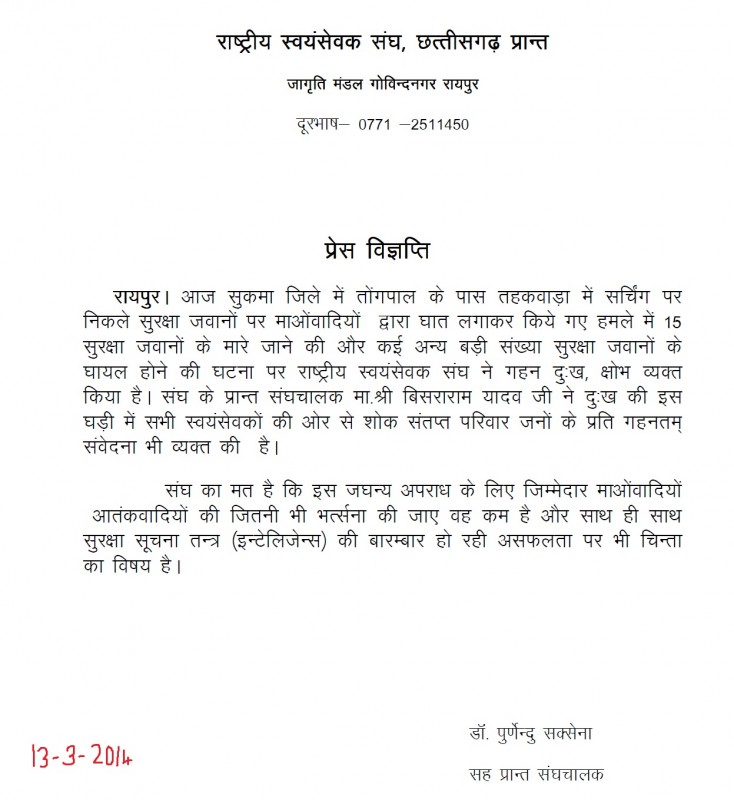