He was suffering from pro-longed illness, was severe since few months. The funerals of TV Deshmukh will be conducted tomorrow  October 24, 2014 at 11 am at Saidabad in Hyderabad

Ram Madhav, RSS Pracharak and BJP General Secretary, who is his Australia tour, expressed his Condolences. Ram Madhav said, ” Condolences on the sad demise of Kshetra Sanghachalak Ma Shri TV Deshmukh in Hyderabad today. He was a committed and dedicated Sangh Adhikari”

TV Deshmukh was born on 29 the July 1946 in Vangur village of Palamur district. He pursued his education in MA LLB . He was a RSS Swayamsevak from school days and after completing his graduation came as Sangh Pracharak for 3  years and served in Bodhan as Pracharak. He later founded Ferrocast, became a successful businessman. Eventhough he was busy in his business,  he was active on numerous social service projects.

Deshmukh was a member in Keshav memorial trust, Keshav Samvardhan Samithi and many more such social organisations. He played an important role in founding Vaidehi Ashram, an exclusive girls orphange that has been running for over 25 years.

In RSS he served as Dilsukh Nagar Bhag Sangachalak before being appointed as Pranth Sangachalak in 1993.

As Pranth sanghachalak , he toured length and breadth of Telangana and Rayalaseema regions and left a profound impact in the heats of thousands of Swayamsevaks.

From 2011 he has been serving as Kshetra Sangachalak, including Andhra Pradesh and Karnataka. Sat Oct 25 , 2014
New Delhi October 25: Statement issued by Dr Manmohan Vaidya (Akhil Bhartiya Prachar Pramukh RSS) “The RSS strongly condemns the controversial article published in Kesari a Malayalam journal in Kerala, on October 17, 2014. The views published therein are exclusively that of the writer and theRSS  has nothing to do with it. We, as a […] 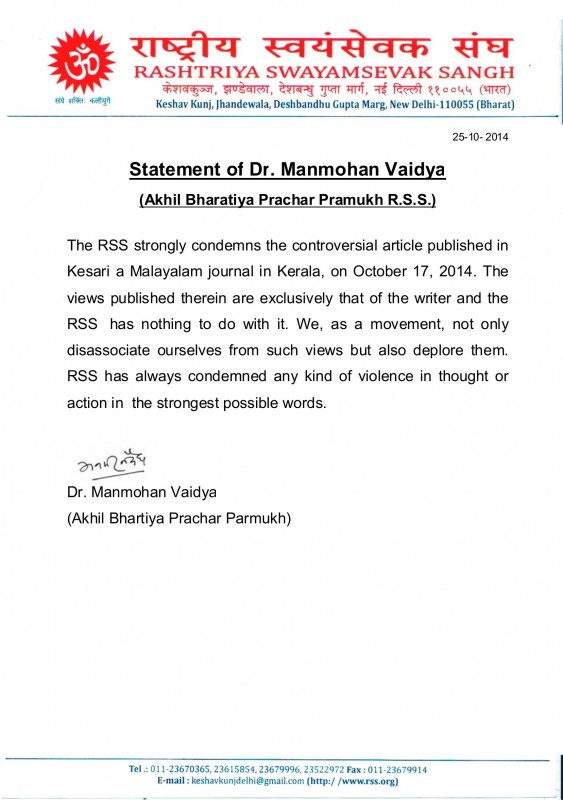