Bangalore March 24: RSS endorsed BJP’s decision to reject party membership of Pramod Muthalik, chief of controversial Sri Ram Sene. “Whatever decision the central party (BJP) has taken in this matter should be accepted by the people in the state and for that matter everybody,” RSS senior functionary Ram Madhav told reporters after delivering a lecture on India-China relations here on Sunday March 23.

Pramod Muthalik, who is facing some 45 cases including those relating to promoting enmity between two communities, was welcomed into the party fold in the day, but towards evening he was dumped following severe flak from within the BJP and opposition parties including Congress.  The criticism forced National BJP President Rajnath Singh to direct Karnataka party president Prahalad Joshi to withdraw the membership of Muthalik.

On External Affairs Minister Salman Khurshid’s remarks that the RSS celebrated the assassination of Mahatma Gandhi by distributing sweets, Ram Madhav said, “I don’t want to respond to people like Salman Khurshid who ate handicapped people’s food and all.” (Inputs from DNA)

On January 05,  2012 Rashtriya Swayamsevak Sangh (RSS) had made it very clear that it has no connection any in form with the organisation by name ‘Sri Rama Sene’, directly or indirectly. ( http://samvada.org/2012/news/no-links-with-sri-ram-sene-rss/ )

Senior RSS functionary, the then Pranth Pracharak of Karnatak Uttar Sri N Gopal had clarified that RSS has no link officially or unofficially with Sri Ram Sene or its any office bearer. RSS is not all responsible for any activities of Sri Ram Sene. Rashtriya Swayamsevak Sangh will not support or tolerate any anti-social activities by any individual or institute. Entire nation knows the contribution organisational profile and social commitment of RSS, said Sri N Gopal.

"Aadhar - Death blow to India's Sovereignty": A Discussion in Bangalore 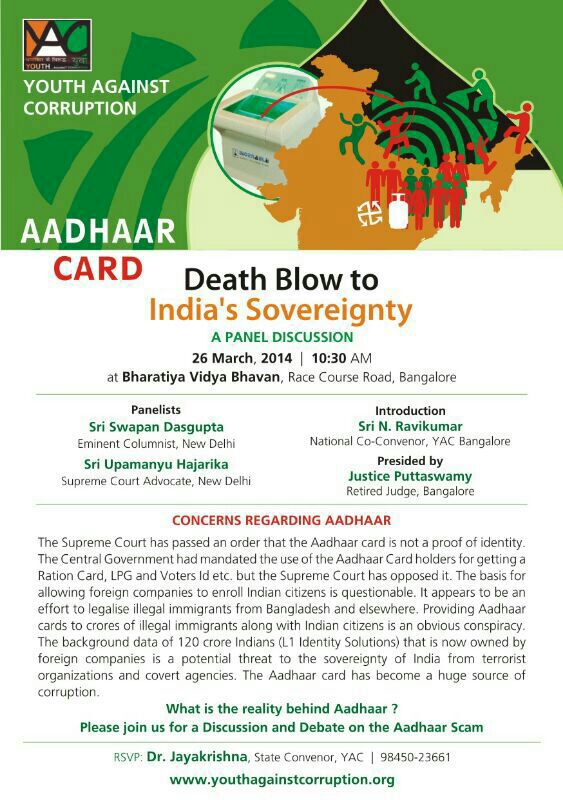