Nearly 3800 volunteers are participating on the first day of 2-day convention. On Sunday Aug 24th, RSS Sahasarakaryavah Dattatreya Hosabale will give the valedictory address. The convention began by paying respects to the two great souls who departed recently. Heartfelt condolences were paid to Padmabhushana Yogacharya BKS Iyengar who departed few days ago and to veteran Kannada writer, author and Janapith awardee Shri.U R Ananthamurthy who passed away on Friday in Bengaluru. RSS expressed its deep condolences to the departed souls and a minute of silence was observed on the occasion.

The inaugural session started with the invocation of the ‘Sanghtana Mantra’ संघ चद्वं सम वदद्वं from the Rig Veda by all the participants.

The convention was formally inaugurated by Shri.Bhagayya ji by lighting the lamp. Kumari Ohileshwari rendered the beautiful ‘dhyeya geeta’ ‘Jaya Jaya He Bhagawati Sura Bhaarati…’ on the occasion.

Shri.Bhagaaya ji addressed the gathering on the occasion. Following are some excerpts from his inaugural address.

“I welcome all mothers, sisters and brothers to this convention. By seeing the premises and you all I am able to experience the spirit of Swami Vivekananda, Bhagini Nivedita and Bhagat Singh. I hope you too are experiencing the same”

We are here to build a Samartha Bharata. Even the freedom fighters fought for the same cause from pre-independence period too. Once a revolutionary Raviverma went to meet Bhagat Singh in jail. Bhagat Singh asked Raviverma as to why he was laughing. Raviverma said that he is happy that he is able to give his life for the motherland. Bhagat Singh said remember that we need poorna swaraj, complete freedom and there should be social equality where every person in this country is treated as same without differences and each person should be self reliant. You should not forget this goal. But even today we have not attained our goal as crores of our people do not have social justice and Bhagat Singh’s goal still calls us.

Chanakaya identified the problem by saying that there are lots of good people in the society but they are scattered. Such good people should come together to work towards the goal. We see that happening here today and this is ‘Sangh Shakti’. This is the strength of the common man. Swami Vivekananda said the same and urged everyone to serve the society and bring change. I remember an incident from a college in Tumkur. The students were once asked what is the difference between man and animals or trees. Many M.tech students said that man has ‘buddi’ animals don’t. Another student said that man is mobile but trees cannot. But it was a young boy who caught my attention by saying that animals can live without the help of man but man cannot survive without nature. Man exploits nature and this is the result of the western thought process. As a famous saying goes, “Nature provides enough for man’s needs but not for his desires”.

VS Naipual had said that for centuries India’s contribution to global GDP was 25% but now its not more than 2-3%. Our society was independent and that is why our culture and dharma was independent. We had dharmashalas which used to serve the needy and were not dependent on the government. There was no poverty in our country. But we were looted and exploited by the westerners. When we say we need ‘Samartha Bharata’ we need to emerge out of the 800 years of Islamic aggression and 300 years of British mis-rule. We you, brothers and sisters work together with dedication, am sure we will see Samartha Bharat in our lives. But what should be our goal? This was conveyed to us by the founder of RSS Dr.Hedgewar and second Sarsanghachalak Guruji Golwalkar. The goal is to build a ‘samartha bharat’ which is same for one and all.

We have many examples before us. The spirit of Britain during the world war is legendary. People there told Winston Churchill not to succumb to Germany but fight tooth and nail and we are with you. Germany too was destroyed during the 2nd world war. But they worked together and today they are one of the most developed countries. Israel is one other example. The Jews were butchered and massacred world over. But they came together and formed their country again and today they are one of the most advanced country.

Swami Vivekananda gave a call for the need for education that will give livelihood to the masses using their innate skills. Today we are together because of Dr.Hedgewar. We would not have come together without his vision. We need to take forward this vision. We today have a favorable government. But there is some things the government can do but there is a lot more that we concerned individuals can do. We worship mother and goddesses but we are today ashamed because of the atrocities against women. Why did this happen so? It is because of the loss of values. We may gain skills but if we lose our values such atrocities happen.

We need a society where every man and woman should have self discipline, family life, social life and a habit of hard work. There should be no personal ego and jealously while working for the nation. One Narendra Modi cannot do much alone without support from each of us. There are lot of things to be done in the country. Village development, uplifting the poor, poverty alleviation, etc are to be done. We can rebuild the country only when everyone from various sections of the society come together.

Today we are losing the family itself and hence family values are eroding in the society. We can only achieve our goal when we get trained as Dr.Hedgewar envisioned because without discipline our intelligence is of no use. As APJ Abdul Kalam said each individual has a role to play in rebuilding the country but we need to be organized. Your energy and strength will take us towards our goal and am sure we will work together to achieve our dream of building a ‘Samartha Bharata’.”

The inaugural session was followed by an appraisal about the convention and activities by Shridharswamy, Pranth Sahakaryavaha. He reiterated that the convention was organized to get together people who were involved in various activities recently but also wanted to serve the society. Various sessions have been organized for the participants.  The participants have an opportunity to be part of different activities that fall in 10 various domains that aim to serve the society. The participants would choose the area of their interest and participate in the activities planned for that area. Some of the domains are Health, Seva Bastis, Intellectual activities, Jagaran (Social Awakening), Environment, Special services, etc.

More details about the convention is available at http://www.samarthabharata.org 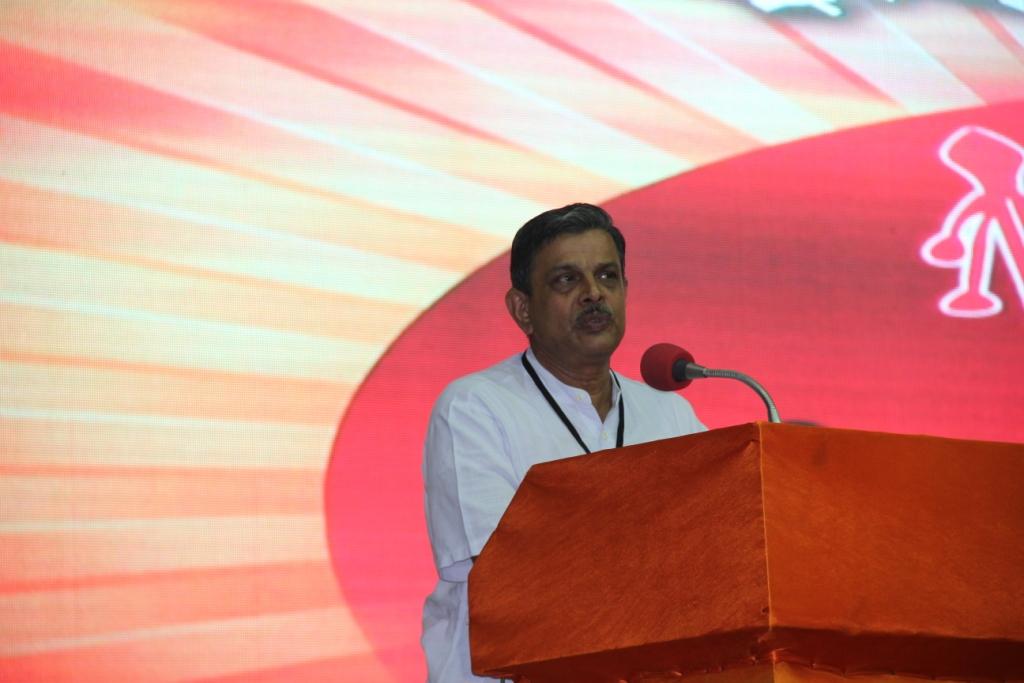