The news regarding Shri K C Kannan, former Pracharak and Sah-sarkaryavah of RSS, appeared in a section of media attributing fishy and scandalous reasons for relieving him is totally unfounded and smacks of malicious intentions.

Shri K C Kannan has been relived- not removed- from the responsibility of Sah-Sarkaryavah (Joint Gen Secretary) of RSS following his request to this effect. He was not keeping good health and had to be hospitalized a couple of times last year. He had conveyed to Sarsanghchalak and Sarkaryavah in Nov 2013 his inability to continue as pracharak and discharge the responsibility and requested that he may be permitted to take up his personal life. Accordingly, Sarkaryavah Shri Bhayyaji Joshi announced the same in the ABPS meeting just concluded in Bangalore.

However, it seems that some vested interests are deliberately   trying to tarnish the image of RSS by spreading canards. RSS strongly deplores these attempts. It is Pracharak’s personal decision to work as pracharak till one wishes. There are ample examples of karyakartas serving as Pracharaks for long periods and taking to personal life of family and profession, and continuing to work in different walks of social life including RSS as a karyakarta.

I appeal to media not to indulge in sensationalizing the issue on baseless information.

(This Press release has been issued through Vishwa Samvada Kendra, Karnataka on 13-3-2014)

Fri Mar 14 , 2014
Bangalore: RSS functionary Ram Madhav will deliver a lecture on his new Book  “Uneasy Neighbours”- India and China after 50 years of the War; on March 23rd, Sunday evening 5.00 pm at The Mythic Society Auditorium, Bangalore. Manthana, the forum for Intellectual dialogue will organise this event. Details of the program […] 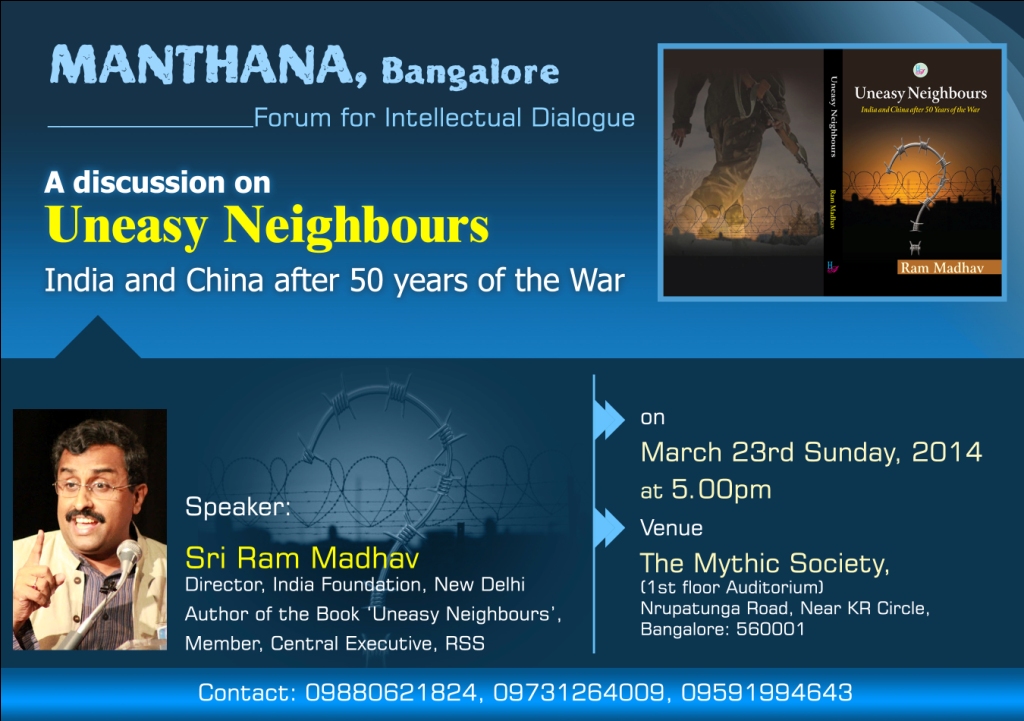