RSS Chief Mohan Bhagwat came to Bhopal on Monday morning May 26,  and addressed in Sangh Shiksha Varg with RSS functionaries. Known as the Sangh Siksha Varg, the ongoing programme from May 18 to June 8 is aimed at training officers who would manage the RSS organisational activities.

On Monday, while Narendra Modi was taking his oath as the 15th Prime Minister, RSS chief Mohan Bhagwat who was here in the Madhya Pradesh capital, quietly attending an organisational meeting. Few media earlier speculated that  RSS chief Mohan Bhagwat would be in the front row of invitees at Raisina Hill. But that is probably not how the RSS works.

“The RSS has its own work, the party has its own work and the government has its own occupation. What the RSS had to do before the elections is done. Now, the government will function independently and the Sangh will work in its own capacity. Invitations were sent to the RSS office and our executive members Suresh Soni, Ram Madhav and others were present in the occasion. This is precisely how the RSS works and this should prove that the functioning of BJP governments are not remote controlled by the Sangh.” said Anil Soumitra, a local RSS functionary.

Wed May 28 , 2014
Uttarakhand May 28: RSS former Akhil Bharatiya Seva Pramukh and Chief of Bharat Parikrama Yatra, Sitarama Kedilaya has written a letter to Narendra Modi and congratulated the latter on being elected by the majority Indians as the Prime Minister. Here is the letter by Kedilaya to Modi: ****************************** Namaste Shri […] 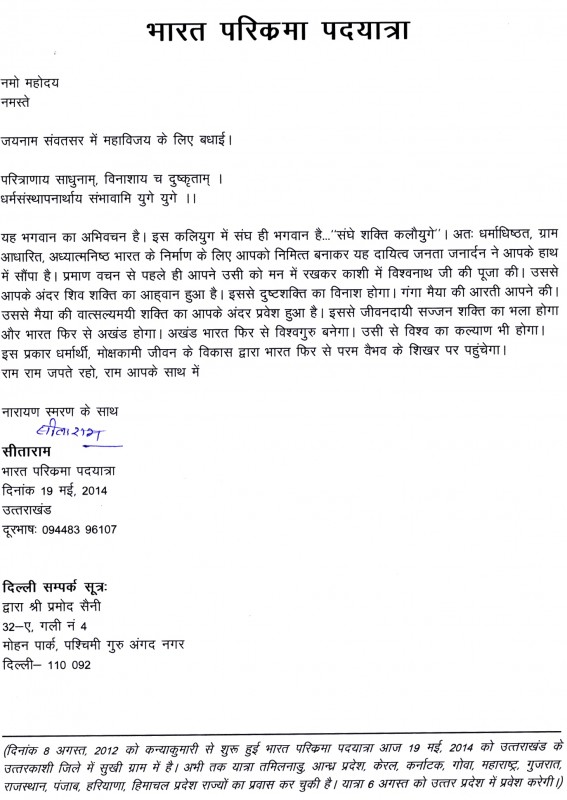