The event started with an attractive display of vyavam-yog (exercises) by the participants of the convention. Following is an abstract of his address.

We are aware of the fact that many educated people have always wanted to build a Samartha Bharat but until this thought does not come to those millions of common people, this hope will remain a dream. It was to achieve this endeavour that RSS embarked on such a convention. No doubt that an average Indian is good at heart and wants to do good. But such a person does not have the required avenues and opportunity to do good to the society. A single person thinks that he alone cannot do much and wishes that god or the government will do the job that they hope.

We know that the 1857 revolution failed to achieve its target. More than the Indians it was the Britishers who learnt their lessons and were able to rule us further for another 90 years. But our respect for the martyrs remains intact and we still draw inspiration from them.

On similar note the founder of RSS Dr.Hedgewar did not only wish to free the country from the British but questioned as to why we came to a stage where few Britishers were able to rule us. We were a tired society after having fought the invaders for a 1000 years. More than losing the battle we had lost hope in ourselves and hence we laid down arms in front of the colonial forces and became their servants. It is this hope that we had to revive and instill in each person that we can become a great nation again. This can happen only when each citizen of this nation embraces others and generates hope in one another. Dr.Hedgewar envisioned a nation where each citizen is hopeful is disciplined and can support the fellow citizen.

Maharshi Aravind had said “India does not live for it alone but to show light to the world and that is the destiny of this nation” But to achieve this we need to generate such people in this nation who can lead and show the path to others. This awakening is required at all times and not only in the times of distress, or during natural calamities or during elections. This nation has generated many eminent visionaries and great men like Buddha, Shankaracharya and Swami Vivekananda. Yet we seem to be sleeping again today. Why is it so? Dr.Hedgewar had said more the need for people who can die for the nation we need people who can live for the nation. RSS aims to build such men and women who can guide others towards the goal.

The tool which was created by RSS for this purpose is the Shakha. It is men and women who are built here who serve their society. Today if there are 1.25 Lakh+ projects which have been executed till date, it is not done in the name of RSS but the swayamsevaks who do it. Sangh’s aim is not to propagate itself but to see that the work is done by the people for the society.

We remember about 2 years ago, our brethren from the North-East were threatened in various parts of the country to go back to their states due to the riots in Assam. But it was the swayamsevaks from RSS who promised to safeguard them. Even for those who left to their home states, food and drinks were arranged for them in several stations along the route. It was the same swayamsevaks who served their countrymen in their times of distress.

Our society is also afflicted with the evil of untouchability. But the swayamsevaks of RSS have shown to the world that this practice can be eradicated just by coming together with love.

You have come here to dedicate these 2 days to know more about Sangh and various activities. Sangh accepts and endorses any good idea which is for the good of the society. Hence I appeal everyone to come and participate in the activities of RSS and not remain as a spectator from the outside.

Though we have 3500+ participants in this convention, we know that thousands more are there outside who wish to contribute to the society. We need to also involve more people in such nation building activity in the area of our interest. There are hundred avenues but the mission is one i.e Samartha Bharata, Bhauddika Bharata, Adyaatmika Bharata! We need to work on this with a missionary zeal. Since yesterday we have deliberated on the ways to achieve it.

It is to be noted that RSS did not organize this convention as it has a new government in place. RSS does not remote control or direct the government but only works to organize the society. Today the foundations of our society is stronger than it was decades ago and this RSS has achieved slowly. Every initiative takes time and we have to be patient. So is the case with nation building which will not happen at the pace we want. This is also not possible by just one person or one government. Swami Vivekananda had said he need 100 thousand young committed men and women who can work for the betterment of the nation. Similarly it takes hundreds of people to work together towards the cause.

Let us today pledge today that we will become the lamp that will light the society around us. Let us pledge that we will towards the activity we have taken up. I hope that you will join this effort of RSS and involve in such activities that will benefit the society and help build the nation.”

The event ended with the rendition of the RSS Prarthana by all the participants. One thought on “SAMARTHA BHARATA concludes; RSS Sahsarakaryavah Dattaji calls to participate in the activities of RSS” 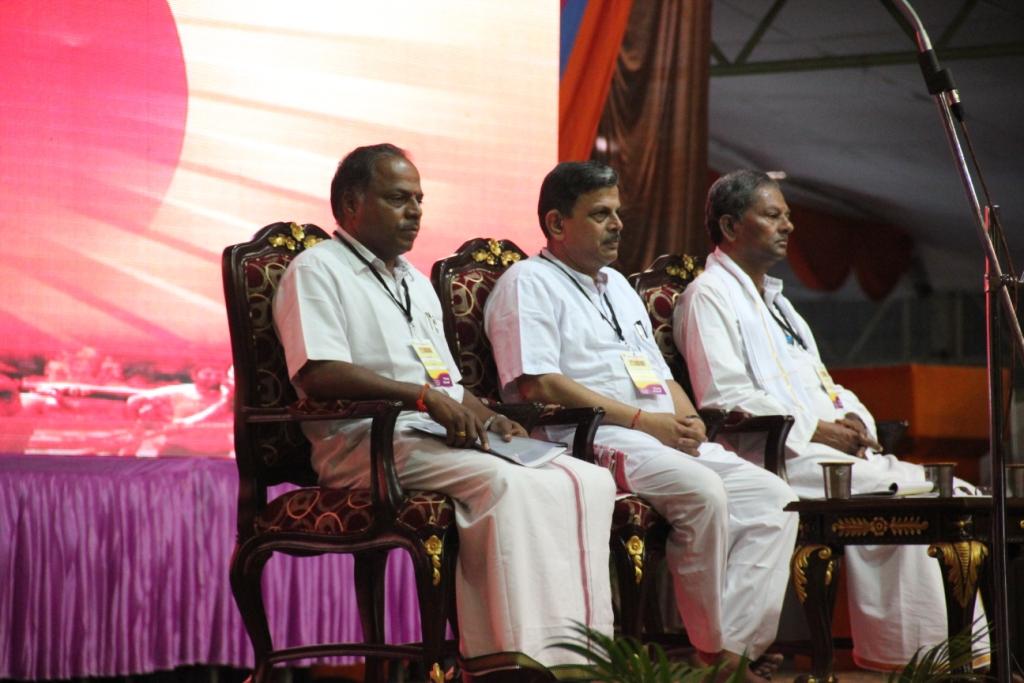