New Delhi, March 4, 2014: Uttar Pradesh MLA Irfan Solanki along with his hundreds of supports allegedly attacked Resident Doctors & students of medical college in Kanpur. Many doctors are severely injured in this attack, one doctor has been terminally disabled as his spinal cord was damaged after Irfan Solanki’s men allegedly threw him on the second floor, many doctors have been abducted by the gundas & are still missing. After this dreadful attack on the doctors, Kanpur police too followed & beat the doctors up in the most barbaric way.

ncer Surgeon, India Health Line’s Founder President & VHP International Working President Dr Pravin Togadia said, “Doctors are the most vulnerable group in Bharat as they are physically attacked, terrorised & intimidated often by the politicians. We strongly condemn MLA Irfan Solanki’s terror attack on the Doctors. We also appeal public communicators like media to understand the plight of the doctors rather than blaming them for striking work. Doctors will treat patients in special camps on the roads so that the ill are treated. However, social service mantle is also on the politicians & governments; not only on the doctors, lawyers & other professionals. When professionals are attacked & physically hurt this way, the entire academic, medical & professional fraternity is attacked.”

Dr Togadia demanded immediate arrest of UP MLA Irfan Solanki & his men who were on the spot as Irfan Solanki has been giving interviews on media that his 2 cars had been damaged at the medical college hostel. Therefore, the question is that what was he doing at the medical college hostel in 2 cars? Who were in those cars? Police claim that some desi guns & weapons were found in the rooms of the doctors. Such ridiculous allegations are insulting & removed from the reality. Suppressing the truth & denying justice to the medical fraternity will not deter the doctors from serving the needy patients even while striking work. Uttar Pradesh Govt must immediately arrest MLA Irfan Solanki, cancel his posts & slap terror cases against him. UP Govt has instead jailed many doctors & injured many others. We demand that all jailed doctors must immediately be released with all cases on them withdrawn. The injured doctors must be given compensation of Rs 7 Lakh each. UP Govt must apologize for the terror meted out to the doctors. Dr Togadia also said that all doctors all India will firmly stand by the decision of IMA (Indian Medical Association) in this issue & also support the Uttar Pradesh doctors in getting justice. 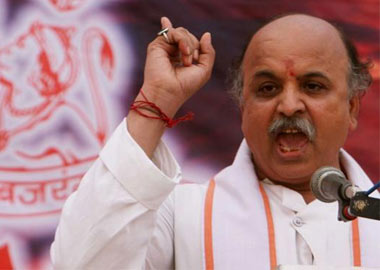