The event was attended by politicians, spiritual leaders, and diplomats – including Pakistani High Commissioner to India Abdul Basit.

The project was initiated by Swami Chidanand Saraswati in order to put forward the correct facts about Hindu religion and culture 25 years ago. It was presented to President Pranab Mukherjee earlier this year, and will be launched by UK PM David Cameron in London later this month.

Vice President Ansari gave a history of encyclopaedias and spoke of the different texts in the genre. He also flagged a specific feature of the book, “There is, in addition, a conflation of India as a country of great antiquity and Hinduism as an ancient and universal faith having its philosophy, practices and rituals.” This conflation is often found in texts sympathetic to the Sangh worldview.

Ansari said the rationale for this had been given in the text itself by the institution heralding the project. This rested on the premise that India’s spiritual heritage was misunderstood in the west, and there was need for an ‘authentic, objective, scholarly, standardized, and comprehensive source of reference and information’. Ansari said this and other imperatives were understandable ‘in the context of a segment of the Indian community in the west’. The VP’s emphasis on a segment of Indians rather than all Indians was marked.

RSS Chief Mohan Bhagwat highlighted the pragmatic and global dimensions of the Hindu ‘dharma’, and its exceptional character. He distinguished between religion and rituals, spoke of the need to be flexible while rooted, prioritized experience over any written text, and referred the Hinduism as a religion to which different people at different stages had contributed. “Hinduism is not the property of just Hindus, it is their legacy. But it is for the world. Today, the world wants it. 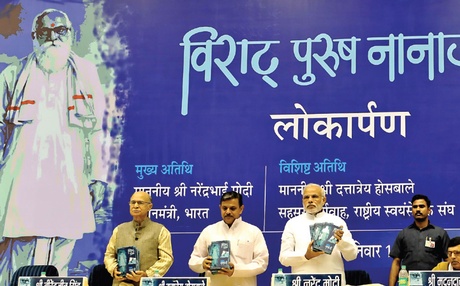