Dr Pravin Togadia, general secretary of VHP has denied saying the sentences attributed to him in Times of India and some other media and sent a legal notice to media houses. Dr Togadia has clearly said that report published in media is fabricated and written with malicious intention to malign his and organisation’s name.

RSS leader Ram Madhav has also said in a tweet: “Praveenbhai had not said anything that was attributed to him. It ws a fabricated news. No Swayamsevak thinks on those lines.”

TO WHOMSOEVER IT MAY CONCERN & TO ALL PUBLIC COMMUNICATORS, GOVERNMENT ORGANIZATIONS & SOCIAL ORGANIZATIONS As advised by & on behalf of my client Dr. Pravinbhai Mohanlal Togadia, age 57 yrs, I S. D. Jani Advocate 12, Shivshakti complex, High court Road, Bhavnagar, Gujarat  India do hereby state as under.

1.          That the report about a misinformed incident in Gujarat as appeared in an English newspaper Times of India dated April 21, 2014 which per our information, has appeared in the said news paper’s almost all India editions under varied headlines, is false, malafide & mischievous.

2.          That significantly, on the same day, i.e. today i.e. April 21, 2014 in yet another English newspaper namely Indian Express dated a completely different report has suddenly appeared which is about a misinformed description of an incident in Uttar Pradesh village in dist Pratapgadh.

3.          That it also is noticed that a heated debate has begun on yet another English TV channel namely Times Now on the said misinformed mischievous report as mentioned in the said Times of India.

4.          That the entire sequence of events as mentioned in the above 1, 2 & 3 clearly show that there is a bigger conspiracy against my client not only to defame him in public life but also to put his life & the lives of his family members & of the people associated with the organizations he is associated with in danger.

5.          That my client happens to be an International Working President of VHP i.e. Vishwa Hindu Parishad with Head Office in Delhi. The said organization is known to be caring for Hindu Well-being & welfare.

6.          That my client has been provided with the security of the Z+ level by the concerned governments to protect him from physical attacks on his life.

7.          That under the rules of the above said security level, the travel, stay & other details of the secured person are supposed to be kept confidential by the concerned authorities who provide the security to ensure that no pre-planned attacks take place on the secured person.

9.          That while travelling my client was told by one of the security men that a large group was protesting on the route because know that Togadia were to travel from this route.

10.        That my client as mentioned above was traveling at night, asked the security man as to how did the group know of the route which was supposed to be confidential per the security rules. The concerned person did not reply.

11.        That after reaching the night stay place i.e. the house of Mr. Bhavin S. Jani again my client was informed that the same group that was protesting for some reason wanted to meet him. Although tired by the day’s hectic work of introducing the free medical service to all in India, my client agreed to meet the said group for 5 minutes.

12.        That then the group of around 1000 people came to give my client a memorandum & presentation about how their houses were purchased under force & duress by some people.

13.        That the said group also informed my client that they stayed in an area in Bhavnagar before & even there their houses were forcibly purchased & that they moved to another area where there were temples & that even the new place they are being hounded to sell their houses to another group.

14.        That hearing their plea, as a law abiding citizen, my client advised them to follow the legal process of writing to the local administration, the concerned state government & approach the court if they felt that they are being forced into any selling of their houses.

15.        That my client also informed that there had been a ‘Disturbed Area Act’ existing in some places in Gujarat which was enacted by the earlier Government & that the said group may find out if the said act was applicable to them in the said matter.

16.        That we wish to state here emphatically that there was nothing socially or legally wrong in the above advice given by my client to the said group as mentioned above.

17.        That after one full day of this incident & with no provocation whatsoever, to our distress & surprise, we found the malicious report about our client in the English news paper namely Times of India dated April 21, 2014.

18.        That the said report as mentioned in above 17 gives a completely false story intended to malign my client socially & also putting his life in danger.

19.        That the timing of the other media reports such as in Indian Express front page which are totally unrelated of the misinformed incident of 2012, popping up on the same day i.e. April 21, 2014 mentioning my client’s name in a malicious way & then media debates followed by these reports are a definite conspiracy of planted stories by the vested interest parties against my client.

20.        That we hereby deny any such malicious reporting by all the media as mentioned above & demand the immediate CBI enquiry into the matter as mentioned hereunder:
(a) That who, how, to whom & why disclosed the security information such as travel route, stay place & so on, which is supposed to be kept confidential for the Z+ category
(b) That who all were involved in tracking the movement of my client during his travel & disclosing to the public in general even without verifying with my client whether he knew the said people.
(c) That who arranged the said Times of India reporter to be at the secured route late at night without any information to & permission from my client despite the Z+ security.
(d) That who managed the same say simultaneous appearance of reports in two different English news papers all India i.e. the misinformed, false & malicious reports of 2012 & 2014 that is a night before.

21.        That my client while denying of speaking of any inflammatory words as mentioned in the said Times of India report under different headlines all India as filed from Gujarat, demands a CBI investigation into the larger conspiracy of putting his life under threat by disclosing his security travel route & place of stay to general public.

22.        That my client now fears that this is a larger conspiracy in the General Elections time to draw benefit in votes at the cost of his freedom & his life. That my client also fears that the said orchestrated malafide, mischievous & malicious reporting of unrelated misinformed incidents in different media has been aimed at targeting his public & social life as well as the lives of my client, his family members & the people in the organizations with which my client is associated with.

23.        That the above suspicion is strengthened with the fact that for the past 3 months my client has been travelling extensively in India to introduce the Free Medical service for the poor & needy patients. That the regional media had been mentioning the same as but the said English media has not been mentioning the positive medical service however, the same Times of India, Indian Express & Times Now have simultaneously targeted my client on the misinformed unrelated incidents in a criminally defamatory, malicious & mischievous ways. That this proves that there has been a completely political conspiracy behind such ill-reporting about my client with the intention to harm his reputation, image & life and then to draw political mileage out of all this

24.        That once again while denying the concocted reporting in the above said & if so in any other media as false, malicious & malafide, we state here that such criminal conspiracy against my client may cause danger to my client’s life & reputation & that in such circumstances the entire criminal, financial, social & technical liability will be of the concerned Governments, its authorities, its various departments & all the people including the said media & all public communicators who have been involved in such a criminal activity against my client as conspirators.

25.        That we urge the Hon. Supreme Court to take note of the probable lethal attack on my client’s life, reputation & also lives of his family members as well as the people associated with the organizations to which he offers his services.

26.        That we urge all the public communicators to immediately refrain from spreading malafide, false, criminally defamatory & dangerous stories against my client & putting him in life threat, failing which my client will be free to take further legal steps as stipulated under all prevalent laws & Acts.

Mon Apr 21 , 2014
New Delhi April 21, 2014: RSS has clarified media reports on VHP President Dr Pravin Togadia is fabricated and said “No Swayamsevak think in those line”. RSS senior functionary Ram Madhav in an interaction to CNN-IBN and also through a tweet said, “Praveen bhai had not said anything that was attributed to […] 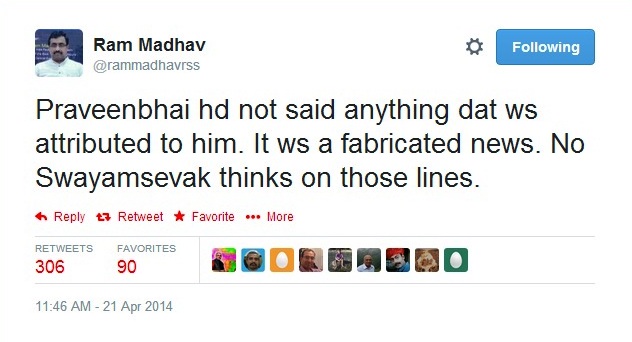