Quite unexpectedly, yet another word, “Ghar Vapasi,” has come to hog the limelight. The simple meaning of the word is “home coming.” It is a word that has come in handy to those people, who had once stranded away from the Hindu Dharma, and are now desirous of coming back to the Hindu fold, either individually or enmass.

Although the name is new, it is long since the process of Ghar Vapsi has started. During the Mughal period, the Hindus, who were converted through deception or coercion, used to return to their parental Dharma, adhering to the procedure laid down in the Devala Smrithi. Later, during the period of the East India Company and the British, the Suddhi movement, launched by the Arya Samajunder the leadership of Swami Dayananda Saraswathi, started taking roots.They had also made elaborate arrangements to bring back those who had left their Swadharma. So, although the process of reconversion could not keep pace with conversion, it had started picking up momentum.

Hindu society not being a monolithic structure, had its own limitations in gaining an equal momentum. The Islamic and Christian communities believe in one prophet, one God, and one community, and for them proselytizing and religious conversion are their sacred religious duty. Apart from this, the Hindu preceptors and Gurus had to perform the difficult of feat ensuring against the disintegration of their own society, without, at the same time, taking recourse to the dubious methods employed by the others.

Along with this, the onus of guarding against exorbitant increase in populationhad also fallen to the lot of the Hindu society, which ultimately led to the depletion of the Hindu population. Bharat is the only nation in the whole world where Hindus are in majority. Being a race facing the threat of extinction, the Hindu society has the inevitable responsibility of retaining their majority status here. Further, there is no denying the fact that the secularism and tolerance we take pride in, exist here in tact only for the reason that Hindus form the majorityhere.

In the past, when Pakistan and Bangladesh were part of Bharat, the curse of religious bigotry, discrimination and intolerance was totally absent at these places. But what happened when these places seceded from Bharat is common knowledge. On the other hand, Sikkim, a Hindu Majority region, continues its secular tradition even after its accession to Bharat in 1975. And these incontrovertible historical facts form the right answer to the question why Bharat should continue to be a Hindu majority nation? Here, let us remember, America, which boasts of its individual liberty and freedom, is a Christian country.

At this juncture, we have to add one more point. Hindu is intrinsically and inseparably connected with the geographical entity called Bharat. And hence we find eulogies being sung about Bharat in almost all of our spiritual texts and literature. Viewing the whole world as a bird’s nest, the land as the mother,Bharat as the Mokshabhumi (the land of deliverance), are peculiar to Bharat.Hindus cannot ever imagine about a spiritual life sans Bharat. Hence, conversion of Hindus is not merely the personal affair of an individual, but certainly has a national dimension as well.

It is this realisation that made Mahatma Gandhiji to declare: “If at all I get an opportunity to legislate, the first thing I would be doing shall be banning religious conversions.” Swami Vivekananda’s opinion was also not different.

The present controversy regarding the Ghar Vapsi is caused by the ignorance about this background. The argument that conversion is acceptable, but notreconversion, is something queer .In effect, that would make the opportunity to convert or get converted the exclusive prerogative of some particular section, which is absurd.

Those who subscribe to this view would pretend affection and advise Hindus:“After all, you are Hindus and activities like conversion, etc. do not befit you. You can give up Hindu Dharma; but to return or facilitate others to return is not fair. After all, were they not forced to leave because of untouchability anddiscrimination in the name of caste? Would it not be ungratefulness on their part to leave the religion that had given them refuge and protection when they had to face suppression? In case they return, to which caste you will fit them into? Thus goes their arguments.

But what is the ground reality? In spite of employing all sorts of tactics like allurement, encouragement, coercion and inhuman atrocities, as had happened in Goa, they could succeed in converting only a small fraction of Hindus. Even from among our brethren belonging to backward sections, who had to face all sorts of discrimination and atrocities, they could convert not even 5 per cent.Because Hindus had realised that change of religion would lead to loss of identity. And for those who have lost their souls, there is no deliverance. Hence they rejected the call for conversion with deserving contempt. “We would take care of our problems,” was their refrain.

During those days, the Hyderabad Nizam had offered five crore rupees to Dr.Babasaheb Bhimrao Ambedkar to embrace Islam. Even in the Travancore state, the effort to convert the great social activist and reformer, Ayyankali, could not succeed. And the members of the Christian clergy had to quit half way through a public debate with the followers of Ayyankali, out of frustration.

And those who got converted, oblivious of all these facts, came to becontemptuously called Dalit Christians and “Pooyislans.” And presently, they have been brought to such a pitiable condition, in which they are left with noother option than stretching their arms before the government for mercy.

Ones should keep this background in mind, while evaluating the phenomenon called Ghar Vapsi. Presently, people are neither illiterate nor gullible. Hence they are capable of seeing through the double standards of those who seek to convert them, and also correct the follies they had committed in the past. And to try to hold back such people through jugglery of words would be a futile exercise. The freedom of religion guaranteed by our constitution is applicable to them also.

And if you have to put an end to religious conversions, a law has to be enacted,as envisaged by Mahatma Gandhiji, through necessary discussions. Except in a few states, nowhere else in Bharat exists any law that prohibits religious conversion, even through allurements and coercion. Recently the Kerala HighCourt had invited the state government’s attention to such a need. But that call went unheeded for obvious reasons.

Revered Guruji Golwalker had made his opinion in the matter unambiguously clear as early as 1956. He said: “There is nothing wrong in those who have embraced other religions continuing with the practices of such religions. However, all doors should be thrown open to those who wish to return to the fold of their Matru-Dharma. And the Hindu society should mentally prepareitself for it.”

Anyone who is committed to his society will feel elated when the numbers in his community increase, and get depressed when the numbesr decrease. And it is in this context the Rashtriya Swayamsevak Sangh views Ghar Vapsi.

KASARAGOD: Vijaya Shakti Sangama has been postponed to February 01, 2015 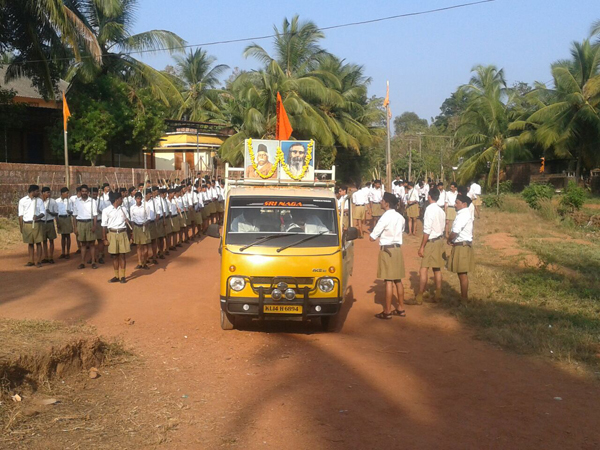