New Delhi: A statement on Mother Teresa by the RSS chief Mohan Rao Bhagwat has led to a nationwide controversy. Speaking at an RSS programme, Mohan Bhagwat said that Mother Teresa’s caring for the poor and the sick had religious motives and the conversion was the main intention. Minutes after he made this comment, people on the other side of the ideology started questioning and condemning his statement. The opposition Congress to TMC to the Left have strongly criticized his views on Mother Teresa asking him to withdraw it. Twitter is also abuzz with both pro and anti Teresa tweets. However, it is not the first time that Mother Teresa’s works are being questioned or criticized.

Mother Teresa faced several controversies even during her own lifetime. She was questioned by many including the several Western scholars. Some of them were the same Roman Catholics like Mother Teresa herself.

When the Vatican decided to beatify her, researchers were called into question the saintly image of Mother Teresa after carrying out research into her life. According to a report in United Kingdom’s ‘Daily Mail‘ published in March 2013, a number of critics have questioned how much of the saintly image of her is justified. Writing in journal Studies in Religion/Sciences, Prof Serge Larivie and Genevieve Chenard, say Teresa’s hallowed reputation does not stand up to scrutiny. Professor Larivie said, ‘While looking for documentation on the phenomenon of altruism for a seminar on ethics, one of us stumbled upon the life and work of one of Catholic Church’s most celebrated woman and now part of our collective imagination – Mother Teresa.

‘The description was so ecstatic that it piqued our curiosity and pushed us to research further.’ After studying nearly 300 documents on her life, they concluded that a number of issues surrounded the nun were not taken into account by the Vatican. These included ‘her rather dubious way of caring for the sick, her questionable political contacts, her suspicious management of the enormous sums of money she received, and her overly dogmatic views regarding, in particular, abortion, contraception, and divorce.’

They also say that following numerous natural disasters in India she offered prayers and medallions of the Virgin Mary but no direct or monetary aid. But she accepted the Legion of Honour and a grant from the Duvalier dictatorship in Haiti, said Prof Larivee, and although millions of dollars were transferred to the various bank accounts, most of the accounts were kept secret. Dr Larivie says, ‘Given the parsimonious management of Mother Teresa’s works, one may ask where the millions of dollars for the poorest of the poor have gone?’

Some claim that her image may have been built upon a meeting in 1968 with the BBC’s Malcom Muggeridge, an anti-abortion journalist who shared her right-wing Catholic values. It was his promotion of her which led to her fame, they say.

However her critics also admit that Mother Teresa was genuinely engaged in the service of the poorest of the poor and terminally ill patients and lepers. But they also argue that ‘Nevertheless, the media coverage of Mother Teresa could have been a little more rigorous.’

Renowned writer Christopher Hitchens made the most controversial remarks on Mother Teresa. Mother Teresa’s image as an innocent do-gooder was false, Hitchens had said, and he attacked it hard during his career. According to a report in ‘Christian Post’, quoting Mark Twain, Hitchens said about Teresa “Give a man the reputation for being an early riser and that man can sleep until noon.” Hitchens insisted that Mother Teresa was anything but the apolitical savior of the poor that she was known to be. Rather, he blasted the nun for being a willing political tool for the Vatican, a validator of corrupt, right-wing political leaders, and even more surprisingly, a suppressor, rather than savior, of the poor. Mother Teresa was incorrectly adored by the media, he insisted. In “Hell’s Angel”, a documentary, Hitchens made about Mother Teresa, the author reveals that what irked the most about Mother Teresa was claim to being apolitical, despite evidence he believed disproved her claim. Hitchens argued in the documentary that Mother Teresa’s use of her international fame to argue for anti-abortion policies was the result of her being a political tool for the Vatican, and she is said to have urged political leaders around the world to pass anti-abortion legislation in their countries, an ever-important issue for the Catholic Church.

Mother Teresa was born in Albania, in 1910. She became a nun at the age of 18, devoting her life to helping the poor. One of her most famous projects was a home in Calcutta ‘Missionaries of Charities’, that took in the dying and destitute, in order to give them comfort in their last days. She died in Calcutta in 1997, at the age of 87. She was beatified by Pope John Paul II in 2003. An article in FIRSTPOST.COM

The RSS chief, Mohan Bhagwat, is under fire for questioning Mother Teresa’s motives in serving India’s poor, for which she received a Nobel prize for peace. Among other things, Bhagwat said: “People like Mother Teresa did good work and service. But the aim was to convert the poor to Christianity. This kind of service is devalued if conversions are done in the name of service or work,” he said.

This statement drew criticism from the usual suspects, the politically “secular” elite, but two points are worth making in this regard.

First, motives may vary from individual to individual, and so if one does good work with a narrow motive, it does not automatically become tainted. I may help someone with the aim of going to heaven or to gain plaudits, but that does mean my act is, by definition, wrong or questionable. However, it would be right to point out my motives – to the extent they are important to understand why someone is doing something. This way we can discount the level of altruism in one’s acts.

Second, the question we really need to ask is this: would Mother Teresa herself have disagreed with what Mohan Bhagwat said about her motives? It is no secret that she believed fervently in the church and its message, and she was clear about her loyalties. She was, for example, opposed to contraception, divorce, etc, because the church taught her so and it was against god’s law. But she certainly did not believe in conversion by force or inducement.

The best way to understand what she stood for is to read her in her own words. An interview published by India Todayin 1983 throws light on what she would have made of Bhagwat’s comment about her motives. She did not claim neutrality in her service to the poor. Asked to choose between the Church’s Inquisition and Galileo, she unhesitatingly said she was with the church. She is unlikely to have disagreed too much with Bhagwat.

I am quoting parts of the India Today interview verbatim for the reader to draw her own conclusions (read the full interview from the archive here).

As a Christian missionary, do you adopt a position of neutrality between the Christian poor and other poor?

A. I am not neutral. I have my faith.

Do you believe in conversion?

A. To me, conversion means changing of heart by love. Conversion by force or bribery is a shameful thing. It is a terrible humiliation for anyone to give up religion for a plate of rice.

Just as the caste system in Hinduism is a fetter, do you feel that the labyrinthine regulations of the Catholic Church too are a fetter?

A. I never felt that way. Nor did I feel the necessity to change the rules of the Catholic Church. It is not relevant, too. In the hour of death, we are going to be judged by what we have done to the poor. We have consecrated our lives to give wholehearted and free service for the poorest of the poor.

Can the Church do any wrong?

A. No, as long as it stands on the side of God.

Mother, if you were born in the Middle Ages, and were asked, at the time of Galileo’s inquisition, to take sides, which would you have chosen – the Church or modern astronomy?

A. (Smiling) The Church.

Given her controversial stand, Mother Teresa did not lack for critics, with many of them suggesting that her reputation far exceeded her actual achievements in the service of the poor. Serge Larivie and Genevieve Chenard, writing in theStudies in Religion/Sciences Journal, probed her reputation and concluded that it did not stand up to scrutiny.

The Daily Mail quoted Prof Larivie in one of its reports as saying that the ecstatic references to Mother Teresa everywhere prompted them to examine her record, for which the Vatican beatified her in 2003. The researchers studied nearly 300 documents and found many things wrong with her Missionaries of Charity, including “her rather dubious way of caring for the sick, her questionable political contacts, her suspicious management of the enormous sums of money she received, and her overly dogmatic views regarding, in particular, abortion, contraception, and divorce.”

Dr Larivie noted Mother Teresa’s “parsimoniousness” and apparent unwillingness to offer the poor and disaster-struck real material succour – and opting for prayers – when she had more than enough resources for it. He said: “Given the parsimonious management of Mother Teresa’s works, one may ask where the millions of dollars for the poorest of the poor have gone?”

The tabloid said “her image may have been built upon a meeting in 1968 with the BBC’s Malcom Muggeridge, an anti-abortion journalist who shared her right-wing Catholic values” – a point made by Mother Teresa’s most trenchant critic, Christopher Hitchens (Author of God is not Great).

In a devastating article in Slate.com after the Vatican beatified her, Hitches called her a fanatic, a fundamentalist and a fraud.

Nobody should go as far as Hitchens in criticising Mother Teresa, but one cannot but conclude that the Church was as important to her as service to the poor. That she was motivated by a love for Jesus is for sure, but it is not likely that she would have worked for the poor purely for social motives. The church and her faith were probably above all else.

On Feb 24, Accusing Congress of trying to make “political capital” out of RSS chief Mohan Bhagwat’s remarks, BJP leader Meenakshi Lekhi on Tuesday claimed that Mother Teresa had herself in an interview said that her job was to bring people to the fold of Christianity.

Speaking to reporters outside Parliament House, the BJP MP said politicisation of such comments needs to be avoided and objected to remarks by Congress members and several other leaders on the issue.

“All my request to Jyotiraditya Scindhia, Mrs (Sonia) Gandhi and several others is don’t describe people, the way you want to describe them,” Lekhi said. She claimed that in a book, Mother Teresa had herself said that she worked to bring people to the fold of Christianity.

“And kindly read Navin Chawla’s book, who was an old Congress loyalist, on Mother Teresa, where Mother Teresa herself during an interview says that ‘a lot of people confuse me as social worker, I am not a social worker. I am in the service of Jesus and my job is to spread the word of Christianity and bring people to its fold’,” Lekhi added. 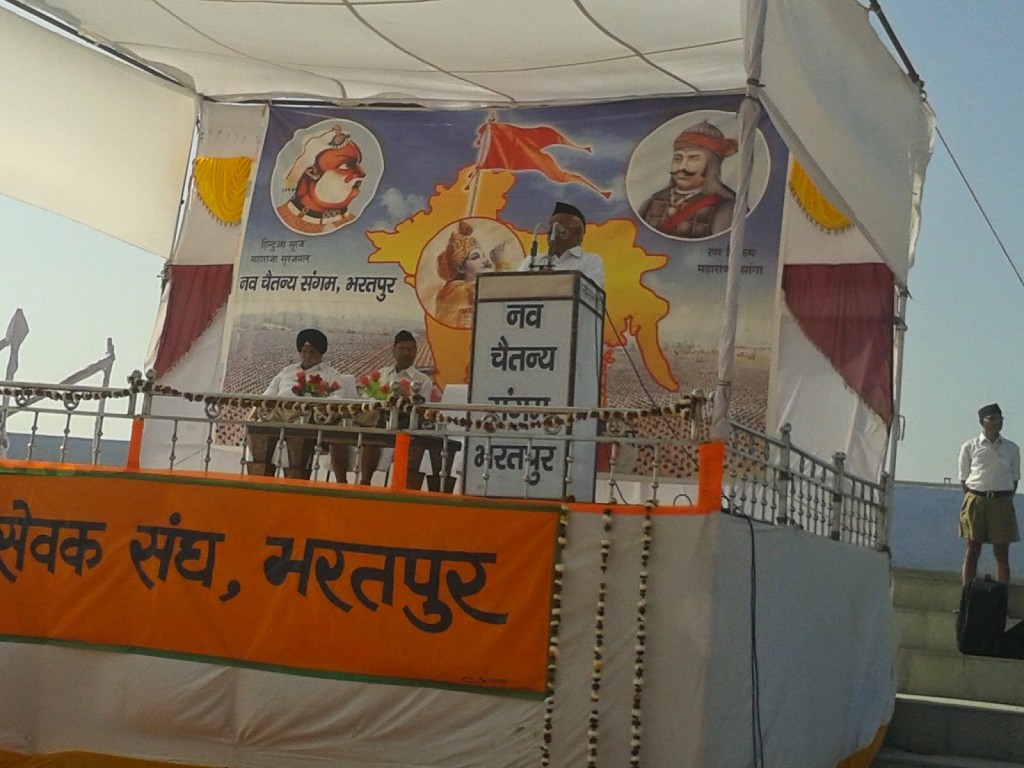