Walter K Andersen, co-author of The Brotherhood in Saffron: The Rashtriya Swayamsevak Sangh and Hindu Revivalism, considered a seminal work on the RSS and Sangh Parivar, is currently working on an updated version of the same (the last book came out in 1987). He speaks to Nistula Hebbar on his new book, the Aam Aadmi Party government in Delhi and Hindutva in the time of Modi Sarkar. Re-visiting the RSS, what has been your preliminary impressions, 28 years on?

I think now the RSS and its leadership and much of its membership is much more activist-oriented than before. Earlier it used to be highly philosophical; there was a certain kind of almost religious orientation. Now it’s more oriented towards policy and [has] a more practical approach to issues and how to get involved in them. Involvement and politicisation is a major trend within the organisation and it creates certain kind of tensions in the structure.

What kind of tensions?

Well, you still have people who are subscribers to the older view represented by [MS] Golwalkar [former sarsanghchalak of the RSS], well others as well, but most specifically Golwalkar: that the RSS should be a character-building institution — something like a school — where politics in many ways stained your character, and weakened you as a moral being, and that the RSS was a moral institution, and that it had to maintain its character as a moral institution and portray itself as “above the fray” if it had to exert influence.

I think there is less of a preoccupation with that. It’s not unimportant but I think that there is more of an activist orientation.

In terms of the RSS’ relationship with the political wing, the BJP, what are the changes you perceive?

Well, during the [general] elections in 2014, the RSS cadre and leadership came out enthusiastically for prime minister [Narendra] Modi and to a certain extent, I think were responsible for the level of the victory.

And if you look at some of the senior leadership in the ministries or even someone like, say, the new chief minister of Haryana, they are very obviously members of the RSS. There are all sorts of opportunities for jobs that have opened up or ways to influence the society that have opened up now that weren’t there before. They often say that they are the court of last resort and they still look at themselves that way; this creates some of the tensions between the political wing and the RSS, since if you are the court of last resort you should be above the fray, which you cannot if you are part of the fray, in the desire to [be in the] mainstream and [exert] influence.

It’s been over a year of the Modi government. How do you evaluate it?

I know many people feel that the government has been too cautious and hasn’t lived up to the promises of job creation, which was the expectation much of the vote was based on. Delivery on something like that takes time and getting new people to deliver is also difficult; that’s part of the issue. There is also a kind of internal seminar of the kind of things that are expected, a plethora of them in of them in fact, which has demonstrated what a political tightrope government really is.

A major example of that is the land issue, in which not only are there divisions between different political parties but within the Sangh Parivar itself. This is also a classic case where the RSS as a mediator can come into play. But the problem is that the Sangh Parivar and the government have two different ways of dealing with two different aspects of their relationship. One is the cultural project of the Sangh, which was earlier in the tenure of the government considered the real problem, like Ghar Wapsi and other things.

But it is the economic issues that may lead to deeper fault lines. While world over, a socially conservative political formation leans that way in its economic policies too, in the Sangh Parivar, cultural conservatism is offset by an almost Leftist economic-thinking. This government is feeling its way through these fault lines and that’s part of democratic process and has engaged with it. This government has been criticised and I haven’t seen it take steps to silence the criticism.
The Sangh has tried very hard to breach its upper-caste image. Where do you see the two national parties vis-a-vis caste politics in 2019?

A lot depends on leadership. One of the great advantages the BJP has is the RSS and its cadre. Now, with the huge membership that the political wing itself has, the way they will be trained will be important. Organisation counts and will make the critical difference. Even now however, 2019 will in my opinion depend more on issues such as job creation.
The Aam Aadmi Party seems to have captured the imagination of the masses. How do you see Arvind Kejriwal vis-a-vis the Sangh, and does the Sangh see him as a threat?

Yes, and he has some admirers within the Sangh too. I have spoken to many people in the organisation who think highly of his anti-corruption stance and admire his ability to shake his fist at the establishment.

Mon Jul 20 , 2015
Nagpur July 20: Akhil Bharatiya Karyakarini and Pratinidhi Baitak of Rashtra Sevika Samiti was held in its national headquarters, Ahalya Mandir of Nagpur from 17th to 19th July 2015. Around select 200 Rashtra Sevika Samiti functionaries from 32 Pranth’s (including Andaman and Nicobar Islands) attended this half yearly 3-day conclave. On the […] 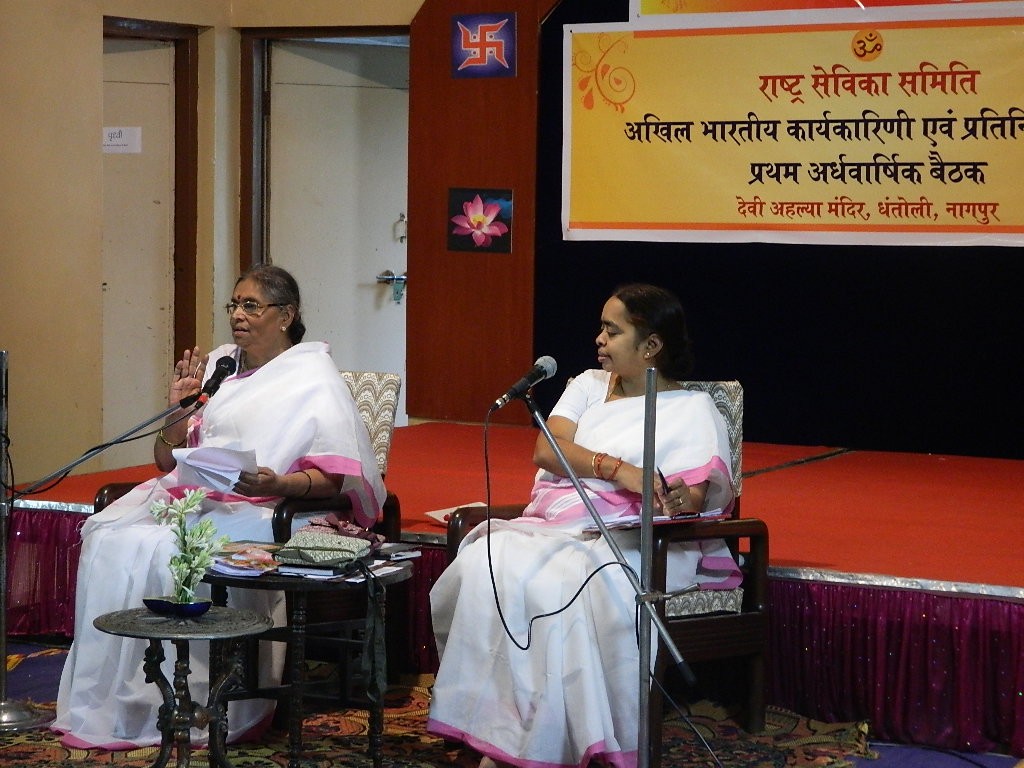