Ekatma Manav Darshan, also popular as Integral Humanism, was a major concept on upliftment of the nation and upholding the global peace  by value based human life, was proposed by RSS Pracharak Pandit Deeendayal Upadhyaya.

Pandit Deen Dayal Upadhyaya outlined his philosophy for governance in 1964 and presented an expanded version at Jan Sangh’s plenary session in 1965. The final version was delivered in the form of four lectures in Bombay, titled “Integral Humanism” in 1965. This year it is the 50th year for ‘Ekatma Manav Darshan’. ndayal Upadhyaya always stood for the common and poor people. He maintained that individual, society and nature are having the same atma in them.  In 1960s when Bharatheeya Jan Sangh was in its infancy and it had only handful of legislators in the country, Deendayalji did not think twice before going to Jaipur for dismissing eight MLAs who voted in favour of zamindari system from the party when the total party tally was hardly 10.

Former Minister for Human Resource Development Dr. Murali Manohar Joshi spoke on Pandit Deendayal Upadhyaya’s philosophies. Dr. Joshi called for the country to take ownership of its achievements in economics, politics and science to develop a uniquely Indian philosophy and thought. “India must start thinking in Indian terms. Unless we set our own benchmark, the world is not going to care,” Dr. Joshi said.

He said Pandit Deendayal Upadhyaya’s great contribution to India was that he introduced a new political vocabulary in the country that freed philosophers, scientists and social scientists from the bonds of Western analytical tools. Dr. Joshi noted that key indicators of growth and development of our economy continued to be measured using Western tools. He also called for Indian scientists to publish their works in Indian journals rather than foreign ones.

'No Compromise on National Integrity': Ram Madhav on Socio-Political situation of J&K at Bengaluru

Sun Apr 5 , 2015
Bengaluru 05 April 2015: BJP’s General secretry Ram Madhav, who is In-charge of party’s Jammu and Kashmir affairs said that “the BJP-PDP government in formed Jammu and Kashmir is a Government formed for governance of the state and to fulfill the constitutional obligation. The government is based on development oriented common […] 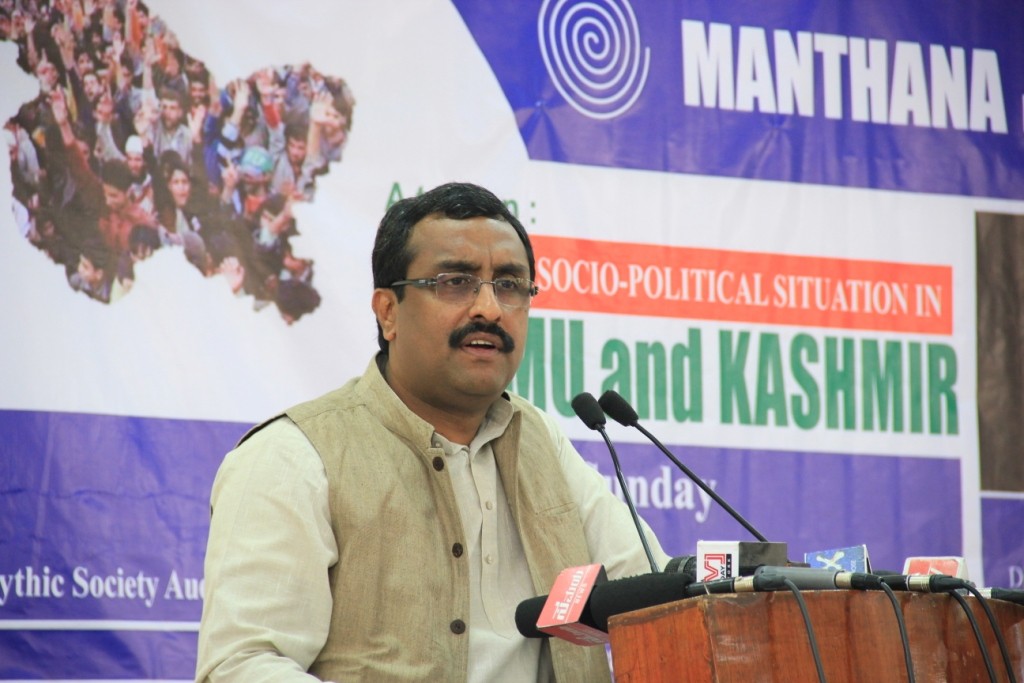