International Intellectual Forum of Hindus (A worldwide organization for the Justice of Hindus) has organized a seminar on Bharatiya culture and its importance for the survival of human civilization, Cow trafficking & infiltration from Bangladesh and its sociao-econamical & Demographical impact on entier India on 18th Jan 2015 at Amritdhara Gowshalain Bengaluru. The goal of the organizer was to connect all nationalist Hindu of Bangalore and to create awareness among the people regarding the threat on socio-economical & Demographical unbalancing due to infiltration and cow trafficking in eastern part India.

In his discourse Swami Madhusudhananda Puri spoke about the importance Bharatiya culture for the survival of human civilization. Swamiji explain the essence of Bharatiya Culture and rich value system of Hindu dharma. He has told that Hindus Dharma is the most tolerant dharma in the world, which has prospered even after many oppressions and intimidations. He explained elaborately that spirituality and science go hand in hand and is of great significance for the development of a nation as people of any nation are always bound by only three types of troubles namely Maanasika (mind set), Paarisarika(surrounding environment) and Prakrutika (worldly miseries) meaning worries emerge from mental, environmental and worldly miseries, that is the reason the number 3 is significant in many of religious practices like tying 3 knots in a marriage(mangalsutra), reciting shanti-shanti-shanti 3 times at the end of any prayer is synonymous with balancing and keeping at bay the 3 troubles. It is for this reason we invoke the divine by chanting the Gayathri mantra seeking salvation. But today salvation is something that can be achieved even by mere realization of our misdeeds and seeking the enlightenment of truth and following the right path. He further highlighted that from a very long time our Hindu customs are regarded as a superstition but if you understand in depth you will know that ever thing from sporting a bindi to piercing the ears, nose to wearing the holy thread has scientific reasons. In ancient times the Kumkum made of calcium and turmeric paste was applied on the Centre of the forehead to activate the Aagnya chakra, the ears and nose are pierced because they are pressure points that when pierced activates balanced blood flow. If we look around carefully, one can find that every other person is named after a God, why do we name our children after Gods and Goddesses? It is because by at least calling our children we remember and chant the paramathma.

But today people are shying away from such names and predominantly Hindus are made to believe and feel that, they are inferior about their Hindu identity, we are treated as minority in our own land and cannot call it as a land dedicated to us. Every aspect of our culture is looked down as a superstition by undermining the science and truth behind it. It is true that we have to be humans first as it is the biggest service to mankind and this can be achieved only with Hindu dharma but in a scenario where the world is heading towards domination of barbaric radical elements threatening our very existence it is time for Hindus to unite forgetting all our differences and show the world that our tolerance should not be read as weakness by propagating the essence of this tolerant religion. We often value material pleasures above family values which lead to unhappiness so we have to learn to love our fellow folks unconditionally which leads to happiness and creates a positive environment, this is precisely what Hindu dharma teaches us. Swamiji concluded the speech by praying the almighty to give us all the strength to sustain this peace loving religion.

Swami Madhusudhananda Puri’s speech was followed by Sri N.Thippeswamy the Prantha karyavah of RSS, Karnataka, who threw light on the existing problems of rampant cow trafficking which is happening under the guise of economic development and pink revolution.

He said that the cow which is esteemed and equated to our mother is today at the mercy of ignorant farmers and power-hungry politicians who have turned a blind eye to the mass murder of our holy cows. The life of a cow revolves around serving humans all along where we make use of all its products like milk, dung, urine, skin, its’ services only to be killed by us later mercilessly.

Truckloads of cows are transported each day across our borders into Bangladesh to be sold to the slaughter houses. When our farmers are deprived of their fields and cattle little spirituality would be left to realize, hence it’s the need to educate our farmers about the importance of nurturing our cows, the benefits of cow dung manure and how it adds to the nutrient value of the soil naturally, these farmers have been routinely misled from decades to believe that chemical fertilizers are better than organic manure when the reality is chemical fertilizers are the root cause for the emergence of many new diseases that afflicts us directly by entering our body through the chemical sprayed food.

Even the cow urine is used in medication to cure many deadly diseases, its dung builds earthworm activity faster without eroding the soil, but sadly our farmers are ignorant about the natural benefits and importance of natural farming. Although 70% of population are in agriculture our agriculturists don’t take pride in it, how can we flourish if we don’t take pride in what we do? The rural population is slowly moving into urban boundaries and live as urban poor. It is this gap we have to identify and bring about a win-win situation which is possible only by saving our cows as they are essential for an agro economic development much like the industrial development.

He elaborately explained about the current socio-political situation prevalent in West Bengal today which is an active hub for infiltration and illegal cow trafficking. He began by explaining the demand of a green belt by Jinnah during pre-independence times which even today is thickly populated predominantly by Muslims and how the 80-20 population ratio of Hindus and Muslims in West Bengal today has become 73:27 ratio when Hindus in Bangladesh have reduced from a substantial 29% to 9% today. He emphasized that we have to focus on dependency on bio-fuels which will not only save our cows but also bring our debts down thereby improving the economic stability of our nation.

This informative speech was followed by a questionnaire session where Mr.Roy took many questions ranging from infiltration to why WB is still fogged in a communist ideology and is often churning out more such Marxists in the same land which once produced stalwarts like Shyama Prasad Mukherjee, Swami Vivekananda, Subhash Chandra Bose and such unparalleled persons. He also highlighted that people need to raise their voices by being active and just be non-participant armchair critics, the government cannot do everything on its own it is proactive participation of people that will bring a change he said.

The interesting session had to wait for a brief lunch break followed by Goushala darshan.

The post lunch session began with an inspirational song by Mr.Dilip Taneja and the same enthusiasm was pumped in by Mr.Madhavan who spoke in depth about the importance of the Desi cow and their innate qualities. The Desi cow which is a much smaller than the European Jersey cow yields healthier A2milk which contains the essential goodness of milk when compared to A1 milk given by the Jersey cows, the Desi cow is the original cow that came into being much before the whole civilization he urged.

Wed Jan 21 , 2015
New Delhi January 21 : Kiran Bedi, BJP’s Chief Ministerial nominee for Delhi, on Wednesday Jan 21 described the Sangh as “very nationalistic” that has kept India united. The 65-year-old Bedi,said that the Rashtriya Swayamsevak Sangh (RSS), a very disciplined outfit and has been contributing significantly to nation building. “They( RSS) are […] 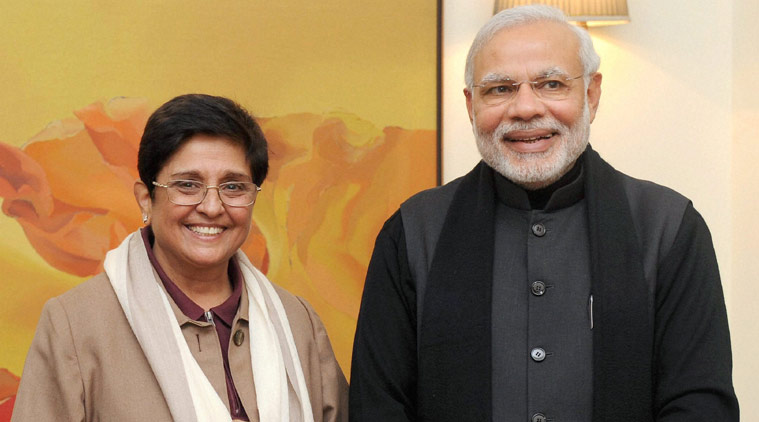