Shivamogga February 19: Popular Front of India (PFI) activists erupted huge violence in Shivamogga, one of the coolest city of Karnataka, which saw one death, several injuries and massive damage of public properties on Thursday.

“PFI activists all of a sudden started violent activities in Shivamogga city on Thursday. PFI shouted slogans against RSS. After the violence broke out, several RSS Swayamsevaks, general public were attacked by PFI” said a local RSS functionary. RSS Karnataka had severely condemned this violent incident at Shivamogga. M Venkataramu, RSS Pranth Sanghachalak expressed deep condolences on death of  Vishwanath, who died after grave injuries due to the attack by PFI activists.

According to the police, the three men who were riding the same bike, were stabbed by Popular Front of India (PFI) activists. While the bike rider, Vishwanathan, died, the other two — his two pillion riders — received grave injuries. They injured have been shifted to Nanjappa hospital.

PFI was organising its foundation day, as part of which a Unity March was organised.  When the rally, which commenced from Ashoka Circle in the evening, reached Shivappa Nayaka Circle, PFI activists all of a sudden started violent activities. Stones were thrown at cars parked on the road side.  Following incidents of arson and stone pelting, prohibitory orders under Section 144 of the Criminal Procedure Code were clamped in the city limits till Saturday evening.

The police resorted to caning to disperse the mob. Three cars were damaged in stone pelting. The violence soon spread to M.K.K. Road, Gandhi Bazaar, Nehru Road, and Garden Area. A shop in Gandhi Bazaar, two pushcarts near Shivappa Nayaka Circle, and three bikes near Nehru Road were torched. A mob also assaulted two persons near M.K.K. Road. They have been admitted to McGann Hospital. The incident forced the closure of shops at Gandhi Bazaar, B.H. Road, and Nehru Road. Security has been tightened.

Meanwhile, the Mangaluru city police questioned passengers returning to the city from Shivamogga. The police suspected that those leaving Shivamogga might be involved in the clash. Government and private buses were stopped and those returning from the event were questioned. The process has been videographed. The police are collecting information about those who attended the event.

The police imposed Section 144 around 8.30 pm. The police had asked the PFI activists, who had come from Mangaluru and Kerala, to return. Police also resorted to lathicharge to disperse the mob near Shivappa circle. Six rounds of tear gas was also fired in the air by the police.

The administration has declared holiday in schools and colleges.

'Here is the Answers for the 6 questions by Muslim Cleric of Sunni Ulema'; writes Kiran KS

Fri Feb 20 , 2015
Recently A delegation of Muslim clerics led by the Sunni Ulema Council general secretary Haji Mohammed Salees met RSS functionary Indresh Kumar and posed six questions to the Sangh including whether it has prepared a format to turn India into a Hindu rashtra (nation). This 6 six questions were given to […] 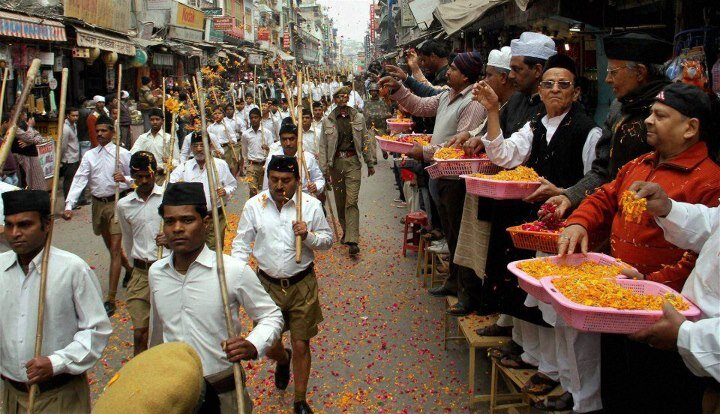