Dr Keshav Baliram Hedgewar (April 1, 1889 – June 21, 1940) was the founder of the Rashtriya Swayamsevak Sangh (RSS). Dr Hedgewar founded the RSS in Nagpur, Maharashtra in 1925, with the intention of promoting the concept of the Hindu nation. Dr. Hedgewar was born in 1889 on Gudi Padwa day YUGAADI, the New Year for people from Maharashtra, Andhra Pradesh and Karnataka. He hailed from a family which was originally from Kundakurti, a small village in Bodhan taluka Nizamabad Dist. near the border of Maharashtra and Andhra Pradesh states. Dr Hdgewar passed away on June 21, 1940 at Nagpur,

The full text of the book on Dr KB Hegdewar is given below.

2: IN THE HOMELAND OF “VANDE MATARAM”

4: IN THE THICK OF POLITICAL MOVEMENTS

6: IN SEARCH OF ANSWERS

7: FOUNDING OF THE SANGH

8: IN THE FACE OF CHALLENGES

A strong sense of duty, a complete absence of love of authority, an eagerness to project not himself but the organizational ideal, a spirit of renunciation and service – well, it is these traits of Doctorji that sanctified the seat of Sarsanghachalak.
As the Sangh grew, reports of opposition from Congress and Hindusthani Seva Dal came from many places. In some places the Seva Dal units even vowed to “demolish the Sangh.” Doctorji was sad to hear of these developments. But it was not in his nature to get ruffled or indulge in counter­offensives. Doctorji felt that one wrong could not be set right by another. And he simply continued building up the Sangh work ignoring opposition. A letter that he wrote to Dada Paramarth and Krishnarao Mohrir reads:
“In your letter, you have informed me of a significant development. Let us pray to God that He guide these critics. As far as we are concerned, we work with faith in God and heeding to the dictates of our conscience. If in this process we fail to please some sections, or if some are inclined to oppose us, what can we do ? All this has its root in politics. We need not be afraid of these expressions of others born out of malice.”
A few days after the baithak of Sanghachdlaks, news was received that the Congress had adopted a resolution proclaim­ing Complete Independence – Samprana Swatantrya – as its goal. Doctorji was immensely pleased. He immediately sent out a circular to all the Shakhas that they should congratulate the Congress and also celebrate 26th January 1930 as Independence Day. He said in the course of that letter: “This year the Congress has passed a resolution declaring Complete Independence as its goal. The Congress Working Committee has called upon the entire nation to celebrate Sunday the 26th of January 1930 as Independence Day. We of the Sangh are naturally immensely happy that the All-India Congress has endorsed our goal of Complete Independence. It is our duty to co-operate with any organi­zation working towards that goal … It is therefore suggested that all the Swayamsevaks of each Shdkha meet at 6 p. m. on Sunday, 26th January 1930, at the respective Sanghasthans. After offering salutation to the National Flag, i. e. the Bhagawa Dhwaj, the concept of Independence and the reason why this ideal alone should be kept before every one should be explained. The function should conclude with an expression of congratulations to the Congress for having accepted the ideal of Complete Independence.” In accordance with these instructions, meetings were held in all the places where Shakhas were functioning.
It would be useful to refer to the notes put down by Doctorji in the above context. These jottings throw clear light on the policy of Sangh with regard to a crucial national issue:
“The Hindu culture is the life-breath of Hindusthan. It is therefore clear that if Hindusthan is to be protected, we should first nourish the Hindu culture. If the Hindu culture perishes in Hindusthan itself, and if the Hindu society ceases to exist, it will hardly be appropriate to refer to the mere geographical entity that remains as Hindusthan. Mere geo­graphical lumps do not make a nation. Unfortunately, the Con­gress organization has given no thought to protecting the Hindu Dharma and Hindu culture. The organization keeps its eyes closed to the daily onslaughts by outsiders on the Hindu society. It is to fulfil this duty of protecting the Hindu society that the Rashtriya Swayamsevak Sangh has come into existence. But the Sangh harbours no ill-will towards the Congress. The Sangh will co-operate with the Congress in the efforts to secure freedom, as long as these efforts do not come in the way of preserving our national culture. The Sangh has indeed been co-operating with the Congress all along.”

10: IN THE FOREFRONT OF STRUGGLE AGAIN

14: IN THE THROES OF NATIONAL CRISIS 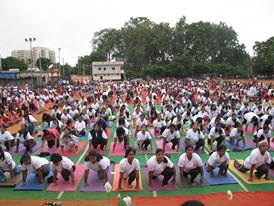