Bharatpur Feb 23: RSS Sarasanghachalal Mohan Bhagwat was addressing a function in village Bajhera, 8 kilometers from Bharatpur in Rajasthan where he inaugurated ‘Mahila Sadan’ and ‘Sishu Bal Grah’ an NGO for helpless women and children.

Here is the audio file of the speech.

“Mother Teresa’s service would have been good. But it used to have one objective, to convert the person, who was being served, into a Christian,” said Mohan Bhagwat, Sarasanghachalak of Rashtriya Swayamsevak Sangh, today at a function in Bharatpur in Rajasthan.

In reality, many people have contributed to the good service being done here. My service here is to only speak and that is what I mostly do by traveling across the country. I can only serve whatever I have and so I have served here through my speech. I am not speaking just to address you for the sake of it. This is my service.

As you might have seen here, those who come here and witness the work being done, they too will become volunteers to serve the society. This is because what we see here is the personification of service. When after the Mahabharata war, Yudhishtira conducted the RajasuyaYagna, a mongoose comes and rolls over the place and only half its body which was on the ground turns into gold. Then it goes in search of another such yagna where it could turn the other half of its body into gold. After sometime it comes in contact of a family that gives away everything it had in the service of their guests. The mongoose arrives here and rolls over the house and the other half also turns into gold. But in case, the mongoose was not able to find this family, I would recommend it to come at this event and roll over to turn into gold.

In fact, the mongoose had gone to Yudishtira’syagna only to convey that he need not feel too proud about his service as service is to be done selflessly without any pride in self. We do lot of service to the society but also deem it to be very important and feel proud of it. As normal men, we are born with the worldly attitudes and are susceptible to the wishes of our senses. But even in such a world, there are people who dedicated their entire lives to ‘seva’ and also exited this world without seeking anything in return. Such people and their service has to be encouraged. It is a man who serves others as animals serve only themselves. This is the way man has made them. An animal does not think why it was born or what it has to achieve in the world. Until it is alive after it has been born it feeds itself as much as required and finally dies. It does not even become like a demon who extracts more from others. An animal takes as much as is required for that meal and does not consume more than what is required, like a demon. But a man is different as he is a thinking animal. If he becomes selfish, he becomes a demon. If he works for the service of others he becomes bhagwan himself. It is such people to whom we should encourage. This is like how Raja Harishchandra was asked what he wishes to have and he replies that he wishes nothing for himself but only wants to give away everything to others. Despite all the difficulties that he faced due to the tests he was given by the devas, Yama appears and asks he could wish for anything for himself. Even then Harishchandra says that we only wishes for the well-being of people and animals and nothing for himself.

This is how ‘seva’ is done in our land. When ‘seva’ is done nothing is expected in return expect the wellbeing of the affected. But today we see that ‘Mother Teresa’ kind of ‘seva’ is being done. This kind of ‘seva’ should not be done. Her service may have been important but her service was rendered with an intention that those served converted to Christianity. Whether a person wishes to convert to Christianity should be left to the person. But to goad people to convert in the name of ‘seva’ is an affront to the service being done. Service has to be completely selfless and expecting absolutely nothing in return. Those who are the recipients of such selfless ‘seva’ may be thinking that they have seen their god in those who serve but those who serve would be thinking that their life became blessed after getting an opportunity to serve the needy.

There is not even pride after ‘seva’ because the opportunity was given to them to serve by the needy. It is such fervor we need to have for each other in a society. When such character becomes a part of a society, no one can find a fault in it and only good will happen to such a society. If our own people are becoming part of a conspiracy and we do nothing about it, then whatever ill will happen to them continues to happen. When people come from outside, known places are shown to them. But what can be shown to the people born here? We can show them people who inspire and take them to places that inspires them to work for the society. Those places which instills pride and those that reminds one of their duty towards the country are the modern day pilgrimage places. Today, by coming to this event in Bharatpur I could witness both these happening at the same place.

Yesterday I visited Maharaja Surajmal’s palace. I could see how we fought the invaders to retain our glorious heritage and history. This is what we have received from our ancestors. And today I saw here as to what is the duty we have towards the nation. Ramakrishna Paramahams also said the same. See bhagwan in others and serve them selflessly. Why should someone else from abroad come and serve our own people when we ourselves are here? We need to serve our own needy people and not delegate it to those who come from outside. A needy who is served will later become able enough to stand on his/her own and in turn serve other who are in need.

There are several kinds of ‘seva’. One way is to cater to whatever basic needs is missing in the needy. Second way is to show the way to fulfill the missing needs. This is like the difference between teaching a man to fish instead of giving a fish to a man to fill his hunger. Third is to teach a man as to how he can teach everyone the way to fish. This way there will be no need to serve anyone as everyone will cater to their own needs. Fourth is to organize for one of these i.e either arrange for the fish to be fed or arrange for teaching of ways to fish or see to it that everyone in the country learns to fish so that no one is hungry. This will happen when we feel that the needy are my own and my life is for their sake. To create such persons who think like this is most ideal way of service. Here we are witnessing all these four forms of ‘seva’.

The basic needs are being taken care of, people are getting to know how to cater to themselves, then there are others who are teaching others in different skills and finally we also saw those who are arranging for all the above. By witnessing this spectacle our lives have been enriched and felt divine. By we ourselves involving in these ‘seva’ activities and by getting more people to engage in selfless ‘seva’, our lives will be more divine. This is no less than the divinity we accrue through a pilgrimage. Marathi is my mother tongue and as we used to address our father as ‘theertharoop’ in Marathito which means he who has become divine himself by serving the almighty bhagwan and has thus become the caretaker of the world. Similarly, you people too have been involved in the service of the almighty and one day you all will become divine. With this wish and gratitude, I offer my deep respects to all and end my speech.” Thu Feb 26 , 2015
An article in IBNLIVE.COM New Delhi: A statement on Mother Teresa by the RSS chief Mohan Rao Bhagwat has led to a nationwide controversy. Speaking at an RSS programme, Mohan Bhagwat said that Mother Teresa’s caring for the poor and the sick had religious motives and the conversion was the […] 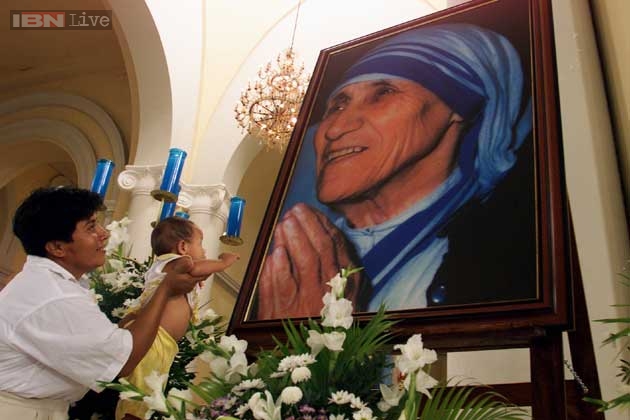