Wipro chairman Azim Premji attending a convention of RSS-affiliated organisations
and addressing the delegates there is special for an obvious reason. Premji is a Muslim and the RSS is known for its Hindutva worldview, which is considered to give an unequal status to the minorities, especially Muslims. The organisation has always denied this claiming that it does not discriminate between members of any community as long as they are Indian.  It is not a simple and easily accepted claim. When it is subjected to interpretations and conditions that go with it, it is often seen as going against the literal eaning. That is why the RSS’ invitation to Premji to attend the convention is welcome. It is not always that a prominent member of a minority community has shared the RSS’ platform with its top leaders. So, Premji’s attendance of the meeting and the message that he sought to convey there are important.

Premji underlined the need to recognise India as a great pluralistic nation and to accept the differences among its people. These differences may relate to religion, community, language, race or other categories.  The strength and vitality of our nationhood lies in these differences and the common thread of Indianness that runs through them. RSS chief Mohan Bhagwat also said that the status of person as a swayamsevak or not, or as a Hindu or not, has nothing to do with the service the organisation is doing for society. He also felt that the organisation should expand further to serve all sections of society.  This welcome attitude should extend to its idea of India also. Bhagwat had recently stated that all Indians should consider themselves to be Hindus. Such a definition would not be acceptable to all Indians. It is when Hindus, Muslims and Christians, or Tamils, Bengalis and Punjabis, and all others consider themselves Indian first and are at the same time proud to maintain their different identities that the nation is strengthened. It is this idea of a pluralistic nation that Premji underlined in his address.

The Wipro chairman also said that he considered it an honour to be invited to the meeting and to be with all those who were dreaming of and working for a better India. It is through exchange of and interaction between different views that ideas become clearer, get reshaped and gain greater vigour.  The very presence of Premji at an RSS function along with the Sangh leaders is a sign of an inclusive India. The importance of that image and the meaning of the message should not be lost.

Seminar on 'Role of Women in Social Harmony' held at Uttarakhand 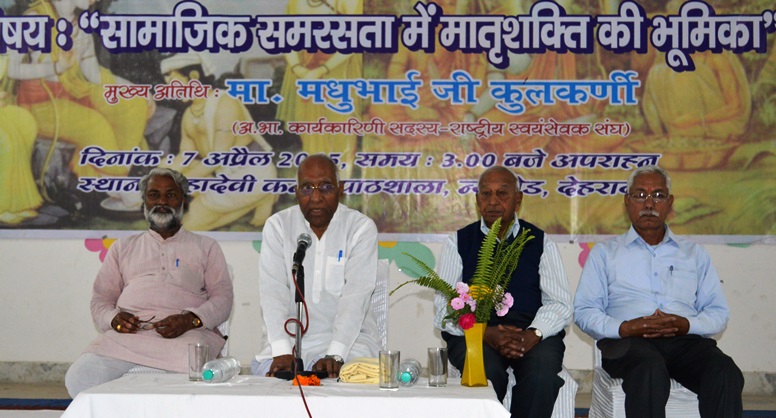