Mysuru February 01, 2015: RSS Sarasanghachalak Mohan Bhagwat inaugurated the 5th International Conference of Elders of Worlds Ancient Cultures and Traditions at the Ganapathi Sachchidananda Ashrama in Mysuru this morning. The conference is organized by International Centre for Cultural Studies, an RSS inspired organization. The conference concludes February 05, 2015. RSS Sarasanghachalak Mohan Bhagwat delivered the keynote address on the occasion. Following is an extract of his address:

“Universal Well-being, sustaining nature, culture and communities are the theme of this international conference. These words are universally accepted and also popular. But it seems that the world is yet to realize that there can be no other way unless this is universal. If one believes this, we will strive for the universal well-being. Universe consists of many things apparently but they are all inter-related. The state of one thing affects the state of every other thing in the universe. This is what our ancient traditions tell us and is also what the modern science has discovered, that everything is connected. An event at one place has its ramifications at remote places in the universe”.

The world has strived to achieve universal good through a contract scheme during the last 2000 years i.e. I benefit you only if you benefit me and if you don’t benefit me I will destroy you. When there is a contract, diversity is an inconvenience and uniformity is most favored. The living of diversity together is not on the basis of contract but on the basis of acceptance. Modern concept of life suggests that we need to tolerate each other. But our ancient traditions with vast experience said that we need to accept each other not just tolerate. Utility is not the basis for acceptance. Different traditions look different but they are one. Oneness is the absolute truth and the permanent reality. Our traditions say we need to sustain everything, accept all nature and every other traditions. “The ancient traditions of the world must have gone through the experience of living together by accepting each other. This universe is one whole organism and not different parts. Hence well-being is universal and everybody has to take care of everyone else and everything else”.

“A devotee visiting the Shri Vaishno Devi cave which is narrow, he/she cannot leave a part of their body aside and continue with the darshan. The whole body has to go along to have a darshan. Similarly, the universe is a single organism and to have universal well-being we need to co-exist as one. We need to develop the attitude of acceptance. Diversity is to be celebrated and not to be opposed. No one should be subjected to persecution and discriminated against because of their different attires or different ways of worship and dissimilar traditions. All this must co-exist together and find a way to take everybody along with us”.

“This conference is not a one-off event organized due to temporary enthusiasm. It is a continuing process where people come together to seek sustenance of ancient tradition and ways to cohabit. This is the 5thsuch conference and contacts have developed, there has been an increase in representation of various communities. Due to this enhanced participation, there is an awareness about the need to sustain ancient cultures today. We need to find ways to utilize this awakened awareness. The coming together of the ancient traditions can provide the basis for the well-being of the universe. The ancient traditions are an experience and we need to re-live this experience through acceptance and not through a contract. Our lives are not for our selfish interests. It is for the contribution towards universal well-being”.

“I exhort you all to apply your mind and translate the conclusions into deeds and seek ways to find universal well-being. I wish you all the best in your efforts in realizing this goal in this gathering of elders. I assure you of all the support of Sanathan Bharat in sustaining the ancient culture and traditions.”

Earlier on Sunday morning, An attractive procession of the delegates from the world over in their ethnic attire was held in Mysore near the Royal Palace area. It was well received by the public of the city.

Sri Ganapathi Sachchidananda Swamiji presided over the inaugural event. Shri Datta Vijayananda Swamiji also graced the dais. RSS Sarsanghachalak Mohan Ji Bhagwat delivered the keynote address. The event began on an auspicious note with the chanting of the Vedic mantra ‘Sangha Chadvam, Sangh Vadadvam….’ and lighting of the lamp by the elders of different cultures.

The welcome note was delivered by President of ICCS, Shri.Shekhar Patel. He upraised the gathering on the aim of the conference which was to discuss and deliberate on ‘Globalization, Technology and Leadership’ and its impact on the ancient cultures and traditions of the world.

Following the welcome note, Elders of these various traditions lead the gathering in prayers of their culture. They also explained the meanings of their prayers. Extract of few of those who lead the prayers is below:

Dr.Yashwant Pathak, coordinator of ICCS expressed solidarity with the sufferings of the Yazidis.

Param Pujya Ganapathi Sachchidananda Swamy Ji addressed the gathering. He said that he was happy to see people from various countries at one place. Witnessing their prayer, attire and knowing their culture was an experience he said. When people usually travel to a city, they only see a zoo, a museum or a tourist place. But people need to know the habits, culture and traditions of the local people and try to know more about them.

He also spoke about the aim of life which is the well-being of each and everyone and not simply go after personal salvation only. We should gain from each other’s experience and learn from different cultures. More such conferences should be conducted so that we get to learn from various traditions. Our native traditions and cultures are a must in today’s world to safeguard our identity.

Shri. Pradyumna, Mysore Nagar Sampark Pramukh extended the vote of thanks at the end of the inaugural session on behalf of ICCS and other organizers.

Sun Feb 1 , 2015
Ksaragod February 01, 2015: In a first of its kind, the coastal city of Kasaragod had witnessed its ever largest gathering of RSS Swayamsevaks dressed in Ganavesh (Uniform), walking with pride at the Path Sanchalan(Route-march) in streets of the northernmost town of Kerala on  Sunday evening. It was Vijayashakti Sangama, […] 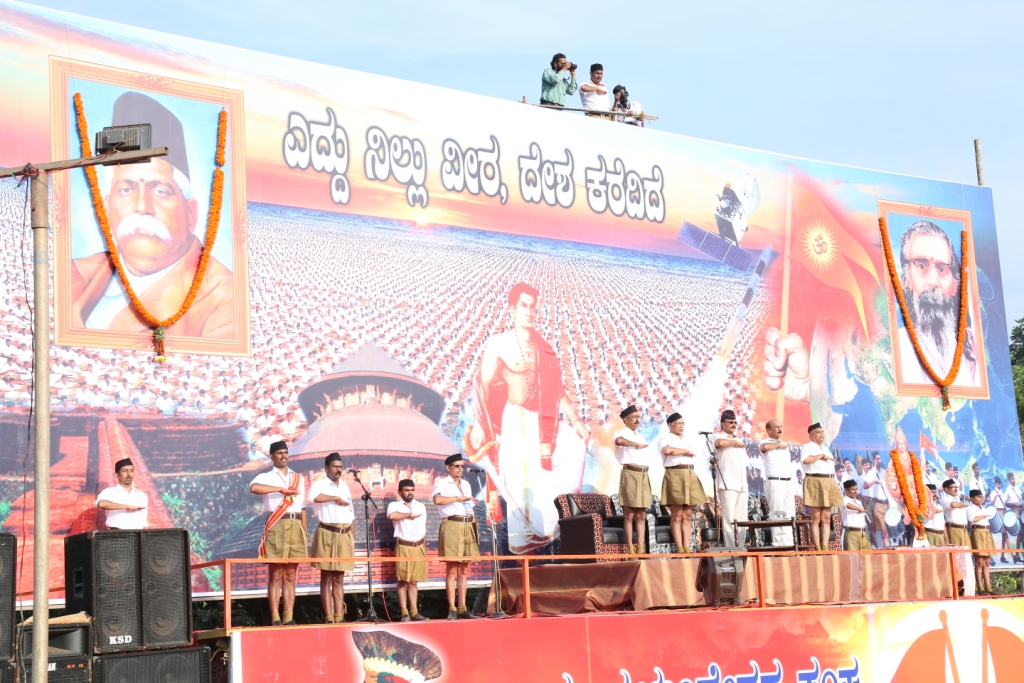