Khanwa near Bharatpur, Rajasthan Feb 20: “We are all ‘Bharat Mata Putra’ and we are living together despite different culture, caste and religion since time immemorial. Despite different religions, castes and languages, people of the country have stood as one against external aggressors as “our ancestors were one” said RSS Sarasanghachalak Mohan Bhagwat at Khanwa near Bharatpur in Rajasthan on Friday.

Khanava is the place where historic battle between Rana Saanga and Babar was held. RSS Sarasanghachalak to offered floral tribute to the statue of Rana Sanga. Taking out a leaf from history, Bhagwat highlighted the 1527 battle of Khanwa between Rana Sanga and Babar and said it was a “milestone” battle in the world.

RSS Sarasanghachalak Bhagwat was addressing the gathering after unveiling a plaque of Rana Sanga history in Khanwa.

Mohan Bhagwat said that Rana Sanga’s warrior Hasan Khan Mewati had rejected Babar’s offer to join his army and was ‘Bharat Mata Putra’. It was Rana Sanga’s other warriors like Hasan Khan Mewati who had rejected Babbar’s offer to join his army on the religious ground,” he said.
“Hasan had told that his language, caste and religion might be the same as of Babar but he was first Indian and Bharat Mata Putra (son of India),” he said.  He also appealed to the people to stay united without indulging into fight over petty issues.

Mohan Bhagwat described that the battle of Khanwa was India’s first introduction to the world that “we live in different culture, follow different religions and pray different gods but that does not make any difference.”  “We are bharat mata putra, we are ‘parampragat putra’ (traditional son) and our ancestors were one,” he said.  Criticising Babar’s war against Sanga, RSS chief said they might have built ‘Buland Darwaja’ in Sikari (Uttar Pradesh) after Sanga lost the war, but the actual monument in Khanuva is a befitting reply to it.

RSS Sarasanghachalak arrived in Bharatpur Railway station on Friday morning 7.30am, is on Rajasthan tour for 5days till Feb 24. Mon Feb 23 , 2015
Bharatpur Feb 23: RSS Sarasanghachalal Mohan Bhagwat was addressing a function in village Bajhera, 8 kilometers from Bharatpur in Rajasthan where he inaugurated ‘Mahila Sadan’ and ‘Sishu Bal Grah’ an NGO for helpless women and children. #BhagwatspeechonMotherTeresa Here is the audio file of the speech. “Mother Teresa’s service would have been good. But […] 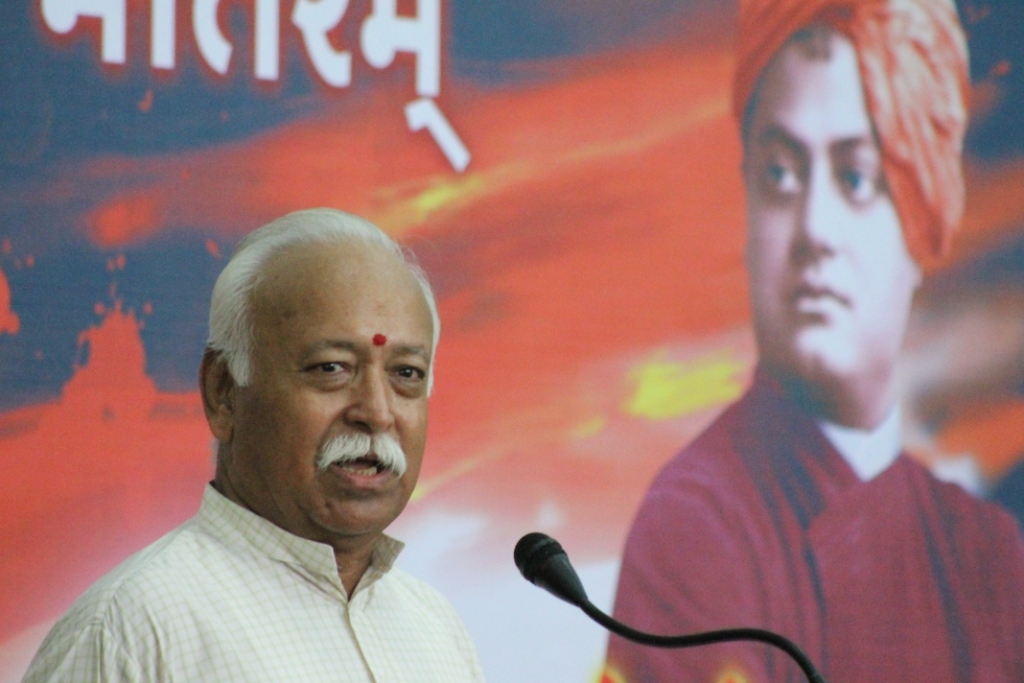