Indore, February 10, 2015 : RSS Sarasanghachalak Mohan Bhagwat stated that “Hindutva is a way of life which has a long and rich history of socio-cultural values and teachings; thus it has the power and ability to become a role model for the world at the time when every other country, religion and entity feels insecure due to the race of making money and armament”. He further states that a Hindu society can provide the guidance and enlighten the human race which faces hardships in the 21st century. Rss Sarasanghchalak Mohan Bhagwat was addressing the massive congregation of Saints and Tribals on the occasion of ‘Maa Narmada Hindu Sangam’ which took place on Tuesday at the holy bank of River Narmada in Maheshwar, near Khargone, Madhya Pradesh.

Various tribal cultural groups from across the state and other adjoining areas attended the Sangam event and showcased their rich heritage and culture through various art forms, folk songs, psalm and traditional dances.

The main motive behind organizing this event was to bring the different and large section of Hindu saints and tribals under one umbrella of ‘Sanaatan Dharm’ (ancient culture) and to celebrate the oneness of Hindutva which treats everyone on this earth with equality.

While speaking, Dr. Mohan Bhagwat also insisted on getting back to the basics of sanaatan dharma. He said, “Since ancient times, we have four gems in our society which are also the foundation of our heritage namely Sant, Pant, Mantra and Granth.”

‘We should follow the footsteps of Saints (Sant) and try to practice their teachings, messages and morals in our day to day life,” said RSS chief. Citing various simple examples, he directly made an inroad through the minds of the public and explained complex things in a simpler way.

Giving one such example, he said, that a true believer of Hinduism believes in distribution and deeds and not in the principle of collection. If we see America, capitalism comes in mind; if we see China, militarization and armaments comes in mind but when we see India, immediately a guide and a philosopher comes in mind which can show this world a path to lead the meaningful and lead by example.

With the help of example of a Lion and Elephant, he said that today we have to teach this world which only believes in strength and has gone into the depth of materialism but the Hindutva believes in Truth and not only strength. Today, world expects much more from us, said RSS Chief.

Sarsanghchalak further explained that Sanaatan dharma believes that there are different ways of pursuing your faith but we all pray to one almighty and that’s why this whole world is a one family i.e. ‘Vasudhaiv Kutumbakam’.

Hinduism does not believe in forcing others to replicate their path but at the same time believes in protecting and safeguarding its own interests and beliefs.The main problem is after years of invasion by outsiders, we have forgotten the roots to which we belong.

Dr. Bhagwat called upon the unity amongst various sections of people in India and stressed on ending the wrong practices of discrimination based on castes, creed and sects. He said, if we become one then only the day will come when the world will see India as a ‘Teacher’ and nobody will dare to harm our country.

Hindu’s should unite then only such things will become reality. Go and learn one good thing and sacrifice one bad thing in order to change yourselves from within and then only we can become the example for others.

Other notable Spiritual leaders talked about the importance of service towards the Holy Cow and Women empowerment and education. Talking about ‘Goraksha’, they said it is one of the utmost important measures which we need to take up if we want to safeguard our culture and want to flourish our sanaatan dharma. (Source: NewsBharati) 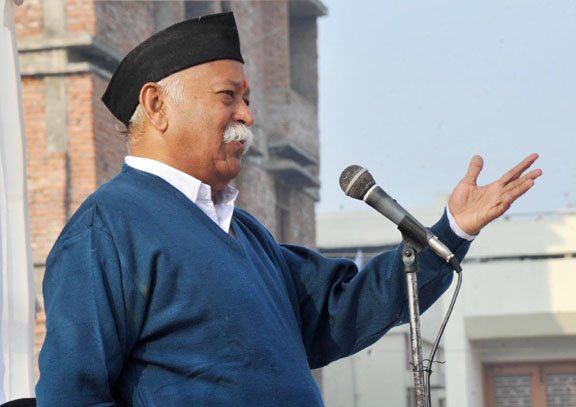