Bengaluru February 08: Virat Hindu Samajyotsava organized on the occasion of 50th anniversary of the founding of VHP was held today at the national college grounds in Bengaluru. An august assemblage of swamis and sants graced the occasion. Pejawar Matha head Shri Viveshwara Teerta swamiji, Beli Matha’s Shri Shivananda Swamiji, Madara Channayya Swamiji and many other swamijis of prominent mathas were on the dais. Nearly 1 lakh people from all sections of the society attended the Samajyotsava.

The event started with the distinguished sants and swamijs offering floral tribute to the photo of Bharat Mata. As the event began, many dharmic slogans rent the air that charged the atmosphere. Vedic chants invoking bhagawan Ganesha for removing obstacles and other mantras were rendered by a group of Vedic scholars as soon as the dignitaries graced their seats. The VHP anthem was sung next. VHP Dakshin Prant Karyadarshi (secretary) TAP Shenoy welcomed and introduced the dignitaries on the dais. All the sants and swamijis on the dais were welcomed as per Hindu tradition by garlanding them and offering a bouquet of fruits. Shri MP Puranik, President of VHP Dakshin Prant gave a brief introduction about VHP and appraised the audience on the various social service activities conducted by VHP in the recent past. He also spoke about the concerns of the lower sections of the society and the measures VHP and sangh parivar is taking too address them.

Dharmashtala Darmadhikari Shri Veerendra Hedge delivered the inaugural speech. He reminisced about the glorious past of this nation and the difficulties it faced. He said that due to our divided society, or enemies took advantage and ruled over us. But the numerous social service activities of VHP that brought various sections of the society has united the Hindu society. In its fifty years, the VHP has helped remove numerous social ills of our society. Even the Dharmashtala temple trust head taken up numerous projects to uplift the poor by providing them vocational training in many fields too help them earn and stand on their own feet. VHP aims to ameliorate the rural masses and remove the inherent differences. I wish them all the best in all their endeavors and help the Hindu society thrive.

Smt. Ramaratna, president of VHP Women wing “matru shakti”, briefed the gathering about the activities of the VHP women’s wing. She said that matru Shakti is a potent force in countering the threats facing the Hindu society, be it conversions, love jihad, untouchability and others. Educating the girls about the threats we face, how to conduct self, training in self defence and making them ready to lead the family and society with equal aplomb are the other activities of VHP Women’s Wing she said. Message from Sri Sri Shivaratreeswara Mahaswamiji was read out on the occasion as he was unable to join in person.

A unique exercise of chanting several prominent ‘Basaveshwara Vachana’s together was held on the occasion. Smt. Asha Jagadish and troupe led the chanting of the vachanas.

Beli Mathas Shivarudra Swamiji addressed the gathering next. He highlighted the noble work done by VHP in uniting the Hindu society in the last 50 years. He also said that the work done by VHP in removing the social ills has been exemplary. While we found a new identity after achieving independence, there were many challenges that faced the Hindu society. There were many forces that acted against the interests of the nation and Hindu society. Be it conversions, like the one that occurred in Meenakshipuram or terror attacks, they are happening in our country. Vishweswhara Teerhta Swamiji called for uniting the Hindu society and many accepted his call and everyone worked towards it. However, there are ills like untouchability that plague our society. We had also passed a resolution against untouchability, yet we are even today discussing about it as it is still in practice. Our resolutions should not remain mere slogans but should be implemented to bring about change in our society. If each of us are awake of these ills and threats to our society, we will be able to address the challenges facing us.

Today, we are taking away the opportunity from our kids to learn in their own mother tongue. We are also unable to impart value based education to our kids. Even the glory of our past cannot be taught to them. Whenever such syllabus is introduced in schools, it is deemed as saffronization and not allowed to continue. VHP’s work of addressing these lacunas is exemplary. Some say that there is confusion as who is a Hindu. There need not be any confusion as it has already been known that anyone residing within this land of Bharat is a Hindu. Our Guruji (former RSS Sarsanghachalak) has made this clear in his ‘Chintana Ganga’. Let us work together to address the challenges facing our society along with VHP. On this momentous occasion of the 50th anniversary of VHP, I wish them all the best in all their future projects.

RSS Sarkaryavaha Shri Suresh Bhayyaji Joshi delivered his presidential address next. Following is the extract of this address.

“I offer my humble pranams to the sants and swamijis and the Hindu force present here. It is indeed a boon to be born in this land as a Hindu. This is a sacred land. This land has seen many ups and downs and has witnessed many attacks and . But the Hindu society has only thrived and not buckled. It is the task of each and every one of us to see that this tradition continues. This is the only land for the Hindus. No Hindu without Bharat and No Bharat without Hindus .

There are many ills within the Hindu society. We need to end these ills together and worked towards a harmonious Hindu society. Ills like untouchability have to be ended as it only weakens our society. Along with the feeling of caste, regionalism is a threat to our nation. The feeling that I belong to this region or that region, I am of this caste or that caste will only weaken us from within.

Hindus never invade any other country. The notion of ‘vasudaiva kutumbakam’, that this whole world is one, is the message of our sacred texts.While the famous adage said, ‘Bahujana hitaya, bahujana sukhaya’ (good for many, happiness of many), we said ‘sarvajana Hitaya, Sarvajana Sukhaya’ (good for all, happiness of all) is what a Hindu wants for the society.

Swami Vivekananda said that if ‘dharma’ sustains in Bharat, ‘dharma’ will remain in the world. This is the responsibility of Hindus to convey hope for this world. Let us work towards a harmonious world together. ”

Madara Channayya Swamiji spoke next. He stressed on Gau Hatya and said that we need to understand the nuances of the way Dalit society views Gau Hatya and why they were not aware of the importance of cow protection. “This was due to the way they lived for centuries in forest without having any opportunity to rear cattle in the traditional way. He quoted the instance of how Guruji Golwalkar impressed upon the Puri Shankaracharaya to take the task of educating the dalits of Orissa on the importance of cattle protection and enable them to rear cattle and thereby understand its importance. Though there are many challenges that we are facing, the ills like untouchability should be ended first. Today, ‘Ghar Wapasi’ is being discussed. We need to understand as to why many dalits converted. While ‘Ghar Wapasi’ is ideal, we need to ensure that they are taken care of well, when they come back and the same abhorrent practices are not practiced. Today, there is violence in many parts of the world due to religious extremism which has also divided the people. But in India too few bad practices have created rift in our society. We all, both Dalits and non-dalits have to come together to end this practice of untouchability. The unity of Hindus will come true and all dalits will stand for the protection of our society when the differences are addressed.

I have discussed with Suresh Bhayyaji Joshi at Nagpur on the ways to end the practice of untouchability. I end my talk by hoping that we will see a society that is devoid of its ills and differences.” Shri.Gopal Ji, VHP’s Dakshin Prant Organizing Secretary addressed the gathering next. He said that the state government has taken away the right of free speech of Togadia Ji by disallowing him to come to this event.

Gopal ji said, “An Owaisi, who claims to remove Hindus in 15 mins is allowed to speak in Bidar. The government has not taken any action yet on the culprits who raped and killed a girl in Theerthahalli. The government is trying to take over our mathas and temples. This anti-Hindu stance of the state government is shameful and we condemn it.

VHP is striving to work towards the uplifting the Hindu society. VHP is involved in several social service projects that are for the good of the society. Hindu society was being converted for the last 1000 years. However today, we see Hindus are still being converted through various means and being used in anti-national activities. Hence VHP is resolved to continue Ghar Wapasi and bring back those Hindus who wish to come back to their parent religion. Swami Vivekananda said that a Hindu who converts to Islam or Christianity is one enemy more.  Moreover, there are many Muslims and Christians who have expressed their intent to come back to Hindusim. Hence, Ghar Wapasi is a need of the hour and VHP is determined to continue it.

Hindu society too had its ills like untouchability which enabled many to convert. VHP understood this fact and worked towards removing this ill. We need to accept them with open arms and Ghar Wapasi will be successful.

We need to be practicing Hindus and there should be no differences in caste or income. We are all Hindus and we should work towards uniting the entire Hindu society.”

Finally, Vishveshwara Samiji spoke on the occasion. He said that though conversions of Hindus have been taking place for centuries, our politicians remained silent. Re-converting them back to Hindusim is seen as a crime.

“I ask if conversion is not a crime why is re-converting seen as a crime. I have not yet received a favorable reply to this question. Conversion should be completely stopped. I condemn the appeasement politics of the government which has one law for Hindus and another law for minorities.

Conversions can’t be completely blamed on other religions. Hindu society too has few ills like untouchability that enabled many people to convert to other religions. It is our responsibility to see that there is a conducive atmosphere for the Dalits in our Hindu society. While even Muslims and Christians are not seen as untouchables, a section of our own society are deemed as untouchables. This is not acceptable. Dalits are on par with anyone else in the Hindu society. VHP is working towards a harmonious Hindu society by bringing everyone together. Many intellectuals say that VHP is anti-Dalit but this is not true. VHP is infact, working closely with both Dalits and others to remove the differences and doing a yeoman service.

Hindu society has to be strong to face its challenges. VHP is working towards this. Just as Krishna drove Arjuna as a Charioteer in the Mahabharata war, VHP is the chariot and you are the Arjunas. The sants and swamijis will drive this noble work of VHP. Let us see to it that no one is left aside in our society and let us resolve to build a string Hindu society.”

The event ended with Shri. Krishnamurthy delivering the  vote of thanks. 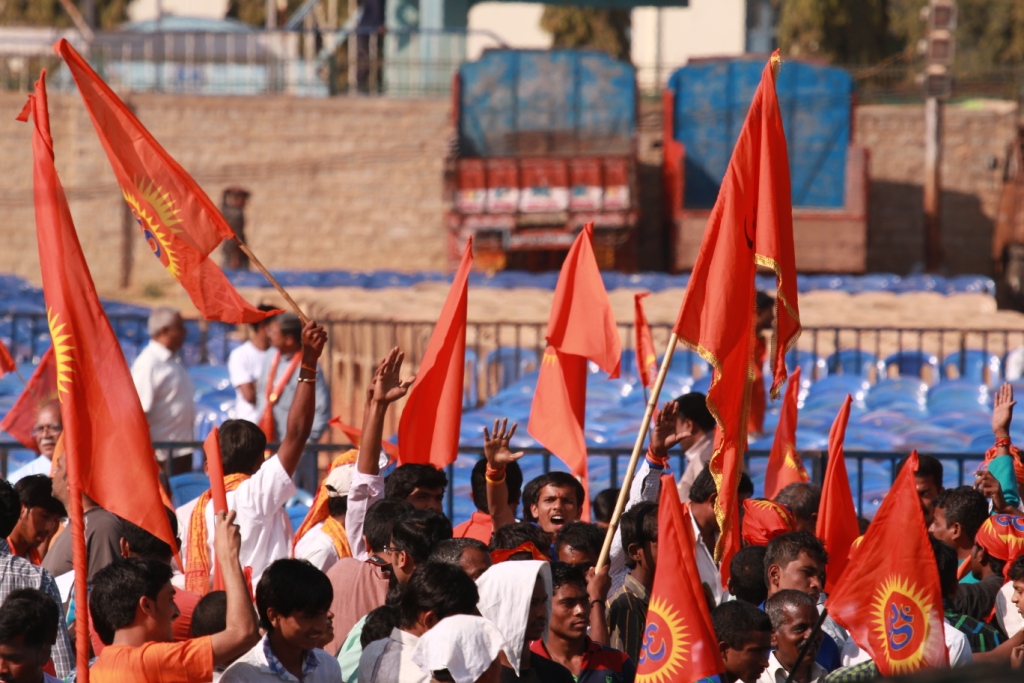