Chennai September 20: RSS Sarakaryavah Suresh Bhaiyyaji Joshi inaugurated a two-day for select columnists of South India at Chennai on Saturday morning.  The 2-day  conclave organised by Prachar Vibagh RSS was attended by more than 80 columnists from 5 Southern states of India.

The meet  concluded on Sunday evening.

“A self-aware, organised and active society is the remedy for all the misconceptions in the society: Bhayyaji Joshi

A two day seminar was held on secularism for columnists in Chennai, Tamil Nadu on September 19th and 20th. The event, organised by Prachar Vibagh of RSS was inaugurated by Sri Suresh ‘Bhaiyyaji’ Joshi (Sarkaryavah, All India General Secretary of RSS) on 19th September and attended by more than 80 columnists from Southern states of India.

Dr. Manmohan Vaidya, while summarising the deliberations wondered, why the word ‘Secularism’ was included in the Preamble of our Constitution during the dark period of emergency. The constitution makers discussed and deliberated on this point in detail and decided that it was not necessary to include the same. He requested the legal luminaries and political experts to ponder over this issue and to see whether the intention was to initiate divisive communal politics in our country.

Sri Bhiyyaji Joshi delivered the valedictory address today. He spoke about the confusions that prevail in the society such as the name of the nation (India Vs Bharat), Country Vs State Vs Nation, Citizen Vs National, Patriot Vs Friend of nation, Anti-national Vs Enemy of the nation, Invader Vs Native Ruler etc. Many of these confusions were infused by people with divisive interests including British and shallow political discourse. Current day democratic set up assumes to have absolute right over the public discourse which was not the case in pre-independent Indian society. There was a clear distinction between the rights and responsibilities of both the ruler and society. The same is needed now, for example government can impart education while the character building has to be done by the society.

He also said that a secular state should not allow any sects or community to infringe upon the rights of other sects or communities. However, in Bharat today, the religious minorities are given preferential treatment. For example in Nagaland, Mizoram and Kashmir though the minority community is in majority, they enjoy all the privileges available to minorities. He concluded saying that a democracy is only successful if the people are self-aware, organised and active. After the inaugural, the key note speech was delivered by Dr Manmohan Vaidya Akhil Bharatiya Prachar Pramukh of RSS. Dr. Vaidya dwelt upon the origin of secularism from the West and how it has been twisted in the Indian context. He described that secularism evolved along the themes of separation of the Church and State in Europe and how since India doesn’t have a history of theocratic states, the concept of secularism is irrelevant in the Indian context. He also touched upon the historical constitutional debate between Sri K T Shah and Dr. Ambedkar, describing how Dr Ambedkar was against inclusion of the word.  Secular in the preamble of Indian Constitution as he felt India was naturally a secular society. He spoke in detail about the evolution of the concept of the Indian National Flag. Quoting the discussions of the Flag committee (constituted by Congress Working Committee in 1931), he explained how the stalwarts of the committee felt that representing different religions as colours of the national flag was in itself a communal thought and how the committee agreed that the Saffron flag with a blue Charka would be the best representation of the Indian ethos. He concluded stating that the perversion of the concept of secularism in India has resulted in the terming of nationalists as Communal and people with communal thinking being hailed as secular. He conveyed that the Bharatiya tradition has from time immemorial regarded all faiths and sects as one and that the artificial injection of secularism is not needed in a society as hospitable and assimilative as Hindu society.
Eminent personalities such as Sri Balbir Punj (Vice President of BJP), Sri Prafulla Ketkar (Editor of Organiser), Sri N K Singh (Senior Journalist), Smt. Madhavi  Diwan (Senior Advocate, Supreme Court) and Sri K G Suresh (Editorial Advisor, Doordarshan) presented their views on various aspects of Secularism within their respective domains such as politics, media and constitutional law. Mon Sep 21 , 2015
On the occasion of Birth Centenary Year of Pandit Deendayal Upadhyaya, the Sarasanghachalak of RSS Dr Mohan Bhagwat had a frank conversation with Prafulla Ketkar, Editor, Organiser and Hitesh Shankar, Editor, Panchjanya about this committed Swayamsevak and Pracharak, and relevance of his thinking propounded in the form of Integral Humanism. Pandit […] 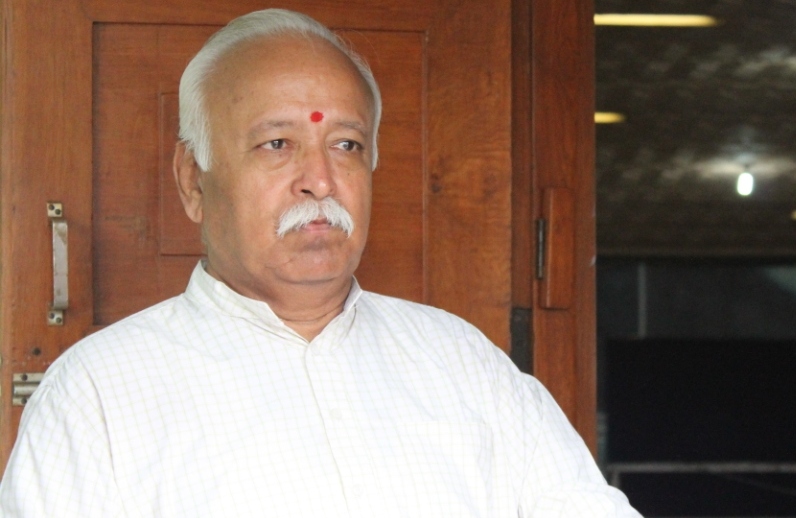