India’s Well-known monument India Gate will be illuminated in orange and messages of ending violence against women will be displayed on panel boards in two high-traffic lines of the Delhi Metro as part of the UN’s ‘Orange the World’ campaign that includes parades, soccer matches, school debates and the lighting up of hundreds of iconic monuments. Hundreds of monuments across the world that will be illuminated as part of a UN effort to galvanise support for global action to end violence against women and girls.

The 16 Days of Activism Against Gender-Based Violence is an international campaign which takes place each year and runs from 25 November (International Day for the Elimination of Violence against Women) to 10 December (Human Rights Day), also encompassing other important key dates. Widely known as the ‘16 Days Campaign’, it is used as an organizing strategy by individuals and organizations around the world to call for the prevention and elimination of violence against women and girls.

It was originated by the first Women’s Global Leadership Institute in 1991 and is coordinated by the Center for Women’s Global Leadership. In support of this civil society initiative, each year, the United Nations Secretary-General’s campaign UNiTE to End Violence against Women calls for global action to increase worldwide awareness and create opportunities for discussion about challenges and solutions. In 2014, the UNiTE campaign called on governments, UN entities, civil society organizations and individuals across the world to ‘orange their neighbourhoods’ to raise public awareness about the issue of violence against women and girls. As one of the official colours of the UNiTE campaign symbolizing a brighter future and a world free from violence against women and girls, the colour orange was once again a uniting theme throughout all events. The initiative called on all people in all parts of world to take action in their communities, play their part and stand up against violence against women and girls.

“Orange the World: End Violence against Women and Girls” This year is a critical juncture for global efforts to prevent and end violence against women and girls. It marks the 20th anniversary of the Beijing Declaration and Platform for Action (BDPfA), the most progressive blueprint ever for advancing women’s rights. Also, as a new global development framework, the Sustainable Development Goals, comes into force in September, now is a crucial time to advocate to ensure that violence against women and girls is high on political and public agendas, prominently placed within the new global development framework, and prioritized in its implementation.

In 1995, violence against women was highlighted as one of twelve critical areas of concern in the BDPfA but the UN Secretary-General’s report on Beijing Implementation presented twenty years later and relevant national reviews show that despite progress, levels of violence against women and girls remain unacceptably high worldwide. Slow and uneven implementation of national and legal frameworks, the insufficient attention paid to the prevention of the occurrence of violence, and persistent discrimination, gender inequality, discriminatory norms and gender stereotypes remain major obstacles to eliminating violence against women and girls.

Last year, as part of the initiative ‘Orange Your Neighbourhood: End Violence against Women’, ‘orange’ activities were organized in more than 70 countries around the world and more than 100 million people were reached through social media sparking a global conversation, new commitments and initiatives. To raise global awareness, we oranged iconic buildings around the world including the Empire State Building and the United Nations Headquarters Building in New York City, the administration building of the Panama Canal and the Sphinx and Pyramids at Giza in Egypt. This year, we want the initiative to be even bigger and much, much brighter, bringing the message of zero tolerance for violence against women and girls to new communities, spaces and audiences. JOIN US – keep the world orange throughout the 16 Days! Please find below some ideas and guidance to assist your planning: 1. Engage your government!

“Violence against women and girls remains one of the most serious –- and the most tolerated -– human rights violations,” said UN Under Secretary-General and UN Women Executive Director Phumzile Mlambo-Ngcuka in a statement.

“It is both a cause and a consequence of gender inequality and discrimination. Its continued presence is one of the clearest markers of societies out of balance and we are determined to change that,” she said.

The colour orange, which has come to symbolise a bright and optimistic future free from violence against = women and girls, will help unify the large-scale social mobilisation.

It will be carried out during the civil society-driven ’16 Days of Activism against Gender-Based Violence’, which will run from today commemorated as the International Day for the Elimination of Violence against Women until Human Rights Day on 10 December.

Globally, during the fortnight under the ‘Orange the world’ call, over 450 events are planned in more than 70 countries throughout the 16 days. They include the lighting of major monuments and numerous activities involving civil society such as dialogue sessions with faith-based leaders, film screenings, theatre and dance performances, rallies, marches, marathons and digital activism via social media platforms.

Events will include the orange lighting of major landmarks including the Niagara Falls (Canada/USA), the European Commission building (Belgium) and Council of Europe building (France), the Little Mermaid statue in Copenhagen (Denmark), the archaeological ruins at Petra (Jordan), and the Palais de Justice (Democratic Republic of the Congo).

Mon Nov 30 , 2015
Chintamani, Karnataka Nov 29: Rashtra Sevika Samiti had organised YUVATI SAMMELAN at Chintamani, in which Nearly 115 women participated. The program began with lighting of the lamp followed by the keynote speech from Aruna Thakhar – Karnataka Dakshina Pranth Karyavaahika (Organizing Secretary of Karnataka South). There was a session on […] 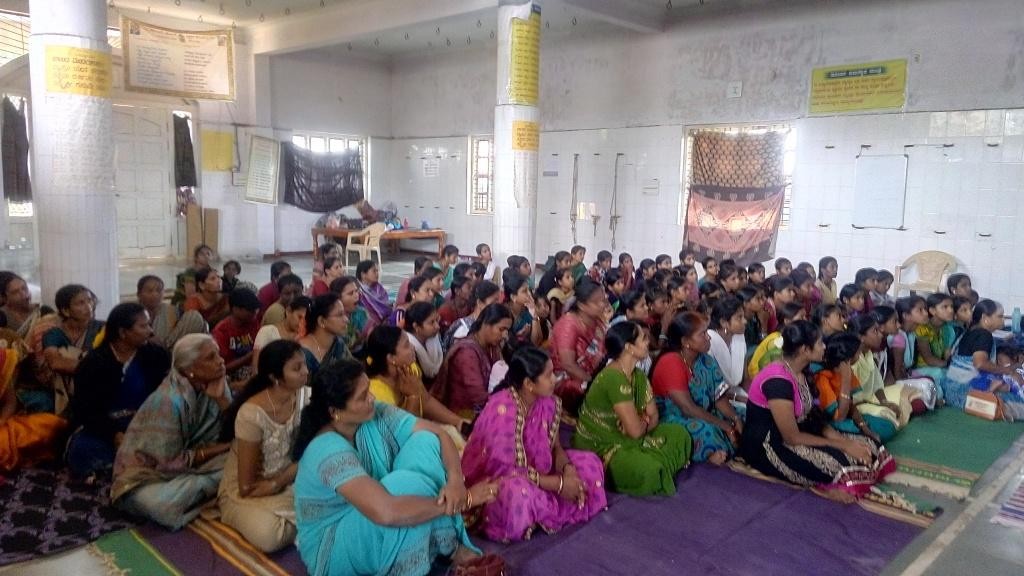