India scored 300/7 after opting to bat first after winning the toss. Virat Kohli’s 107 was the main highlight as he took on Pakistani bowlers with aggression. Defending the total, pace bowler Mohammad Shami claimed four wickets to ensure India maintain their blemish-free against their rivals in World Cups. Pakistan were all-out for 224, India won by 76 runs.

RSS Sah-sarakaryavah Dattatreya Hosabale congratulated Team India on the inspiring win. Dattatreya Hosabale in his brief congratulatory message to www.samvada.org , said “The team India has made it again. I join the countrymen in congratulating them. Every match with Pakistan is filled with national fervour. Today the nation celebrates the victory with pride”.

“Congrats Team India. Well played. We are all very proud of you,” tweeted PM Modi. He had earlier wished his best to every member of the team ahead of the first Pool B match. Modi had also called his Pakistani counterpart Nawaz Sharif on the eve of the match to extend his wishes for a good game of cricket.

Pakistan will have to wait for another four years to burst the crackers. On Sunday, their hopes of creating history by beating India in a World Cup match were dashed as Mahendra Singh Dhoni’s men sealed a 76-run victory. 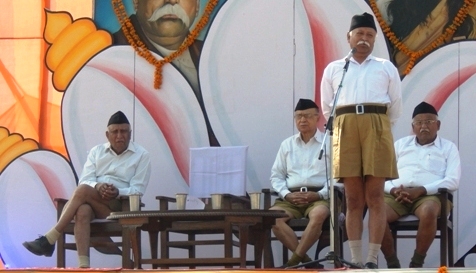