Puttur January 17: “No question of stopping Ghar Vapasi for whatever reasons. Efforts are made only to bring the converted Hindus back to their mother religion. If you don’t like conversion, bring the anti conversion law. Let Hindu Constitution be implemented in our country” said Dr Pravin Togadia International President of Vishva Hindu Parishat declared firmly while delivering the speech at Viraat Hindu Hrudaya Sangama in Puttur in Karnataka on Friday, Janaury 16, 2015. The Virat Hindu Sangama was organized in the ground opposite to Putturu Shri Mahaligeshwara Temple as part of golden jubilee year celebration of Vishva Hindu Parishat.

All our efforts are towards bringing back those converted Hindus to mother religion. No need of making big hue and cry about this now. Because, no one opened their mouth while conversion was happening. India was a Hindu Nation 2000 years back. But later on due to conversion our country lost its Hindu identity.  A time came when people were afraid to call themselves Hindus. But this situation will not continue further. For our better future all Hindus should come together. – said Dr Togadia. Implementing Hindu Constitution is our goal

While speaking about the efforts made by of VHP for Hindu cause he said – Akhanda Bharata got broken into many; The Hindus in Kashmir are being continuously targeted to violence. Already Muslims of Kashmir valley made lakhs of Hindus to run away from their land. We have to rehabilitate them and make them settle in Kashmir. Vishva Hindu Parishat is working towards Hindu cause since past fifty years. VHP has undertaken more than 2 lakhs Seva activities during last fifty years. Construction of Ram Mandir, implementation of Hindu constitution is our goal. We will hoist Bhagava dhvaj in Lahore on day in future.

Is Aurangajeb’s rule is there in Karnataka?

Questioning the motive of Karnataka State Government in bringing law to take control of Mutts he told – During olden days when India was prosperous the likes of Aurangjeb have looted the worship places of Hindus like temples and mutts. Now the State Government is trying to take the Hindu Mutts and Temples into its control. Has the Aurungje’s rule come back in the State? This should never be allowed.

Security of India should be on high priority

We have to strive to make India a strong Hindu Nation. For that we have to follow three formulas; Always be ready to protect the security and dignity of the country. For this we have support Ghar vaapasi. We have to decide to strongly oppose acts like love jehad and other illegal acts and support common civil code.  Jehadi activity is running in various forms in the country- love jehad, property jehad, bomb jehad, economic jehad and many more type of jehadi activates are going on to destroy our country. We have to resolve to stand firmly against all these evils. RSS mega Youth Gathering 'PARIVARTANA SAMAVESH' to be held on Feb 1, 2015 at Shivamogga 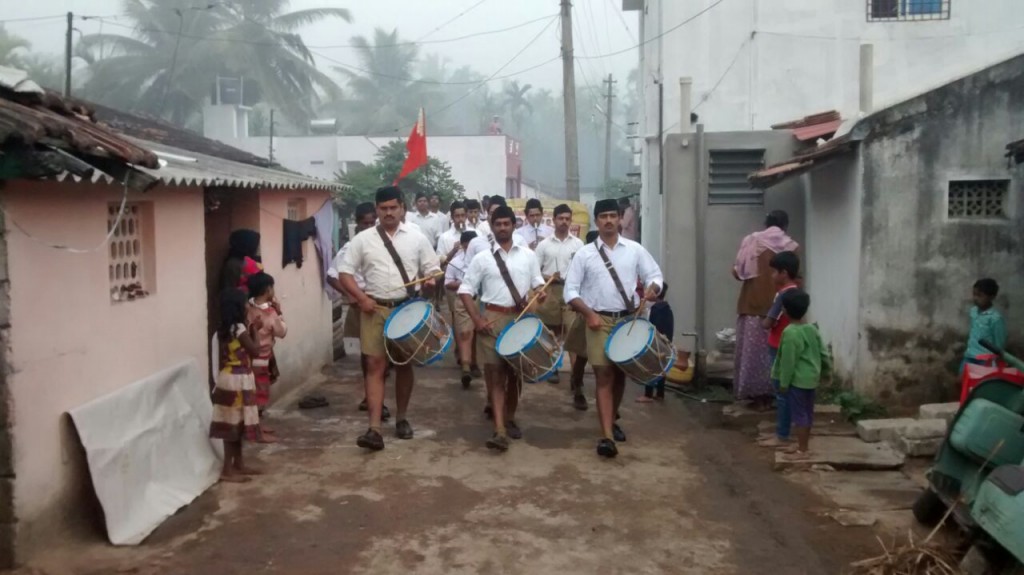