Bengaluru December 9: Aimed to showcase service activities of Hindu religious organisations of Karnataka, 5-day mega HINDU SPIRITUAL and SERVICE FAIR was inaugurated by Governor of Karnataka Vajubhai Vala along with Swamijis of various Math on Wednesday evening at National College Grounds in Basavanagudi Bengaluru. The fair will be concluded on Sunday December 13.

Organised by Hindu Spiritual and Service Foundation, Bengaluru HINDU SPIRITUAL and SERVICEIR is first of its kind in Karnataka.

Eminent economist S Gurumurthy in his key note address said “Charity in India is very common factor in life of an individual. Charity does not need an institution in India. Each Indian has a basic mindset to serve. A study says Poor people serve more. Housewife serves greatly through family values; she always keeps an extra amount of food at her house for the needy. Hence charity is a practice in India. Governments also partnering the Hindu Spiritual and Service fair at Tamilnadu’s Chennai, Rajasthan’s Jaipur, and also here in Bengaluru.”

Speaking on the occasion Governor Vajubhai Vala said, “Namaste Sada Vatsale Mathrubhoomi. Worshipping the motherland is one of the basic duties. Sarv Dharma Samabhav and Vasudhaiva Kutumbakam is the core concept of this culture. As a Karyakarta .Humanism is needed to make a human complete. Our old saying narrates Sarve Bhavantu Sukhina and also Work is Worship. In Bhagavadgita Lord Krishna said Paritraanaya Sadhoonam, Vinashaayacha dushkrutam. It says we need to protect the people who do good things and meanwhile the culprits should be punished with utmost punishment what they deserve. Protecting the values of culture and Dharma is itself protecting the nation. Let’s pledge for working for the society”. Gangadharendra Saraswati Swamiji of Swarnavalli Math stressed on understanding and preserving the ecology. The world is discussing the changes in the environment including global warming. We need to focus on using rain water on harvesting set up and also adapting solar plants at the household level. Swamiji stressed on adding the word spiritualism in Indian constitution. He also said, ‘before making any legislature on Hindu religious institutes, Government should have a prior discussion with religious heads of various Hindu institutes of the state.’

More than 200 major Socio-religious service organisations are taking part in this fair; showcase the service activities being run by them.

Earlier on Wednesday, a unique event Matruvandana held in which nearly 2000 mothers were offered with Vandana (honouring) by 2000 school students of Bengaluru. The event received massive public applause.

RSS Kshetreeya Sanghachalak V Nagaraj addressed in a seminar held on the occasion, spoke on “Temples as centres of Social Transformation”, was attended a select audience.

In the evening, Bharatotsav, an amalof Indian Dances with emphasis on Karnataka folk legacy was held by Sneha Kappanna and troupe. 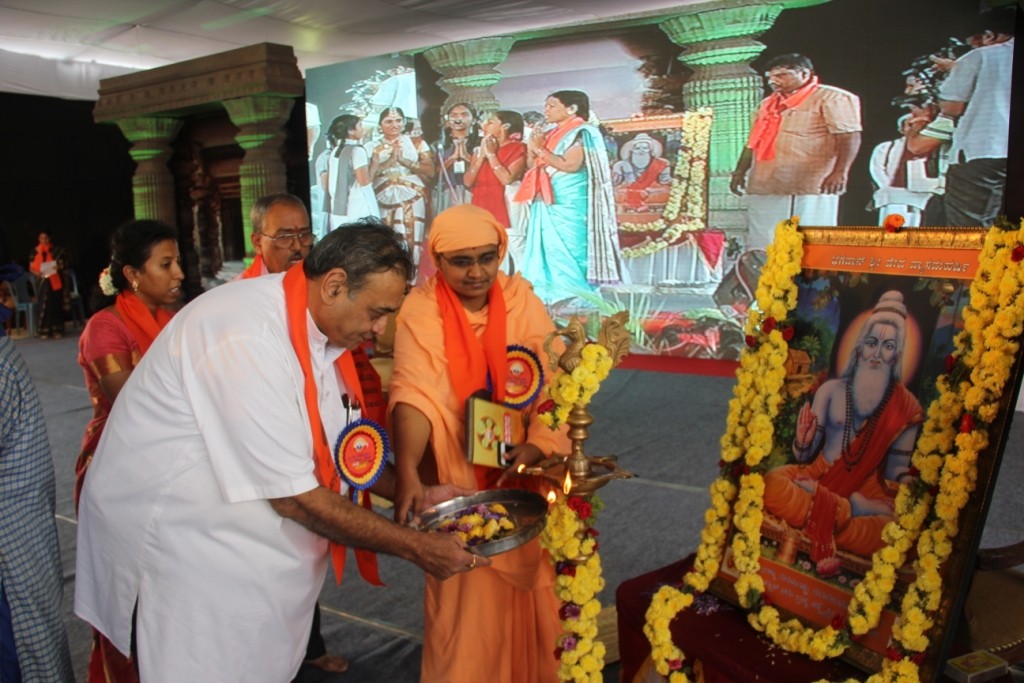