His was the divine presence where one could lay bear the conflicts and angst of one’s mind; a platform where one could relieve himself of his burden. His patience to listen and competence made him the Mahameru of love and affection; gave him the virtuous sanctity of the waters of the sacred Ganga; made him the nectarine Gita that got one rid of one’s delusion.
There were umpteen instances where I was about to fall by the wayside tired and weighed down by the pressure of circumstances, and  a phone call from him, a momentary interaction with him at some railway platform, a walk with him during his morning walk, was suffice to reinvigorate my sagging spirits.

When I was working in Thiruvananthapuram as a Pracharak, the wanton police against the procession of the workers of the Akhil Bharatiya Vidyarthi Parishad, and the consequent unhappy incidents, indiscriminate arrests made by the police, the raid conducted by the police at the Sangh Karyalaya, and the difficulty faced in getting the arrested students enlarged on bail, had virtually brought me to my wits end and I was feeling desperate. At this critical moment I got a telephone call from Krishnappaji, who was at that time Kshetra Pracharak of Dakshin-Madhya Kshetra, comprising Karnataka and Andhra Pradesh. He did not speak much but only said: “Problems are bound to come in an unending stream, but remaining a part of them, you will never be able to either think or work in a peaceful manner. Free yourself of the problems and your intellect will regain its clarity and you will be able to think and act objectively.” These were the words that might have been heard and read many a time. But the moment he uttered these words, all my mental tension just evaporated. That is, these words, when came from him, had a magical effect that could rid my mind of the dense darkness of all conflict.
It is his words aglow with virtuous purity that strengthen the conviction that the Sangh works for the spiritual sadhana of the highest standards. And it was precisely for this reason that the workers used to come in hordes to meet him. It was not merely organisational matters; he used to find solution to the intricate individual life problems of people. And so, from ordinary swayamsevaks to elderly workers of the Sangh used to approach him for guidance and succour. Even big industrialists and technocrats of repute used come to him for advice.
Krishnappaji’s approach to organisational work was all-comprehensive. He intimately knew the workers active in every nook and cranny. His life was exemplary not only to ordinary Sangh workers but even to Sangh Pracharaks. He was the originator of some beautiful basic concepts regarding the practical aspects of the Sangh work and the method of their application.
There is an incident that is still fresh in my memory. Once a baithak of Sangh workers was in session. When the details of the persons expected to attend the meeting were worked out, it was found some were absent. “When you return to your places, what are you going to tell those who have not come for the the baithak” asked Krishnappaji. Then he gave the reply also: “You just inform them about the discussions and decisions that have been made. Never ask them to explain their absence.” This may be a small incident. However, it gives us a practical lesson that our approach in everything should be positive.
To adopt novel ideas and finding ways and means to put them into practice was Krishnappaji’s specialty. When I was Vibhag Pracharak of Thiruvananthapuram, myself, along with the present Mahanagar Sanghachalak, Girishji, had started an English magazine named Sentinal. Krishnappaji made a suggestion as to why not the English name, ‘Sentinal’, be replaced with a Bharatiya word? For us, more than a correction, it was a great lesson. It is worth recalling here that the name of English monthly in Karnataka, started under the guidance of Krishnappaji, is Aseema.
He, who lived amongst us as the will-power in human form, was relentlessly fighting cancer, a synonym for death, for over 30 years and more. It will be difficult to find someone like him who lived a fully active and purposeful life even when death was lurking behind him very closely. His life was as pure and as the drop of holy water. He spread light of purity all around through his thoughts, words and deeds. And anyone who had the good fortune of coming into his contact, even once, will realise this truth.

(The above article has been published in ORGANISER, August 23, 2105 Issue)

One thought on “‘Krishnappaji – a Mahameru of love and affection’; writes J Nandakumar”

KREEDOTSAVA held at Sanghaniketan in Mangaluru, 1012 swayamsevaks from 89 Shakhas participated

Sun Aug 23 , 2015
Mangaluru August 23, 2105: As a part of annual Sri Krishnajanmashtami Celebrations, KREEDOTSAVA held at Sanghaniketan, RSS Zonal Headquarters in Mangaluru. A total of 1012 Swayamsevaks from 89 RSS Shakhas participated in this Kreedotsav in which variety of sports and games held including Kabaddi and other events. Krishnashtami will be celebrated on […] 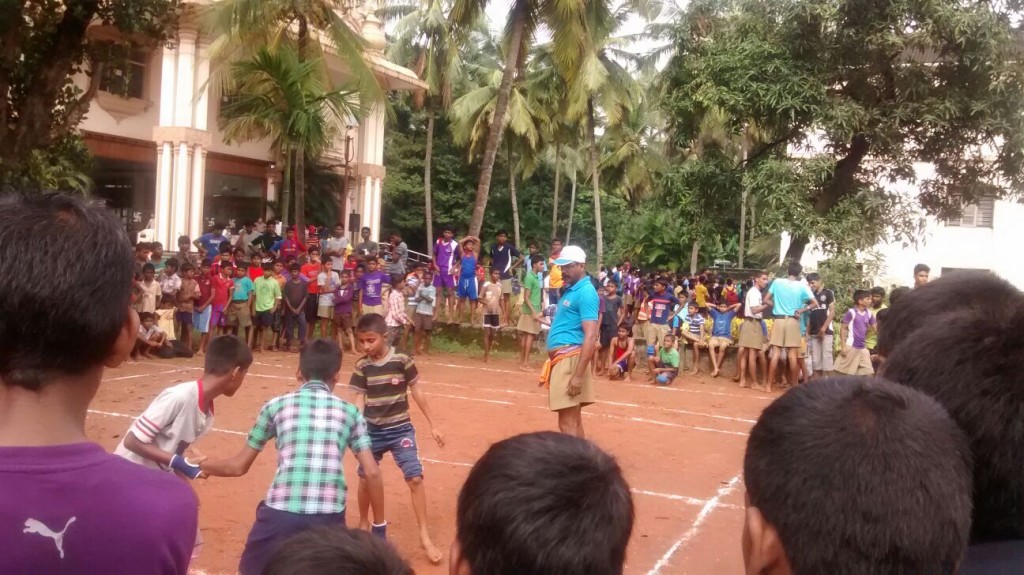