SHILLONG July 27:  Former President APJ Abdul Kalam passed away on Monday  evening at a hospital in Meghalaya, where he had gone to deliver a lecture at the Indian Institute of Management in Shillong. He was 83. Dr Kalam reportedly collapsed on stage at the IIM in Shillong and was rushed to hospital.

“The great Rishi of our times who infused in us the courage to think different, to invent, to discover the impossible, to combat the problems and succeed, is no more with us. Those wings made out of fire might have ceased it flapping but the minds which were ignited from that fire would glow for ever” said RSS Akhil Bharatiya Sah Prachar Pramukh J Nandakumar in his condolence message.

He was the 11th President on India between 2002 and 2007. Doctors say he suffered from a cardiac arrest. Dr Kalam was born in Rameswaram on October 15, 1931, to a boatman. He played a pivotal role in India’s Pokhran-II nuclear test in 1998, the first since the test by India in 1974. He was known as the missile man of India.

For his achievements, he was awarded the Bharat Ratna, and then he became the 11th President of India in 2002.

Kalam was born and raised in Rameswaram, Tamil Nadu and studied physics and aerospace engineering. He spent the next four decades as a scientist and science administrator, mainly at the Defence Research and Development Organisation (DRDO) and Indian Space Research Organisation (ISRO) and was intimately involved in the India’s civilian space program and military missile development efforts. He thus came to be known as the Missile Man of India for his work on the development of ballistic missile and launch vehicle technology. He also played a pivotal organizational, technical and political role in India’s Pokhran-II nuclear tests in 1998, the first since the original nuclear test by India in 1974.

In 2002, Kalam was elected the President of India in 2002 with the support of the both the ruling Bharatiya Janata Party and the opposition Indian National Congress. After serving a term of 5 years, he returned to civilian life of education, writing, and public service. He has received several prestigious awards, including the Bharat Ratna, India’s highest civilian honor.

Early Life: Avul Pakir Jainulabdeen Abdul Kalam was born on 15 October 1931 in a Tamil Muslim family to Jainulabudeen, a boat owner and Ashiamma, a housewife, at Rameswaram, Ramanathapuram District, located in the Indian state of Tamil Nadu. He came from a poor background and started working at an early age to supplement his family’s income. After completing school, Kalam distributed newspapers to financially contribute to his father’s income. In his school years, he had average grades, but was described as a bright and hardworking student who had a strong desire to learn and spend hours on his studies, especially mathematics. He was just a simple man with a great fierceful heart in his childhood  After completing his school education at the Ramanathapuram Schwartz Matriculation School, Kalam went on to attend Saint Joseph’s College, Tiruchirappalli, then affiliated with the University of Madras, from where he graduated in physics in 1954. Towards the end of the course, he was not enthusiastic about the subject and would later regret the four years he studied it. He then moved to Madras in 1955 to study aerospace engineering. While Kalam was working on a senior class project, the Dean was dissatisfied with the lack of progress and threatened revoking his scholarship unless the project was finished within the next three days. He worked tirelessly on his project and met the deadline, impressing the Dean who later said, “I [Dean] was putting you [Kalam] under stress and asking you to meet a difficult deadline”. He narrowly missed achieving his dream of becoming a fighter pilot, as he placed ninth in qualifiers, and only eight positions were available in the IAF.

After graduating from Madras Institute of Technology (MIT – Chennai) in 1960, Kalam joined Aeronautical Development Establishment of Defence Research and Development Organisation (DRDO) as a scientist. Kalam started his career by designing a small helic 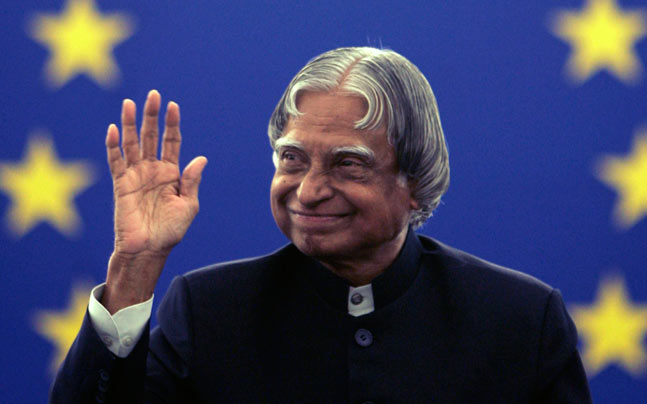