Hundreds paid emotional obeisance to senior Pracharak Shri.Nagbhushan Bhagwat today in Bengaluru. In a public event organized at the Vasavi Convention centre in Basavanagudi, Bengaluru, shraddanjali was paid to the departed senior Pracharak by public and prominent people of the society.

Senior Pracharak Suryanarayan Rao Ji addressing on the occasion, said “When I spoke last year during the anniversary of Shri Yadava Rao Joshi on Ananta Chaturdashi day, I never expected that I will come back to speak again on this sad occasion like this. I have been a witness to him and his work for last several decades and I can say that whichever quality of Shri. Nagbhushan everyone reminisced earlier, I can vouch that it is true to the last letter.

Chanakya had said that most people show concern about the country but it remains only in words. Swami Vivekananda too said the same. Doctor Ji perceived this problem and took up the task of getting such concerned individuals together and work for the sake of the nation. He thus set on the task of getting noble people together and creating Karmayogis such as Nagbhushan Ji. As Sant Tukaram said, I may not wish for Moksha but wish for the company of noble men. Likewise, I too had the opportunity to be in the company of many such noble men who considered entire Bharat as their family and worked for its well being through building contacts all over. “Nagabhushan was such a noble Karyakarta whom Doctor Ji strived to create through RSS. Once anyone came to his contact, his affection and love enabled them to stay in his contact for a long time. He was born for the sole purpose for serving the nation. As Swami Vivekananda said that we are only but instruments in God’s hands, let us get inspired by Nagbhushan ji and work on the ideals and examples set by him.”

Once the classmate of Nagabhushanji at Shivamogga and former Governor/Rtd Justice Rama Jois spoke on the occasion, “Nagbhushan Ji had dedicated his life to the nation for 60 years. I have a long time association with him of more than 6 decades. We studied together in high school. I later became a lawyer and he became a pracharak and served the nation for six long decades. Every responsibility he used to take up was executed with perfection. For example when he took the responsibility of the Vishwa Vibhag, he used to send ‘rakhis’ to each of his contact all over the world and personally posted them. He never missed this practice even once. His work all over the state and other places has inspired hundreds of karyakartas all over. I have personally witnessed his great work in various fields. He led a complete and inspiring life through ‘seva’ all his life and moksha is guaranteed for his soul”

Shri Sheshadri, long time associate and friend of Nagbhushan, spoke on the occasion and reminisced about his experiences with Shri.Nagbhushan ji. He also recalled the things he learnt from him and the yeoman service he rendered to the society and the way he lived and inspired hundreds throughout his life. He ended his talk by urging everyone to be inspired by Shri. Nagbhushan ji.

DK Sadashiv, BMS said how his simple lifestyle used to take everyone by surprise and was worth emulating by all. His specialty was that he assumed responsibility without much ado about them but executed them to perfection, Shri. Sadashiv recalled. He was an extraordinary person who lived an ordinary life, he said.\ Smt. Dhanyata of HSP, who worked closely with Nagbhushan ji recalled how close he was to all and was referred to as ‘appaji’ and ‘mama’ to the sevavratis (Full-time volunteers) at HSP. She recalled the kind of love and concern he had for every volunteer by quoting several real-life examples.  He was a ready repository of contacts all over the country and never did anyone have a problem to travel anywhere in the country over work due to Nagbhushan Ji, she said.

Shri. BV Shesha, a friend and close associate of Nagbhushan Ji recalled how as Prant Karyalaya Pramukh he faced several challenges in the responsibility and executed them all with aplomb. He reminisced as how one of his primary characters was frugal and wise spending of money.

Condolence messages from several prominent personalities like PM Narendra Modi, karyakartas of Vishwa Vibhag and Hindu Swayamsevak Sangh, and others were read out on the occasion.

The event ended by everyone offering floral tributes to Nagbhushan Ji. 'Graam Vikaas' is a key for 'Sarvangeen Unnati' of the nation: RSS Chief Bhagwat 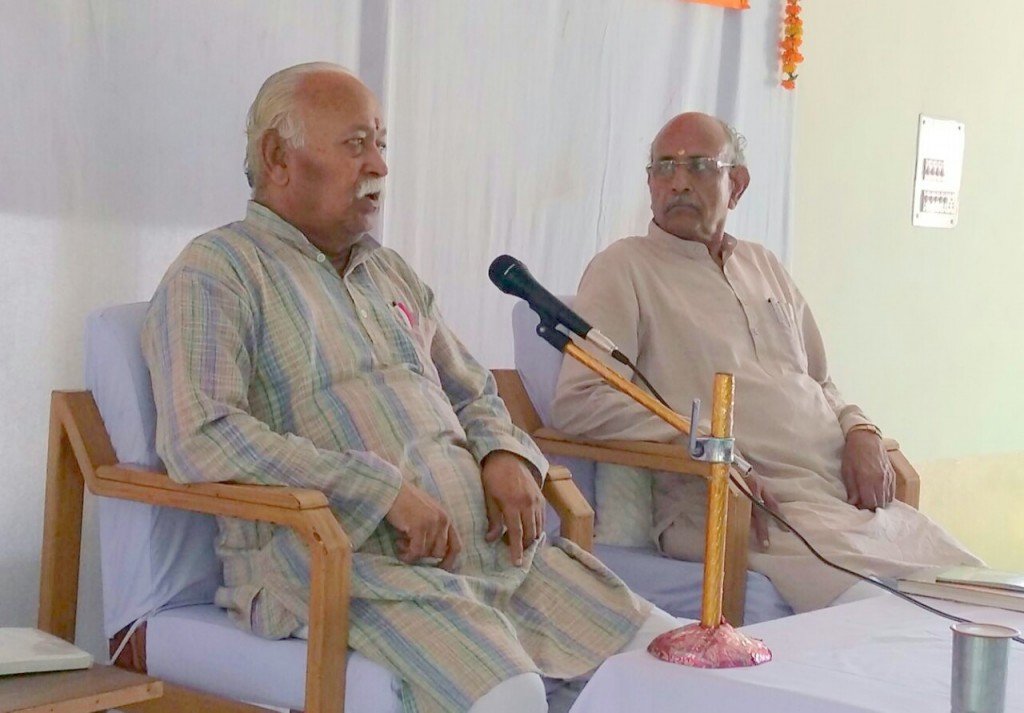