At 92, M.G. Vaidya has seen it all when it comes to the nine-decade-old history of the Rashtriya Swayamsevak Sangh—the three bans, isolation, internal conflicts over joining politics, ferment and resurgence, changing power equations with the BJP, and finally the storming to power [of the BJP] with a forceful majority in 2014.

The RSS is “unfolding” and “in bloom,” says the patriarch, former spokesperson and ideologue of the Hindu nationalist organisation. The Hindu met him at his Nagpur residence and spoke on the context of the recent coordination meeting between the top brass of the RSS and the Modi government, attended by the Prime Minister himself.

Has the RSS now truly come out of the shadows? Meetings between the BJP and the RSS leadership are nothing new, even while the party was in power under Vajpayee. But then things were discreet….

The media is coming to know of it now; that such meetings exist…because [top NDA] ministers attended the meeting. Earlier too, they [BJP Ministers] would come. L.K Advani would come. Because Modi has come to power, the media’s attention has shifted to this. Nobody would come to cover these meetings earlier. When I became the first spokesperson, in our first press conference there were only two people (laughs).

There are strong allegations that the country is being run from Nagpur—the remote control of the Narendra Modi government is in Mahal, the RSS headquarters.

(Chuckles) Our remote control is Modi? Or [VHP leaders] Togadia or Ashok Singhal? I am amused by these allegations. How is it possible? Are we experts in different fields? For example, the Adhivakta Parishad (RSS’ lawyers’ cell) runs its own services. What advice can I give it? Because Modi, BJP is in power in centre, the media is engaging in allegations that RSS controls…

But don’t senior RSS leaders and cadre feel more ownership over the government today? The Ministers presented their ‘report cards’ to the RSS…

No such thought can come to my mind. The Prime Minister is a swayamsevak. I am happy. Even if a swayamsevak becomes a collector, I will be happy. As a collector, it is protocol that he will not attend the shakhas. But there is guru dakshina and on particular days he will come and sit in the audience [of the RSS?]. RSS need not progress because of any government help. There are so many [RSS-run] Vidya Bharti schools, but they don’t take any grant from the government (BJP). RSS members can go to any political party.

Are you happy with Prime Minister Modi? Is he working according to the RSS agenda?

That is not required. He needs to work to his ideology. What is the RSS ideology? The Nation; cultural nationalism. He is working well, increasing India’s pride globally. The RSS’ goals, its long-term aspirations cannot be fulfilled just by a political party. They need to prepare their goals in the light of cultural nationalism, which we call ‘Hindu Nation.’

Has RSS-BJP coordination improved over the years?

It is not necessary to have coordination. The method is, there is some person in-charge of so many activities, who need not come to the general secretary or the sarsanghchalak. Now, Ramlal and Ram Madhav (general secretaries) are in the BJP, they are both pracharaks. Do they not know what the RSS wants? Is it necessary for Modi and Amit Shah to come and consult? People say the RSS is guiding BJP. The RSS is ‘in it’ and ‘outside it.’ Does not Modi know what RSS wants? He was a full-time worker for so many years. Is it necessary to guide and direct Ashok Singhal? This coordination meeting happens every year or once in two years. And for the Akhil Bharatiya Pratinidhi Sabha meeting, representatives of all these [Sangh Parivar] organisations meet. Those who want to ask them questions on what they did over the year can do so. Yes, there are also special coordination meetings, where activities connected with the masses are discussed. Like the political outfit [BJP] or the VHP, or BMS, or Vidyarthi Parishad. All these will be present at the All-India meeting. Strength of the delegations may vary but all these units are represented. In every outfit, you will have Sangh full-timers.

A senior RSS leader told me that the ‘RSS does not change, only the approach of people towards it changes.’ How has the organisation changed over the years?

It is in vikas [development]. This ‘unfoldment,’ is this not a change? From a bud, you become a flower. It is blooming. Just like ‘Hindu’ is a growing tradition, the RSS is growing. Blooming of the RSS means blooming of the organisation of the entire society.

The spotlight has been on the RSS, ever since it ran a successful campaign in the 2014 Lok Sabha elections after Modi came to power. How has the organisation changed after…

[Interrupts] Have you heard any RSS functionary giving a direction to vote for a particular party? What Mohan Bhagwat has said is you are a citizen you should exercise your vote. Do I not know whom I am to vote for?

But isn’t his appeal a direct call to vote for BJP?

Naturally…But have you ever heard of any RSS member persecuted for indiscipline? Never. A foreign correspondent once asked me, ‘what is the secret of discipline in the RSS?’ Because, probably, we don’t have any anti- disciplinary action committee. This does not mean there is no indiscipline. I have seen an RSS swayamsevak contest against another RSS swayamsevak. When this happens, we try to make them understand but the RSS will never persecute them.

If the RSS gives advice to the BJP on matters of policy, national importance and politics, why can’t it openly acknowledge its political role? What’s the harm?

Not necessarily. The political interest is the domain of the political parties. How does the RSS come into the picture? Unless asked for, no advice will be given. RSS is inside it and outside it. It does not watch every item. It watches its own shakhas, own problems, and its own 55,000 seva projects.

The RSS is not open to scrutiny…

We understand the importance of publicity but mere publicity cannot become the cause of your strength. The workers are the real cause of your strength. We don’t invite workers. There is no application form in the RSS. We meet a person and invite him to the shakhas. He takes a pledge. Some do not take a pledge. That’s alright. We work in the open. Every day for one hour we meet… The RSS does not fit into any existing model of institution or organisation. The aim of the RSS has been, after independence, the organisation ‘of’ the ‘entire’ society. It is not an organisation within the society, but ‘of’ the ‘entire’ society.

Vyapam scam pertains to a State and it is a State function. Is it a national disaster ? For example, if there is a war against another country then RSS will come forward.

What was the most difficult phase in the RSS’ history?

Definitely, the first ban. (False allegation on RSS on Gandhiji’s Assassination). Everyone was against the RSS—the janata, sarkar and akhbar [people, government and the press].

Value based Family system is the strength of our Society : RSS Chief Mohan Bhagwat

Mon Sep 14 , 2015
Jaipur September 13, 2015:  “Value based family system is the strength of Hindu Society. Because of these values Indian Families successfully stood against all social challenges. As per the concepts of Hindutva, the man and woman are two different expressions of same principle in origin”, said RSS Saarasanghachalak Mohan Bhagwat. He was […] 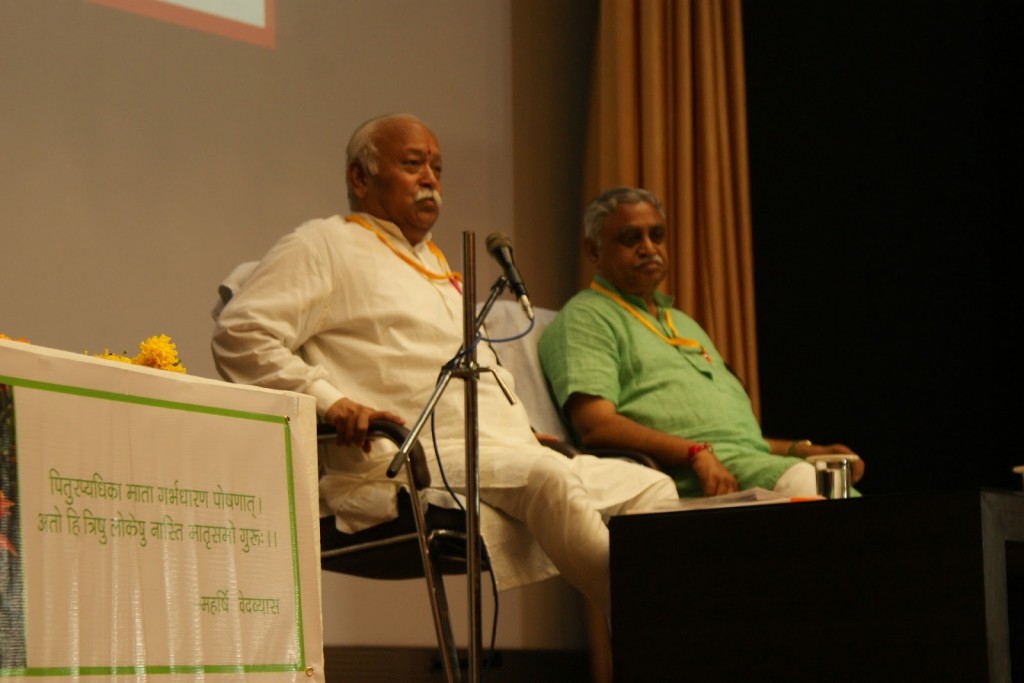