He was delivering a lecture on Current Socio-Political situation in Jammu and Kashmir at Mythic Society auditorium, Bengaluru, organized by ‘Manthana’-  a Bengaluru based intellectual forum for promoting Nationalist discourses.

“While talking about recent elections to Jammu and Kashmir state assembly and PDP-BJP alliance government formation he said “The renewed interest in knowing what is happening in Jammu & Kashmir because there is a government in the state today which seems to many as an unusual type of arrangement. Many are watching the developments of BJP especially after the formation of BJP – PDP government. But BJP has nationalistic signpost as its ideology. And I will assure you we will not do anything that will be against the interest of our country, its unity and sovereignty. Due to the kind of identity politics practiced in state these many years BJP was treated as an untouchable Hindu party. In state general election 2008, held aftermath of Amarnath Andolan when BJP was at peak of its popularity we secured 15 percent votes and 11 seats. But due magic Modi wave in 2014 that swept country, J&K could not escape from that wave.”

“During 2014 loksabha election BJP secured 33 percent of votes in state higher than national average. During last assembly election we worked on a strategy to maximize the gain under the idea 44+. We worked with idea that BJP should be in power in the state. We achieved it, today BJP is in power which was unthinkable five years back and in future whatever type of government will be there in state BJP will be in power.  We have secure largest vote share in the state, 23 percents, and won 25 seats. Two seats are won by Peoples Conference supported by BJP and a rebel candidate from BJP has won. So technically we have same number of seats as PDP which had 28 seats. Now the immediate challenge was to form the government.” “There were lots of ideological difference between BJP and PDP. PDPs chief Mufti Muhammad Sayeed on record had said-BJP and PDP are like north and south poles.  Both National Conference and Congress had offered unconditional support to PDP. However any government without BJP would have been unrepresentative, because entire Jammu was with BJP. Hence we were left with no option but t form the government. All options were sorted out. After all negotiations what is there in Jammu and Kashmir today is governance alliance, an alliance based on common minimum program for the development of the state.”

Explaining the basis of formation of government on common minimum program Ram Madhav assured that “There is nothing in the common minimum program which could be called as compromise. The CMP is dedicated to the development of the state. 80 percent of the CMP deals with development of three regions of Jammu and Kashmir. 10 percent deal with governance issues like fighting corruption, setting up vigilance commission, panchayat elections etc and remaining only 10 percent deal with issues which are contentious. On these 10 percent issues we agreed to disagree and try come to a common understanding. However on these 10 percent issues lots of speculation mongering is going on. On issues like 370, AFSPA I feel we handled in the best possible manner. “

Assuring the commitment of BJP to address the issues of refugees Ram Madhav said “The government will facilitate respectful return of Kashmiri Pandits to valley. Compensatory packages will be given to all refugees, which is pending from decades. The government is committed to give all the privileges of state subject to refugees migrated from west Pakistan, 90 percent of whom are scheduled tribes. As part of CMP commission will be set up to address the long pending demand of delimitation of constituencies in the state.”

Asserting the BJPs strong position in politics of J&K  he said “Today BJP in Jammu and Kashmir has 4 MPs, 26 MLAs, 7 MLCs, 3 alliance partners; a formidable force in the state. We are committed to give a non corrupt development oriented government which the state has never seen before.” “Assuring the commitment of BJP to National integrity he told ”As long as BJP is in power we will assure anything bad will not happen to national integrity. Recently during VHP golden jubilee celebrations Praveenbhai Togadia was prevented from delivering speech in Karnataka and West Bengal, but he held programs in J&K border areas. We will ensure that nationalist voices have their say in Jammu and Kashmir.”

Cautioning about speculations being created in media he said “we have to stop seeing Jammu and Kashmir from Pakistan perspective of international perspective. “ 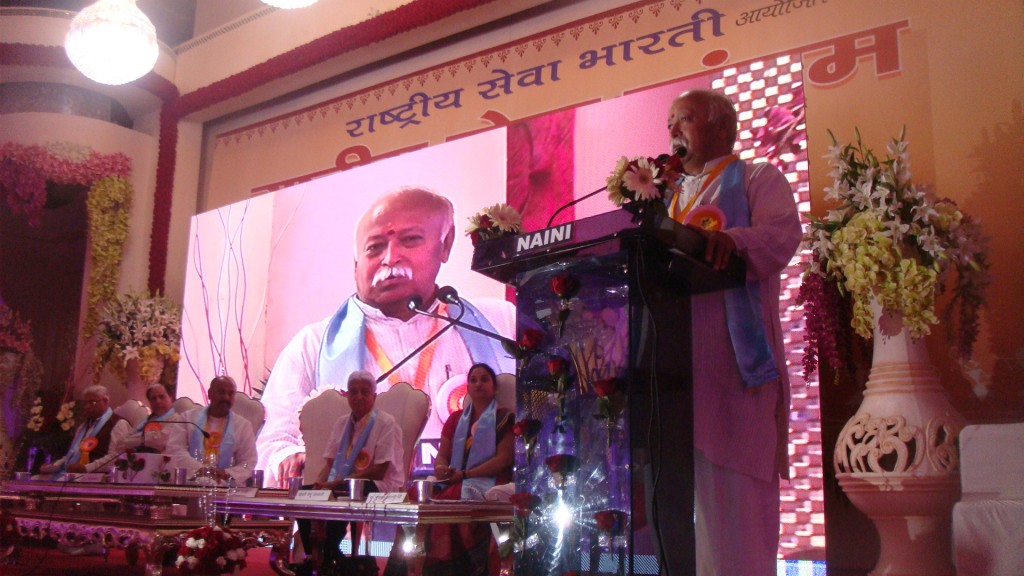