Jigani Bengaluru June 12: In a most unique and first of its kind, ‘GRAAMA SANGAMA‘ a 3-day conclave aimed for Graam Vikaas (comprehensive rural development) was inaugurated today Friday, June 12 at the premises of Prashanti Kuteeram in Jigani of Anekal Taluk in outskirts of Bengaluru.

In his inaugural speech Mangesh Bhende said,” Bharat had a very good system of democracy since ancient times. We had judiciary system here in our villages. We had women judges at the village courts. Impartial judgement were delivered. Rural system was intertwined with mutual confidence and trust within the villagers, hence was known for peace and harmony”.
“We are not measuirng our society by economic strength. However, literature quotes that we had very rich Kingdoms in ancient times. Mahapadmananda had huge wealth at his time. Each individual was contributing so greatly for the wealth of the society.” said Mangesh Bhende.

“Unfortunately Villages is getting deserted, becoming vruddhashramas. Migration of youth from the village is a srious problem. All these happened due to wrong path we took for rural empowerment since Independence. The then Prime Minister Nehru’s theories and principles on development were coated with western mindset. To remain Bharat as Bharat each Individual should contribute for the society. Each villager should be proud and should have respect for his village. If there is a problem in the village, should try correct there itself.” said Mangesh Bhende. “There are several examples of individuals who contributed greatly for the upliftment of their village. Anna Hazare has set a great example for his contributions for the Raleganasiddhi in Maharashtra. The development of the village we call upon is not just economy oriented. There are socio-economic problems in society. We need to focus on eradicating such problems. To bring such a social tranformation, can we do the following?
1. Samajik Shiksha (promoting literacy)
2. Samajik Samskara. (Behaviour with others, members of house, other villagers, outsiders).
3. Samajik Samarasata. (Social Harmony)
4. Samajik Suraksha (Social Security)
Hence we have to try our best individualyl or as a team for the comprehensive betterment of the village.” urged Mangesh Bhende.

Addressing on the occasion, noted social worker Dr Balasubramaiam said ” Since Independence most of the governments ha spent huge amount of money for rural development. But a comprehensive rural development has not happened. Its due to wrong policies and incorrect approach in vision for the rural development. Bharat should remain Bharat. No need to equate or to become country like Singapore, as few of our politicians say. We need to introspect our plan on rural development”.

“One of my American student had once said that, This is the time to copy India and Indian models for America. India was economically leading the world for 16 centuries since AD. India gave importance not just for economy. Our priority was human resource and human capital.” said Dr Balasubramahiam.

“Need of the hour is making each individual socially aware. We need to focus on our Human Capital and Social Capital is essential. Economic Valuation of the society is not necessary. Ideals and teachings from great persons like Vivekananda ideals will help for such a development, by creating men with a social thinking. Each Indian should dedicate one year for the social cause, for upliftment of his own village” urged Dr Balasubramaniam.

The event was declared to be Organic, in which all vegetables, grains used for the Food were from Organic farmlands across Karnataka.  Even the cloth used for the Dhwaj (Flag)  was from Organically grown cotton, colours used were 100% natural. Organisers taken special care to make it eco-friendly and Plastic free.

Nearly 2000 select social workers from different villages of 15 districts of Southern Karnataka are participating in this 3 day conclave. 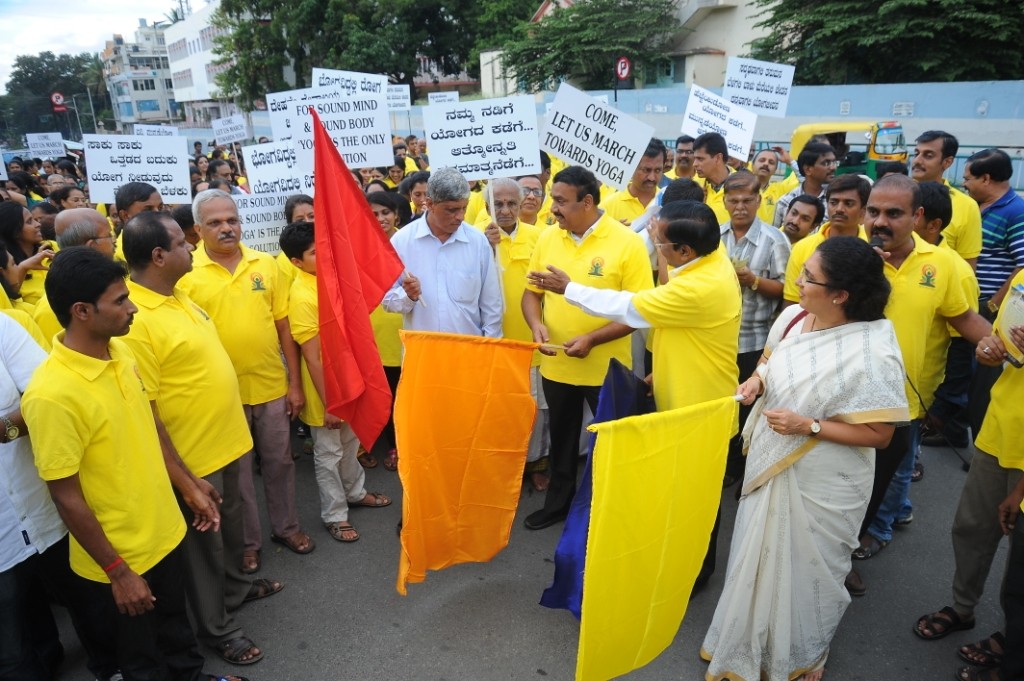